The Duke of Sussex delighted polo fans for the second day on the trot as he wowed spectators alongside his brother at Ascot.

Prince Harry was seen competing in the Audi Polo Challenge today just a day after he thrilled sports fans at a charity match in Oxfordshire.

Last time the 33-year-old was at the tournament all eyes were on his then girlfriend Meghan Markle.

But today he and the Duke of Cambridge enjoyed some brotherly bonding as they took to the turf at the Coworth Park Polo Club. 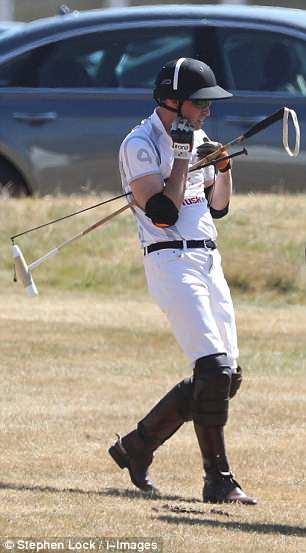 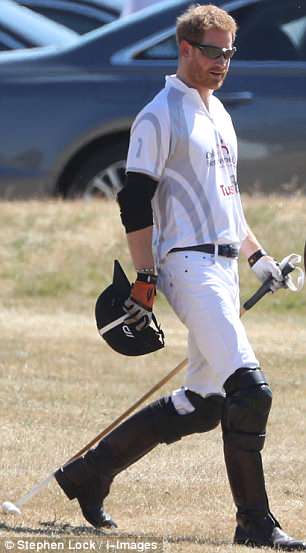 Harry was seen squatting in his riding helmet following on from yesterday, when he made a surprise appearance at British Polo Day in Henley-on-Thames, Oxfordshire.

Friday’s event, which saw Prince Harry and the US-based Valiente team take on the UAE, raised £200,000 for the Royal Foundation and Sentebale, two charities of which he is patron. The Duke of Sussex, 33, kept a low profile as he competed in British Polo Day in Henley-on-Thames, Oxfordshire. Pictured, Harry with world number one Adolfo Cambiaso 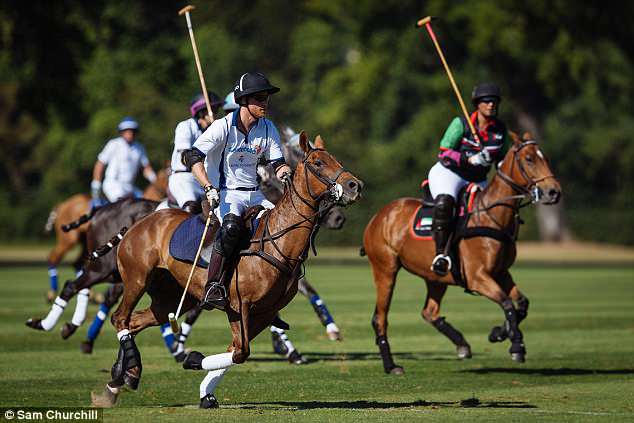 Prince Harry, pictured in the foreground, showed off his skills at the event, which raised £200,000 for the Royal Foundation and Sentebale, two charities of which he is patron 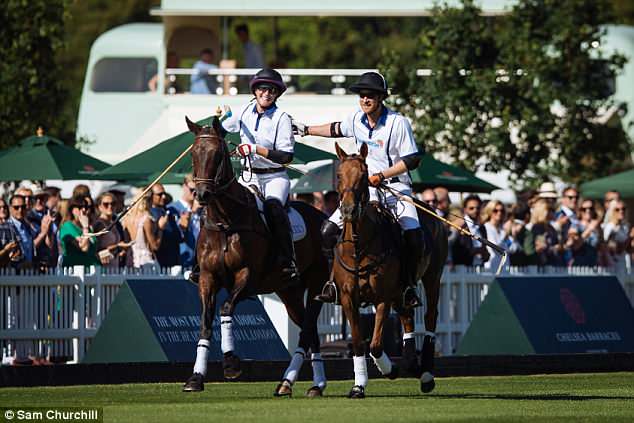 At one point Harry was seen reaching over to pat leading British player Nina Clarkin, 35, on the back after a particularly impressive move. The pair competed for the US-based Valiente team

The night before Harry was joined by Meghan, 36, at an engagement with the Queen but his wife chose to sit out the day at the polo.

The prince appeared in good spirits as he showed off his skills on the field alongside leading men’s polo player Adolfo Cambiaso and women’s star Nina Clarkin.

The teams were competing for the Chelsea Barracks River Field Plate.

At one point Harry was seen reaching over to pat British player Clarkin, 35, on the back after a particularly impressive move. 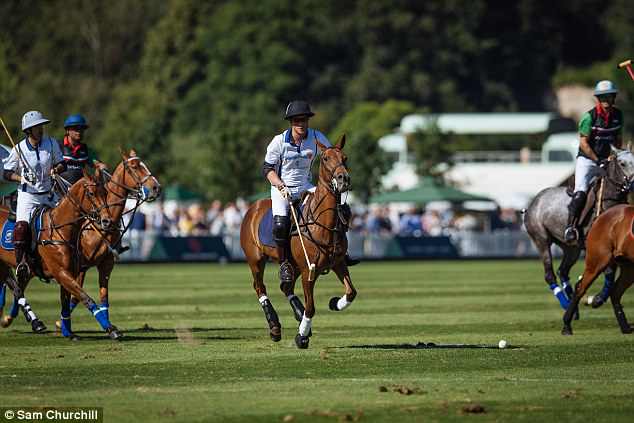 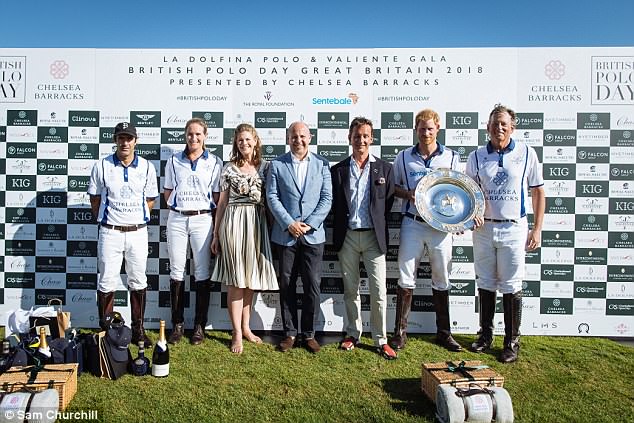 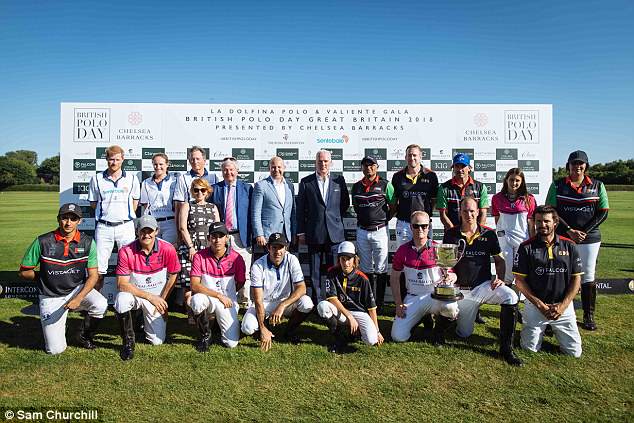 Harry, pictured back row left, has a number of polo matches lined up this summer

Meanwhile Argentina-based Cambiaso, 43, the current world number one, competed for the UAE.

But it was Harry and Clarkin’s team who triumphed and the pair were seen beaming as they posed for photos at the end of the match.

Harry has a number of polo matches lined up this summer, giving Meghan plenty of opportunities to watch her husband in action. 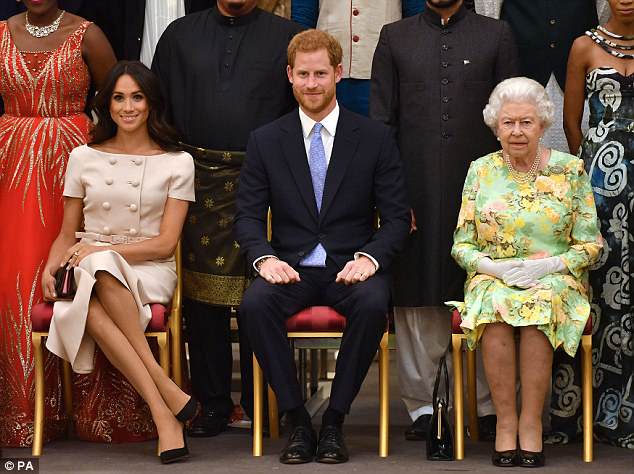 The night before Harry was joined by Meghan, 36, at an engagement with the Queen

The newlyweds made their first appearance as a couple when they attended the Audi Polo Challenge at Coworth Park, Berkshire, in May last year.

The event offered royal supporters one of the first glimpses of the now Duke and Duchess of Sussex together when they were spotted embracing in the car park.

The outing, which saw the duchess being introduced to some of Harry’s closest confidants, give yet another sign of the seriousness of their relationship. 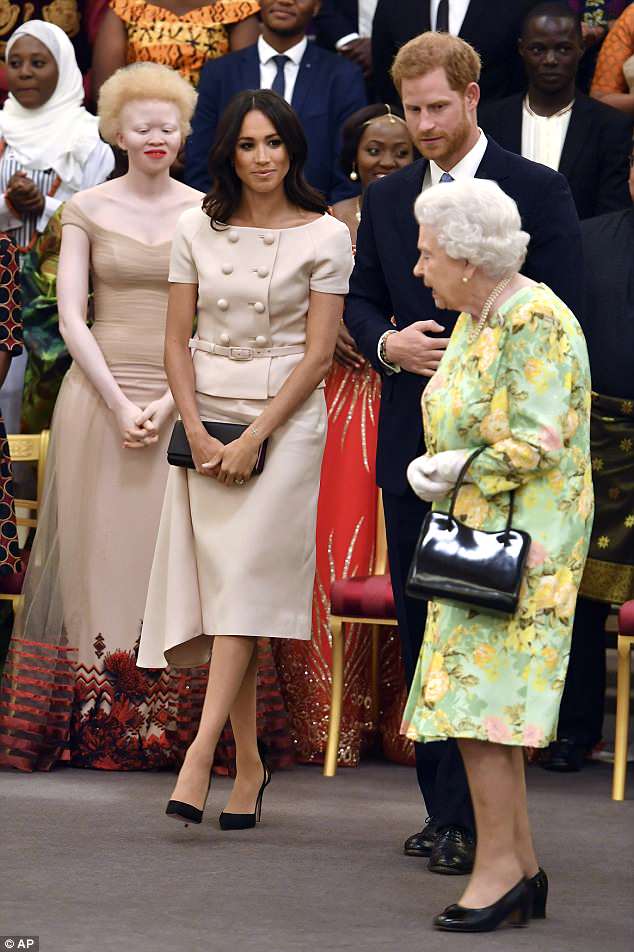 The royals were joined by David Beckham and Sir Lenny Henry, to present awards to winners of the Queen’s Young Leaders for 2018