This is the moment an Amazon delivery man sprinted away from a front porch after creepy Halloween decorations startled him when they started moving and cackling.

His spooked reaction was captured by the homeowner in Eastampton, New Jersey, in hilarious doorbell footage.

In the video, the unsuspecting delivery man goes up to the front porch decorated with what appear to be harmless spooky props of Frankenstein and the Pennywise clown from the movie It.

However, as the figures start cackling and moving he turns around and sprints down the stairs.

Quickly realizing that he’s in no danger from unearthly spirits, the delivery man begins laughing and goes back upstairs to take a photo of the package.

‘Dang they caught me too, I’m going on TikTok, I already know I’m on TikTok,’ he tells the camera. 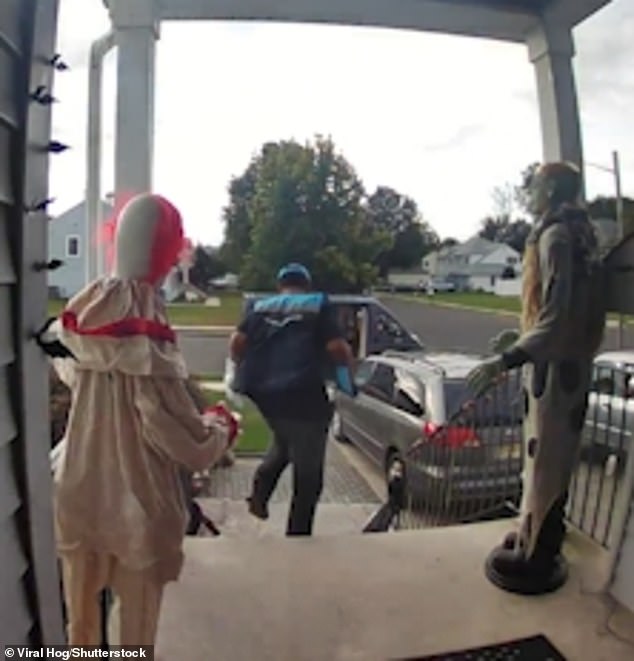 The man sprints down the stairs, startled by the moving and cackling Halloween decorations as he makes a delivery in Eastampton, New Jersey 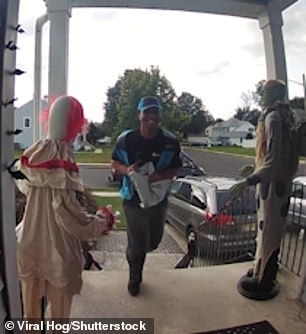 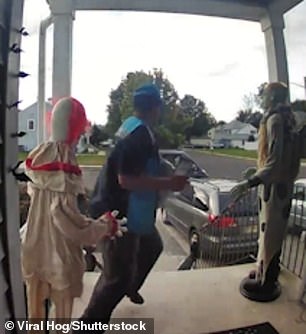 The unsuspecting delivery man doesn’t expect the Halloween props to start moving, cackling and speaking as he goes to drop the package off

The sharer of the video, which took place on October 11, said: ‘My Amazon guy made a delivery and got spooked by my Halloween props, causing him to run down the stairs.’

‘Talk about quick delivery,’ Kimberly Bailey said in comment under the video posted by ViralHog on YouTube.

Another user added: ‘Guys like this will survive horror movies.’