‘You need to answer for your bad behaviour’: Masked Russian hooligan from one of Moscow’s biggest firms warns British fans they will pay if they dare to act up at the 2018 World Cup

Russian hooligans have threatened violence against English football fans travelling to the World Cup next month – unless they behave themselves.

A member of one of Moscow’s biggest football firms told ITV Tonight, that English fans generally meant ‘trouble’, but that no harm would come to those who respected local customs.

Thursday’s Tonight episode explores Russian football hooliganism, raising fears that there may be a repeat of the violence seen during the 2016 European Championships.

It also shows the moment Moscow football fans recently begin chanting ‘monkey’ at a black football player on the pitch, highlighting the shocking levels of racism still prevalent at football games in Russia. 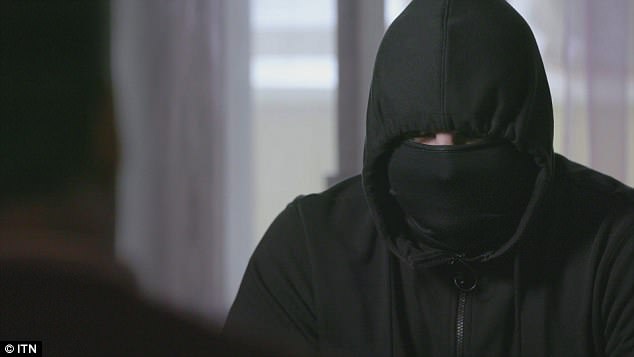 Two years ago, when Russia and England played each other in Marseilles, it was ‘like Christmas, New Years, all rolled into one, five times over’ for Russian football hooligans.

Russian football journalist Sasha Goryunov, said some of his fellow countrymen saw Marseilles as an opportunity to ‘show the English, who taught us how to be hooligans, what we’re up to.’

‘Old-school hooligans, they were about drinking and fighting – the guys in Marseille they were the Fight Club version. 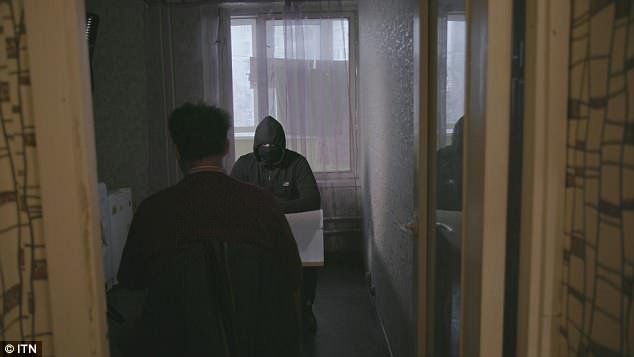 Strong words: The masked hooligan also warned that English football fans visiting Russia during the World Cup would have to ‘answer for their bad behaviour’ 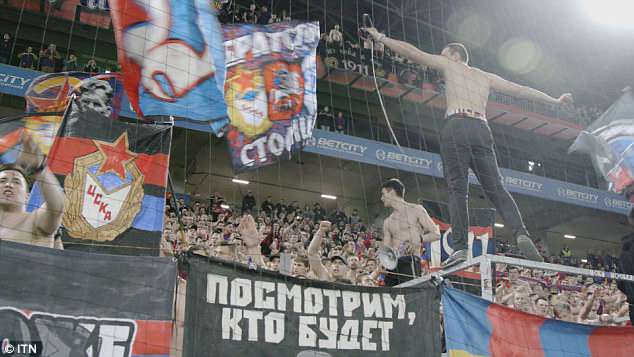 Ahead of the World Cup, which is being held in five Russian cities starting next month, there is a real risk of clashes repeating themselves.

The ‘ultra’ gang-member interviewed for tonight’s show said: ‘Generally, wherever there are English fans, there’s some kind of trouble.

‘No one would like it if someone started p***ing in their front room.

‘If someone starts behaving rudely, we tend not to forgive this bad behaviour.

‘You [the English fans] need to answer for your bad behaviour.’

However, the hooligan, his identity protected by a black balaclava and hood, said English fans would be safe ‘if they behave themselves’ and adhere to Russian customs.

‘What you can do where you are from, you can’t do here, and that’s it.’ 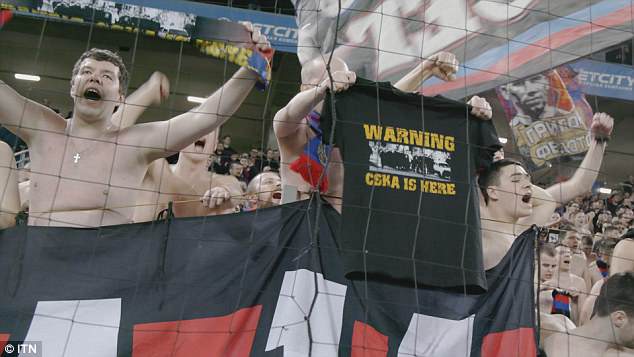 Russian passion: Football fans at the Moscow derby are seen having taken their tops of 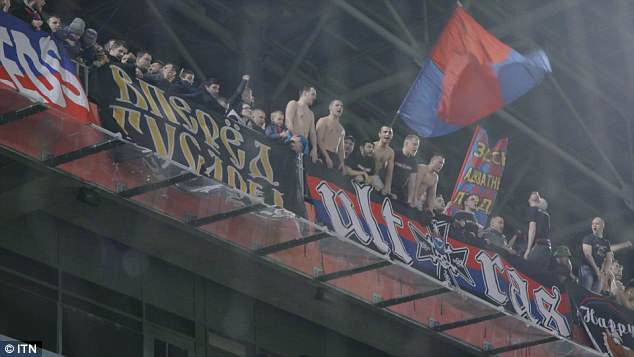 Hooliganism: Russian football hooligans are known as ‘ultras’ and are known to resort to violence during games

As presenter Jonny Maitland attends a football game between two football teams from the Russian capital – CSKA Moscow and Dynamo Moscow – some of the fans begin singing racist chants when a black player is on the pitch.

‘The only black player on the Dynamo team went down, and there were definite monkey chants from the CSKA end.

‘It was unmistakably racist chanting,’ he adds to the camera.