A Russian man is facing charges of extremism for sharing memes online which joked about the country’s bleak future.

Eduard Nikitin, who is unemployed, has had his bank account blocked, his computer briefly confiscated and could in theory face a six-year jail term for ‘inciting hatred or degradation of human dignity’.

He shared one post in which a father crudely tells his son that nothing will get better in Russia, and another featuring a ‘vatnik’ – a padded coat popular in the Soviet period which is also slang for Russians who uncritically follow those in authority.

The case against the 42-year-old is part of a wider trend that has seen Russian authorities bring charges against people for seemingly innocuous, humorous posts in increasing numbers. 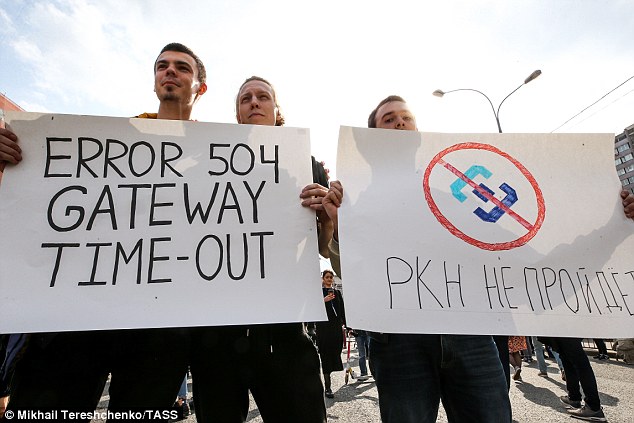 A Russian man is facing charges of extremism for sharing memes online which joked about the country’s bleak future. Pictured: A rally for ‘free internet’ in Moscow earlier this year

The charges he faces carry a maximum six-year jail term, though most convictions lead to a shorter sentence, fine or community service.

‘It turns out that for a harmless joke, anybody who doesn’t agree with our country’s leadership can be prosecuted,’ Nikitin’s lawyer Maxim Kamakin told AFP after a preliminary hearing in Saint Petersburg.

‘It seems that in our country only optimists have the right to exist.’

Such cases are not new but several high-profile investigations, along with an intervention from the operator of Russia’s largest social networks, has dragged the issue back into the spotlight over the last month.

In the Siberian Altai region, legal proceedings were opened more than a year ago against Daniil Markin, a 19-year-old film student who shared memes including a picture of Jon Snow, a character from the Game of Thrones HBO TV series.

Under the image was written ‘Jon Snow is risen – Truly he is risen!’, a play on the Orthodox Easter greeting, which has led to the teenager’s ongoing prosecution on the grounds of religious hatred.

Maria Motuznaya, a 23-year-old who like Markin comes from the Altai city of Barnaul, faces separate extremism charges for images saved on the VKontakte network – Russia’s Facebook equivalent, which rights groups say cooperates with security services.

One of them, featuring apparently African children holding out empty bowls, carries the caption: ‘black humour is like food – not everybody gets it’. 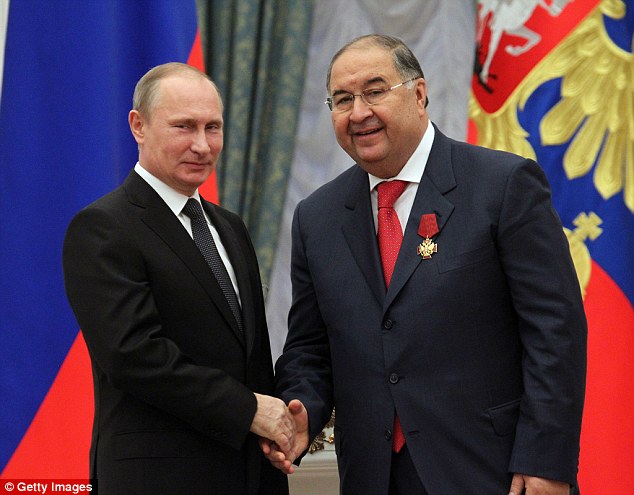 Mail.ru, owned by the Kremlin-friendly billionaire Alisher Usmanov (pictured right with Vladimir Putin), called for a change in the law and an ‘amnesty’ for ‘those unjustly convicted’

Markin and Motuznaya have both said they were pressured by police into signing confessions.

‘Too often the actions of law enforcement agencies clearly do not correspond to the potential threat and their reaction to posts or memes are groundlessly harsh,’ Mail.ru, which owns VKontakte, said earlier in the month.

The company, itself owned by the Kremlin-friendly billionaire Alisher Usmanov, called for a change in the law and an ‘amnesty’ for ‘those who were unjustly convicted and serving time on such charges’.

The Russian communications ministry has also supported a relaxation of the law.

According to the independent rights group Agora, 43 people were given prison terms for internet posts in Russia in 2017, up from 32 the previous year.

Sarkis Darbinyan, a Russian digital rights lawyer, welcomed the request by Mail.ru as a step in the right direction but said he did not expect to see any immediate changes.

‘The main idea behind these policies is to create fear amongst internet users. The aim is to create the impression that authorities are following every network user,’ he said.

‘Many users are already scared of sharing their own thoughts, they’re self-censoring their content, they’re deleting what they shared earlier. That reduces the level of free speech on social networking sites in Russia.’