Save squabbling until it’s over and we’ve partied, NGV president says

Janet Whiting says the best thing for Melbourne right now would be for COVID-19 hostilities to cease.

Ms Whiting doesn’t normally shy away from an argument. As a corporate lawyer who specialises in dispute resolution, she has been in the middle of some of this city’s biggest white collar barneys. 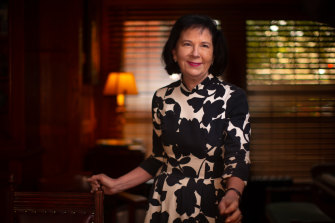 NGV president Janet Whiting says the Triennial can be Melbourne’s ‘coming out’ party. ‘If we can put it on it will be amazing. And we will put it on.’Credit:Simon Schluter

She is concerned, however, that if Melbourne fragments under the pressures of lockdown, it will only make it harder to find a way out.

“My personal view is we must, at the moment, stop the blame game,’’ Ms Whiting told The Age. “I don’t care if it is postponed; all those people who want to deal with those issues, that’s fine, but deal with them later.

“All that is happening is we are giving the nutters authority, which is not what we want. Victoria’s biggest strength has been that it works well together, that relationships are strong, that people can make stuff happen. Where Sydney is a transaction town, we are a relationship place.’’

The pandemic has split Victorian politics and society, with the Parliament divided over the government's latest bid for greater emergency powers, and hospitality and retail businesses frustrated by the slow path out of COVID restrictions.

As the president of the National Gallery of Victoria’s council of trustees, chair of Visit Victoria and a lawyer who has advised state governments and powerful corporations, Ms Whiting is one of Melbourne’s most influential women.

She spoke to The Age as part of a series of stories in which prominent Melburnians offer constructive ideas about Victoria’s way forward from the pandemic.

Ms Whiting says that as serious as the health and economic implications from the pandemic have been, the COVID-19 crisis has also forced positive, lasting change to how important institutions go about their business.

Within the Supreme and Federal courts, the two jurisdictions where she does most of her legal work, modern technology has replaced traditional practices, which means less time wasted on unnecessary court appearances and more filings done online. 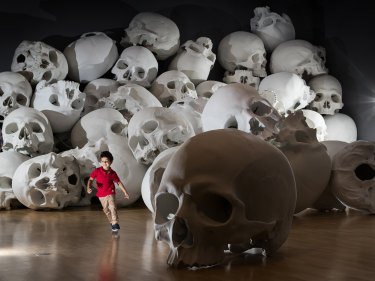 “More change has happened in the last six months than the last 30 years in litigation,’’ she says. “It is quite extraordinary. I have no doubt it will lead to lower costs in court, which is fantastic.’’

At the NGV, the COVID winter gave the gallery an opportunity to substantially develop its online presence.

Ms Whiting says the gallery has had 14 million hits since the start of the pandemic and has been recognised by the Los Angeles Times and the BBC as one of the world’s best digital cultural experiences. This should in turn lead to more renowned art making it onto the gallery’s walls.

“You should assume that many organisations and cultural institutions have not wasted this time,’’ she says. “Our online presence has accelerated way beyond anything we thought would have happened.

“As you are better known globally, more museums and private lenders are happy to lend to you for their exhibitions.’’

Ms Whiting hopes, although can’t yet confirm, that the NGV’s upcoming Triennial, a festival of contemporary art and design for which $9 million in works are commissioned, can serve as the city’s coming-out party.

It is provisionally scheduled for early December but no dates will be set until the Victorian government provides greater clarity about the lifting of COVID restrictions.

“If we can put it on it will be amazing. And we will put it on," Ms Whiting says. 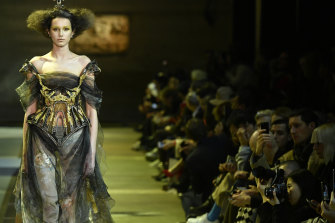 The NGV Triennial is a festival of contemporary art and design.

“You won’t have the numbers you would normally have but that is no reason not to open the gallery and the exhibition if it is safe to do so. With a visual arts exhibition, you can prepare it on the basis you are going to open. If the health situation by that stage isn’t viable, we just mothball it till it is.’’

Ms Whiting says the large spaces and controlled entries of the NGV make it easy to limit crowd density and enforce social distancing. Sparse crowds enhance, rather than detract from a gallery experience.

She says that once government restrictions lift, Visit Victoria will roll out a series of campaigns and events playing to Melbourne’s strengths: food, wine, galleries, sport and fashion.

“The events will vary depending on the state of the pandemic but they will happen,’’ he says.

She also predicts that when this happens, there will be plenty of people in Melbourne willing to spend money.

“There is a lot of people who are frankly, bored. They still have their job, so they haven’t got financial issues, they are saving at a rate of knots and they are desperate to get out and spend. There is going to be stimulus when that happens," she says.

“We just need to stay strong for the next little while and stop bucketing everyone. Remember at the beginning of the pandemic when everyone behaved and the politicians behaved? Can we have that back?’’