Australian researchers have created “model” human embryos from the skin cells of an adult’s arm, in a world-first scientific breakthrough that raises significant ethical questions.

The model embryos, created in a laboratory by researchers at Melbourne’s Monash University, do not use egg or sperm, but ordinary cells that are reprogrammed to replicate the first few days of human life.

When placed in a dish, the model embryos attach – much as embryos would in the uterus – and begin developing.

However, they are not identical to natural embryos, lacking several key features and containing cells not normally seen.

Based on that and data from animals, scientists do not believe they would be able to fully develop – and for this reason they fiercely resist their work being labelled “artificial embryos”.

“I do not feel like I have created life,” said Professor Jose Polo, leader of the Monash team that made the discovery, published on Thursday in the journal Nature.

I do not feel like I have created life.

“I am 100 per cent sure, based on all available evidence, that they can only model the very early stages of development, and therefore they cannot develop into a human.”

Aware of the major ethical questions raised by their work – such as whether a model embryo should enjoy the same protections as a real one – the researchers have so far not let them grow past the 11-day mark.

They and other experts say there needs to be a community conversation over the status of these new creations, what research can ethically be performed on them, and how far they can be allowed to develop.

The Catholic Church, for example, considers that life begins at fertilisation. But Professor Polo’s model embryos do not need fertilisation. 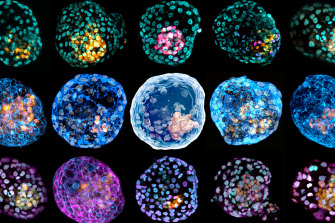 “How religious leaders will take this, I don’t know, to be honest,” said Professor Polo. “We need to remember this is a model. They don’t have development potential. They cannot make a baby. We have to have the discussion. How far can we use these models to model biology?”

The model embryos, which the scientists call iBlastoids, offer a chance to study the earliest days of human development – currently difficult due to ethical restrictions on studying natural embryos.

They could be used to study the causes of infertility, miscarriage, birth defects and why embryos sometimes fail to implant in the womb.

IVF experts will be among those most keen to access the technology. 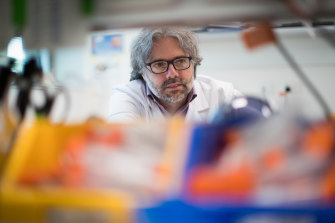 Professor Jose Polo in his lab at Monash University on Wednesday.Credit:Jason South

“These studies show two remarkable things: that the earliest stages of human development do not need an egg, and that it can be achieved using only skin cells, a few genes and the right chemical conditions,” said Jason Limnios, a researcher at the Clem Jones Centre for Regenerative Medicine at Bond University, who was not involved in the research.

The cells created by Professor Polo’s lab closely resemble blastocysts, the name for an egg in the days after it has been fertilised by sperm but before it implants on the wall of the uterus.

Their development into model embryos was pure serendipity, followed by meticulous science.

Professor Polo’s team was working with skin cells, manipulating their genetic instructions to turn them into stem cells – cells that, with a little prodding, can become any other type of cell.

But about 2 per cent of the cells were not behaving properly. Rather than turn into stem cells, they turned on a grab-bag of unexpected genes – the same ones an early embryo would turn on in the days after it is fertilised by a sperm.

Spread out on a flat Petri dish, these strange cells simply sat there. Wondering what the cells might do in close proximity to each other, Professor Polo’s team placed them in a small jar shaped like an upside-down pyramid, the cells squashing together at the bottom.

Five or six days later, Professor Polo’s team returned to the jars to discover the cells were no longer just sitting there. Instead, they had self-assembled into tiny balls. When they studied these balls, they discovered that inside each was a second, smaller ball – the primitive endoderm and embryonic stem cells that would, in a real embryo, eventually become a human.

Suddenly aware of what he had done, Professor Polo stopped the experiment. He contacted Monash University’s ethics board, as well as the federal government’s Embryo Research Licensing Committee. 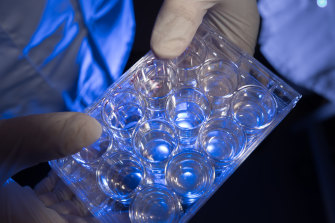 Professor Polo holds a series of wells similar to where the cells were grown.Credit:Jason South

“It took months for them to get their heads around this. Eventually, they said they would like us to stop creating them until we decide how to proceed,” Professor Polo said.

The regulator said on Wednesday that it viewed the cells as meeting “the definition of a human embryo in the Research Involving Human Embryos Act 2002” and would regulate them as such – meaning that research can continue but, for now, the model embryos cannot be developed further than 14 days.

But the researchers and independent scientists are at pains to stress they do not believe they have created life, nor viable embryos.

“I don’t think their models of embryonic development are a replica, or will ever be,” said Megan Munsie, a professor of ethics, education and policy in stem cell science at the University of Melbourne.

“The biology is so complex it would be extremely challenging, and that’s what we’re seeing in the animal work.”

But an editorial by leading developmental biology experts Yi Zheng and Jianping Fu, published alongside the research in Nature, points out these kinks are likely to soon be resolved.

“As protocols are optimised, these blastoids will more closely mimic human blastocysts,” they write.