When you walk through Melbourne’s CBD, besides the numerous empty storefronts, the most noticeable change is the proliferation of electric scooters. They are hard to miss. Brightly coloured, they stand, lean and lie scattered around the city.

They are part of a one-year trial, which began last week, of 1500 e-scooters from Neuron Mobility (orange scooters) and Lime (green and white) that have been distributed across the municipalities of Melbourne, Port Phillip and Yarra. It did not take long for them to become a talking point. 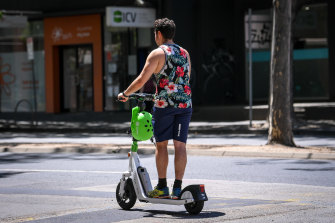 A Lime e-scooter rider in the CBD travels without wearing the available helmet.Credit:Eddie Jim

Travelling at good speed, they can be seen scooting along on roads, footpaths and everything in between. It’s not meant to be that way. There are rules. You must be over 18 and wear a helmet; their speed is restricted to 20km/h; you cannot carry another person; and they should be ridden only on bike lanes, shared paths and low-speed [50km/h or less] roads. Footpaths are supposed to be off limits.

The police were quick to crack down on errant behaviour. On the first weekend the scooters were available, officers recorded 38 offences that mainly involved riders running red lights and not wearing helmets. But there is no shortage of footage of riders ignoring the rules and people telling of either having a near miss or being struck by an e-scooter. While this is unsettling and potentially dangerous for pedestrians, a Queensland University of Technology study indicates that the greater risk of injury is to riders who come unstuck.

It should hardly come as a surprise. The e-scooter-hire craze has expanded globally to more than 100 cities, mostly in Europe and America, during the past few years. Many people have embraced electric bikes and scooters as a means of getting out of their cars and filling the gap in public transport for trips that are too far to walk or don’t follow transport routes. But concerns about rule breaking and safety have followed them at every turn. In Stockholm, where e-scooters were introduced in 2018, authorities have dramatically cut by about half the number allowed to be hired, after growing concerns about them being strewn across the city. Paris cracked down on them last year when a pedestrian was killed after being struck by one.

In Australia, Brisbane was first off the block, kicking off a trial in 2018, but Adelaide, Hobart and Canberra have also followed suit. The trials have been met with mixed reviews. Two councillors in Hobart recently called for the trial there to be put on hold over safety concerns and the Queensland government is considering new ways to crack down on illegal use of e-scooters.

To keep them on the streets of Melbourne, there are some lessons that can be learnt from other cities. The most obvious is the need for an expanded campaign to educate people on how to use them safely. The e-scooter hire companies should be forced to step up. While police have a role to play in enforcing the rules, until there is a broader understanding of requirements, policing will have limited impact. Another step would be to keep a strict limit on how many e-scooters can be left out to be hired. Experience shows that people get fed up if too many clog up the footpaths. Set parking spaces would also help.

The City of Melbourne has done much in recent years to constrain the use of cars while encouraging people to use public transport and cycling. E-scooters could be a welcome addition to this strategy. But they must be brought in safely and in a way that limits the chaos on already crowded roads and footpaths, otherwise they will soon lose favour with Melburnians.