Seattle authorities are hunting a purple-haired woman suspected of grabbing a pregnant woman by the hair at an airport, throwing her to the ground and snatching her two-year-old son – before Good Samaritans who witnessed the broad daylight kidnapping attempt saved the boy from his captor.

The woman, whose identity and whereabouts are unknown, was pictured in several photos released by the King County Sheriff’s Office Saturday with dyed purple hair and wearing a neon pink shirt, gray and pink athleisure pants and carrying a pair of black and neon pink sneakers in one hand.

Authorities say she is the same woman who grabbed a two-year-old boy as he held his mother’s hand at SeaTac’s Angle Lake Park Tuesday afternoon. The female suspect “attempted to flee with the boy after throwing his mother to the ground by her hair,” the sheriff’s office said. 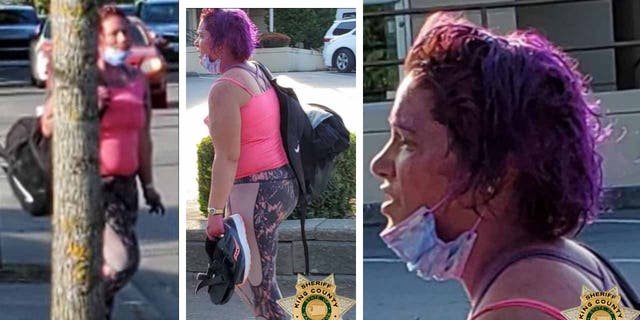 Good Samaritans rescued the boy and reunited him with his mother, authorities said. The suspect left the park on-foot then boarded a Metro coach. The boy was not hurt, and his mother, who is seven months pregnant, was checked at a nearby hospital as a precaution, the sheriff’s office said.

The King County Sheriff’s Office Major Crimes Unit seek the public’s help identifying the woman, who is now wanted for attempted kidnapping and assault, as “community safety is the highest priority for the deputies and detectives serving throughout King County.”