‘We will be clapping loud and proud!’: Millions of Britons pledge to once again applaud NHS heroes and frontline staff battling coronavirus pandemic in second Clap for Carers tribute tonight

Millions of Britons are set to join together this evening in the second weekly Clap for our Carers celebration.

Last week, people from around the country stood out on their doorsteps to clap for a minute as a thank you for the brave NHS staff battling the coronavirus pandemic.

Prime Minister Boris Johnson was photographed outside Number 10 alongside his chancellor Rishi Sunak. 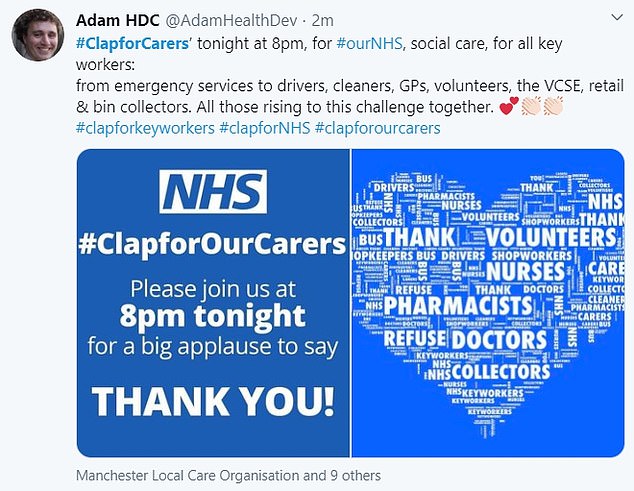 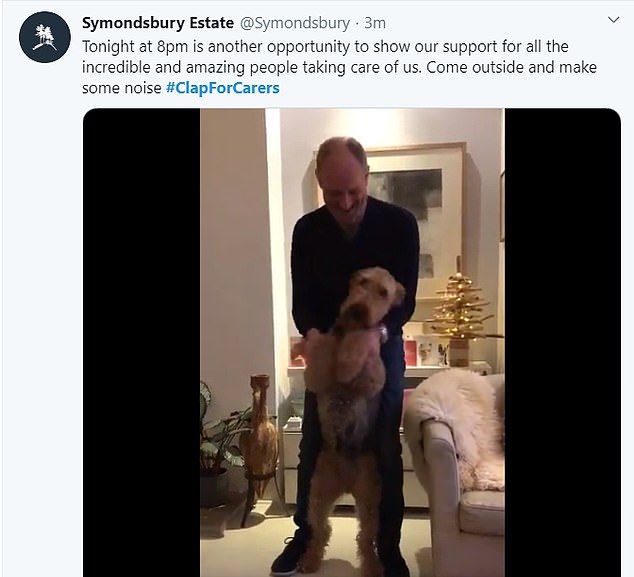 Last week, thousands of people filmed themselves clapping to honour NHS and other frontline staff who are risking their own lives in battling the coronavirus

Hours after being photographed celebrating the NHS, Mr Johnson was forced into self-isolation after being diagnosed with Covid-19.

Tonight’s Clap for our Carers event, which is scheduled for 8pm, will concentrate on healthcare workers, emergency services, armed services, delivery drivers, shop workers, teachers, waste collectors, manufacturers, postal workers, cleaners, vets, engineers and ‘all those who are out there making an unbelievable difference to our lives in these challenging times’.

People are asked to come to their front doors or windows – while maintaining social distancing rules – and clap for a full minute.

Similar expressions of gratitude have been held in Italy and Spain, which have been hit incredibly hard by the coronavirus outbreak. 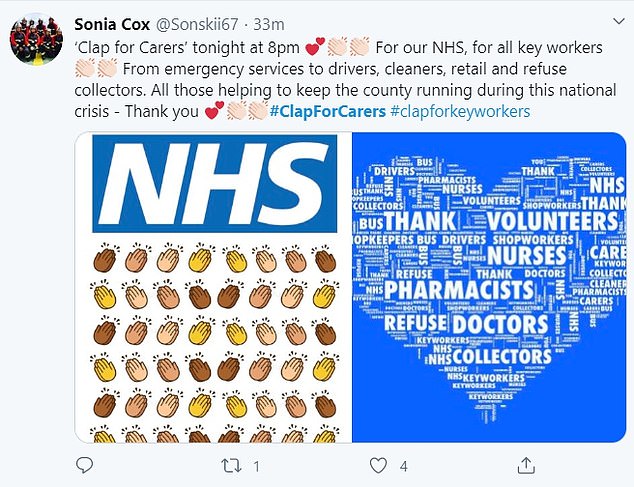 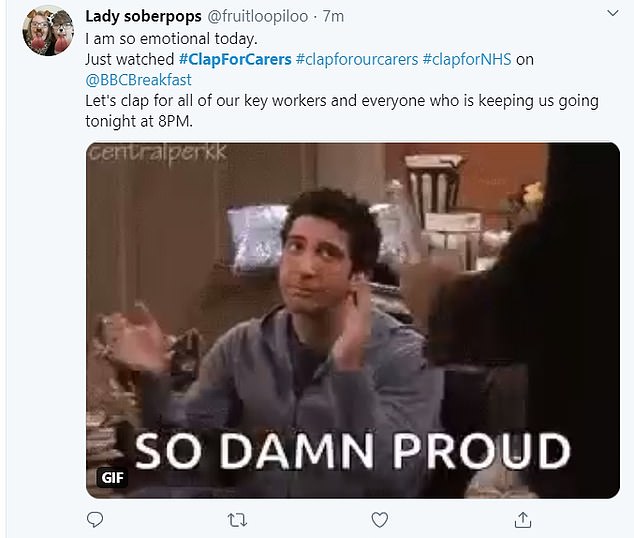 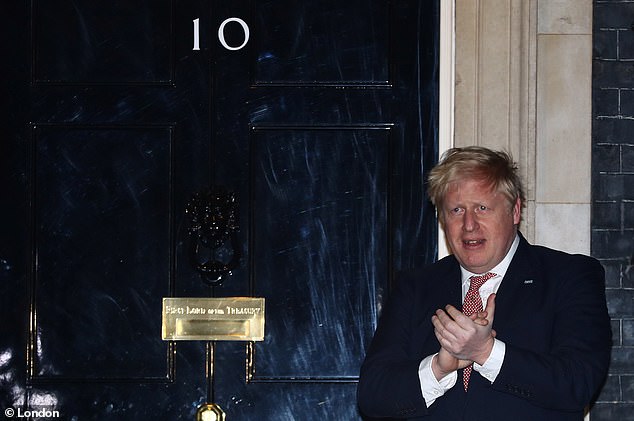 Last week, Boris Johnson joined the British people in clapping from the steps of Downing Street just hours before it was confirmed had developed Covid-19 symptoms

The government has faced criticism over its failure to test enough people for Covid-19, including the 500,000 NHS frontline workers.

Johnson’s message, posted on Twitter on Wednesday evening, followed pledges from his ministers to accelerate testing in the days and weeks ahead after a slew of sometimes contradictory statements on the numbers already checked. 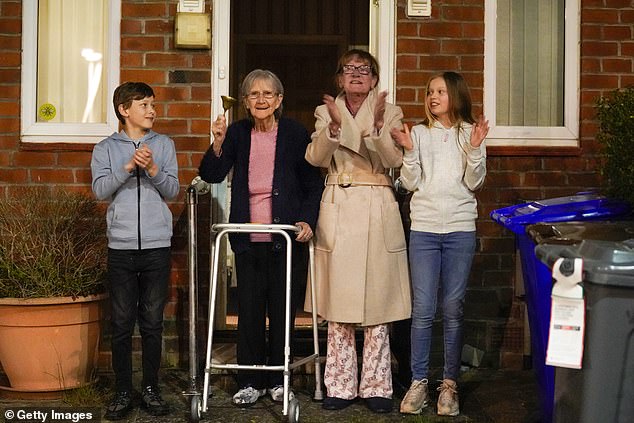 People from around the country stood outside briefly, pictured here across the road from the Wythenshawe Hospital in Manchester 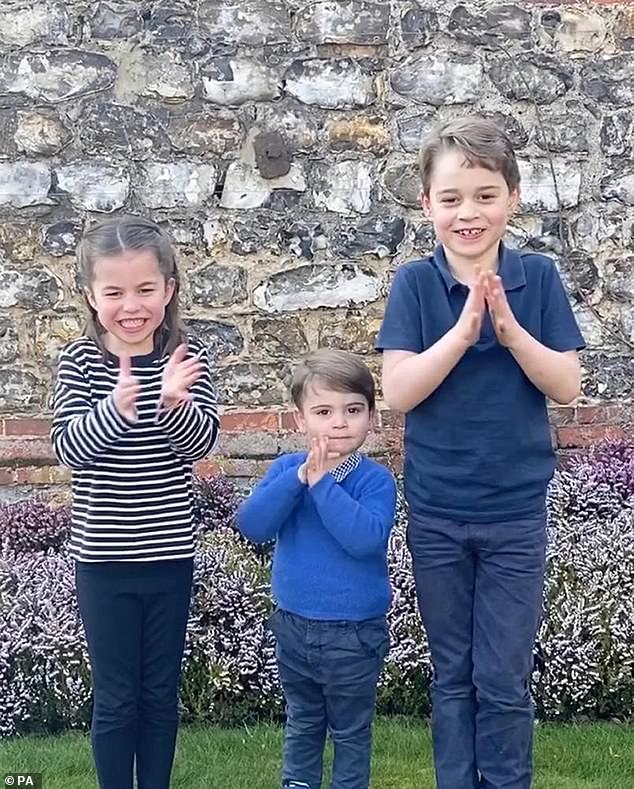 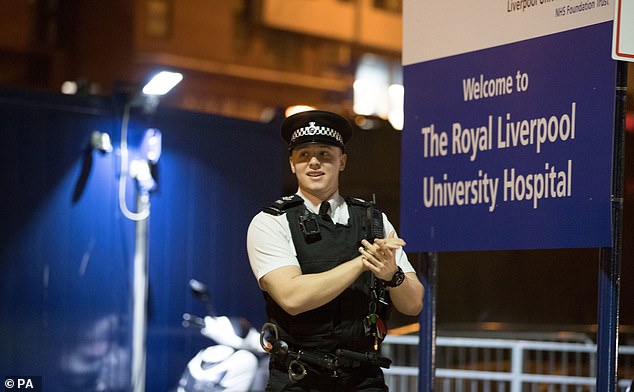 While Germany has been testing about 500,000 people a week, Britain’s current capacity is about 13,000 a day, a figure the government said it was aiming to double by mid-April.

Tests are essential for both fighting the virus and nursing the economy back to health after what is expected to be the worst quarter in around a century.

Testing frontline health staff allows those with immunity to return to work while broader testing of the population would allow tens of millions of idled workers back to work.

So far, tests have been focused on those suspected to have the virus and admitted to hospital, but the government plans to increase testing of frontline healthcare staff to hundreds of thousands in coming weeks.

He added: ‘What we need to do is massively ramp up not just tests so that you can know whether you have had the disease in the past – so-called antibody tests – so that will enable you to go to work in the confidence that you can’t be infected or infectious.’

Ministers have suggested shortages of necessary chemicals were a factor, though the industry has said the necessary reagents are being manufactured and delivered to the National Health Service.

NHS staff in Lewisham and Greenwich have filmed themselves thanking the general public for heeding the warning about staying at home to save the health service.

The frontline staff in London were filmed wearing protective equipment after completing their shift battling the coronavirus menace.

Britain has reported almost 30,000 cases of Covid-19 with some 2,352 deaths. Yesterday, more than 500 were reported to have died in hospital over the previous 24 hours.

Experts hope new social distancing restrictions introduced last month will soon have in impact on the spread of the disease.

Before the restrictions, each infected person was believed to pass on the disease to more than two other victims.

As a result of social distancing and the lockdown, each person is passing the disease onto less than one other person. 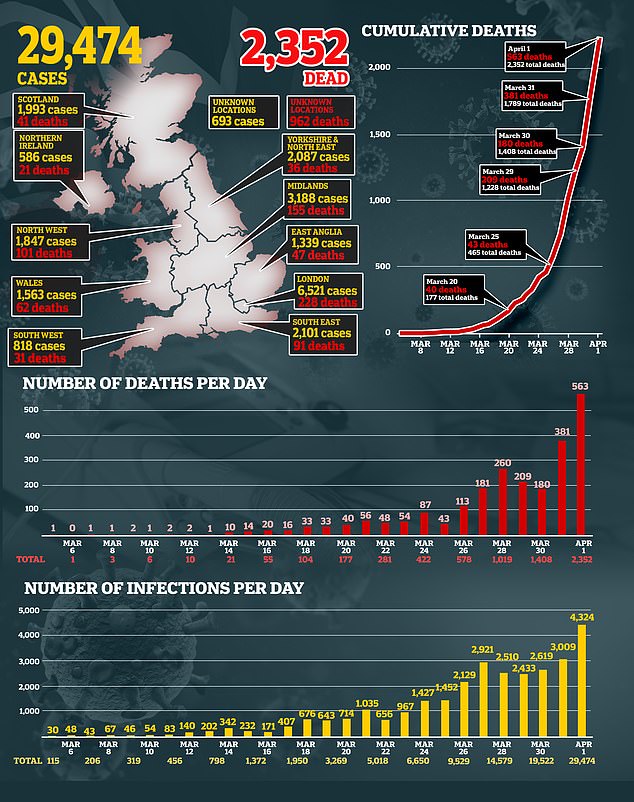