Buenos Aires: If Saudi Arabia's Crown Prince was worried about getting the cold shoulder from world leaders at the G20 summit, Russian President Vladimir Putin gave him a warm welcome.

In a moment that quickly went viral, Putin approached Mohammed bin Salman with a huge grin and held his hand high in the air. The Crown Prince responded by giving Putin a high-five that morphed into a handshake.

The gregarious greeting between the Russian President and the Saudi Crown Prince was like a car alarm blaring in a library, in a setting where handshakes and subtle body language are closely parsed for meaning.

It lasted only seconds but Putin and the Crown Prince, both known for ruthlessly repressing their critics, seemed almost gleeful at their encounter as they took seats next to each other at the meeting.

The interaction left social media observers aghast, some dubbing it the "secret murderer's handshake" and a "pretty damn chilling" scene.

The Saudi ruler's presence at the summit is seen as a test of his future status on the world stage in the wake of the Jamal Khashoggi murder.

The Washington Post columnist, a critic of the Saudi regime, was strangled and dismembered inside the Saudi consulate in Istanbul on October 2 by a team of Saudi operatives who played music to drown out the sounds of the killing. 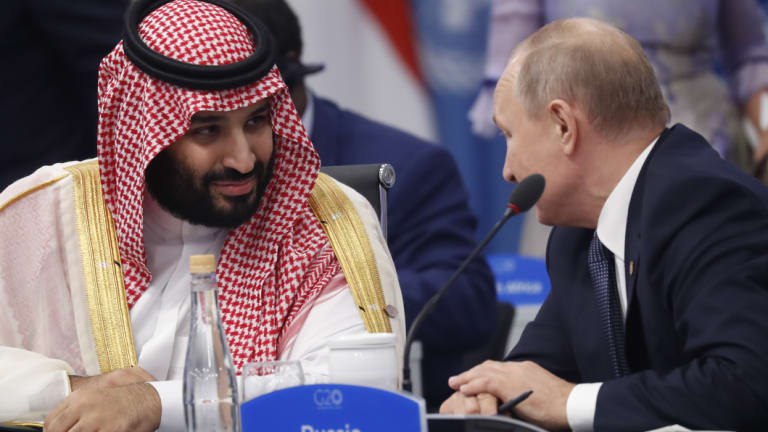 The Crown Prince, Saudi Arabia's de facto ruler, has denied any involvement in the murder, but US intelligence officials believe he directed the operation.

Putin has faced numerous accusations of ordering the killings of Russian spies and operatives who have defected to Western countries. The United Kingdom have accused him of orchestrating the poisoning of former double agent, Sergei Skripal, and his daughter, Yulia, in Britain earlier this year. 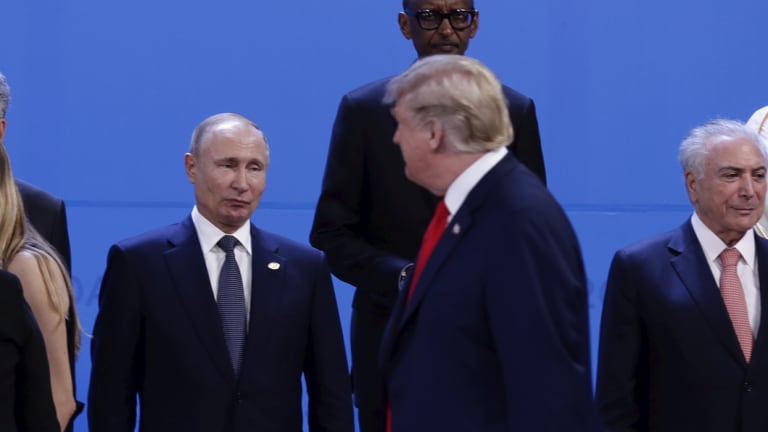 Eye off: Russian state TV reported that Vladimir Putin and Donald Trump did not greet each other.Credit:Alex Ellinghausen

Russia's state TV reported that Putin chose not to greet President Donald Trump, who was standing nearby.

Trump could be seen briefly in the background during the G20 exchange, which played repeatedly on cable news, but it was unclear if he witnessed the greeting. He took his seat at another part of the large, circular table where world leaders are gathered.