Washington: Serbia and Kosovo have agreed to normalise economic ties, a breakthrough in a political stand-off over Kosovo's declaration of independence in 2008 that US President Donald Trump said resulted from his involvement.

The agreement signed at the White House is short of the full diplomatic recognition that Kosovo seeks and that the Trump administration and the European Union have both worked to achieve. 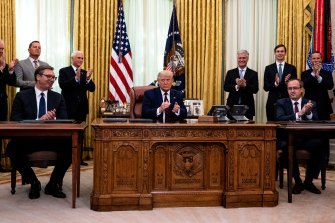 "It's a first step," said Richard Grenell, Trump's former ambassador to Germany who has been the main go-between for a two-year effort to break a diplomatic impasse.

The deal will encompass freer transit, including by rail and road, Grenell said, and clear away other barriers to commerce.

Serbia does not officially acknowledge Kosovo's independence, which was midwifed by the George W Bush administration nine years after NATO conducted a nearly three-month air strike campaign against Serbia. The country had waged a bloody crackdown against the ethnic Albanian minority population in Kosovo.

Both countries – part of the former Yugoslavia — agreed, for a year, to freeze campaigns advocating for and against normalising political ties, said US officials, who nevertheless lauded a handful of economic measures as significant progress in the relationship between the two sides.

Speaking in the Oval Office flanked by the two countries' leaders, Trump said Serbia had also committed to moving its embassy to Jerusalem, and Muslim-majority Kosovo and Israel had agreed to normalise ties and establish diplomatic relations.

"We've been working on this for almost from the beginning of the administration. And you had some deep-seated feelings and there was a lot of fighting, and now there's a lot of love," Trump said.

The announcement follows a US-brokered agreement in August to normalise relations between Israel and the United Arab Emirates. Israel has since said it would follow that agreement with similar deals with Oman and Bahrain. Talks of a deal with Sudan have been denied by that country's Foreign Ministry.

Serbian President Aleksandar Vucic and Kosovo's Prime Minister Avdullah Hoti met with US officials over two days to produce the economic document. The two were friendly during the joint appearance with Trump, but only Hoti expressed a wish to work toward full normalisation.

Vucic told reporters there were still many differences between Serbia and its former province, but said the agreement marked a huge step forward.

He later told Serbian media that his country's agreement was with the United States, not Kosovo.

Hoti said the agreement should lead to mutual recognition between the two countries.

Political analysts called the agreement underwhelming and hazy, however.

"In my mind this is more of a resumption of dialogue between the two sides. That’s good for the region. But it’s not like some massive, massive breakthrough," said Jasmin Mujanovic, a political scientist who specialises in Eastern Europe.

Most Western nations have recognised Kosovo's independence. Serbia is backed by its allies Russia and China in refusing to do so. An European dialogue effort under way for formal recognition of Kosovo by Serbia will continue.

"What we wanted to do with this agreement is to create some breathing space," national security adviser Robert O'Brien told reporters. 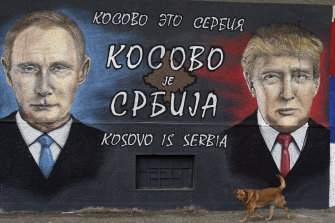 A graffiti depicting the Russian President Vladimir Putin and US President Elect Donald Trump with Cyrillic script that reads “Kosovo is Serbia” in a suburb of Belgrade, Serbia in 2016.Credit:AP

Hoti's participation followed a war crimes indictment against President Hashim Thaci in June. Thaci had sought out Grenell in secret in 2018 and had been the main figure negotiating with the US team. Trump wrote to Thaci and Vucic in December 2018, dangling a potential Rose Garden peace ceremony if they could resolve their differences.

Thaci cannot freely travel internationally because of the indictment, which alleges he participated in atrocities as a Kosovo Liberation Army commander during the 1998-1999 armed conflict between Serbia and ethnic Albanian separatists in Kosovo. He denies he broke any international law.

The fighting in Kosovo left more than 10,000 dead, most of them ethnic Albanians.