If Trump was anybody else, the conventional wisdom would be that he had little to no chance of victory. But given Trump scored such a surprising win in 2016, few are willing to make bold predictions this time around.

The Biden campaign says their internal polling shows a close race and are urging Democrats not to become complacent. Trump continues to insist that not only he is going to win but he will achieve an even bigger victory than four years ago. It's a good thing, in many ways, that people are sceptical of polls: ballots around the world, including Brexit in the UK and last year's Australian election, have shown that polls are not infallible. But it's worth keeping in mind some important ways that this year's election is not like 2016.

The margins: Biden currently leads Trump by eight percentage points according to the RealClearPolitics national polling average. That's almost twice as large as Clinton's polling lead nine days out from the 2016 election (4.3 points) and even bigger again than her lead on election day (3.2 points).

Of course, the election will be decided not by the national popular vote but by the results in a handful of battleground states. If Biden can hold on to the states Hillary Clinton won in 2016 and add the "rust belt" states of Wisconsin, Michigan and Pennsylvania then he will win the Electoral College. He currently leads Trump by an average of 5.8 percentage points in these states, according to the polls. On election day 2016 Clinton was leading in these states by an average of four points.

Polling accuracy: If the polls are dramatically underestimating Trump's support, as they did in several key states in 2016, he can pull off another surprise victory. We won't know until the votes are counted whether that happened. But there are reasons to believe the polls will be more accurate this time around.

High-quality pollsters are more focused on swing state polling than they were four years ago. And many pollsters have taken steps to fix a major error from 2016 when they didn't take voters' education levels into account. This year, more pollsters are "weighting for education", which means they are trying to ensure that college-educated voters, who are more likely to vote Democratic, aren't over-represented in their survey results. 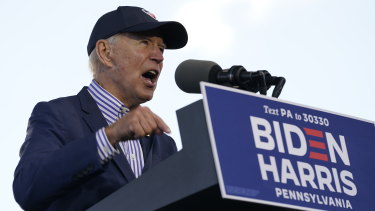 This election campaign has had some blockbuster events. The death of iconic Supreme Court justice, Ruth Bader Ginsburg. Trump's COVID-19 diagnosis and hospitalisation. The party conventions and the presidential debates. But the polls haven't shifted much. Since the start of the year, Biden has led Trump by at least four percentage points in the national polls.

The 2016 election was much more volatile. At two points in the campaign Trump was narrowly ahead of Clinton in the RealClearPolitics average. And Clinton's polls crashed after FBI Director James Comey revealed he was reopening the investigation into her use of a private email server. In the final two weeks of the campaign, her national lead slumped from 7.1 to 3.2 per cent. No event has so far produced a similar hit to Biden's lead.

Favourability: In the 2016 election both candidates were deeply unpopular. Clinton had a net favourability rating of minus 12.6 points. This time Biden has a net favourability rating of just minus 1.6 points, which is essentially breaking even. Clinton had been a controversial figure for decades and was loathed by conservatives. Gender, almost certainly, also played a role. By contrast, Biden is a 77-year-old white man with a reputation as a moderate Democrat, making him a less confronting figure. 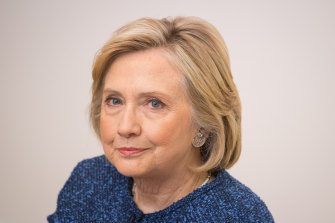 By the end of the 2016 campaign, Hillary Clinton was deeply unpopular with American voters. Credit:Getty Images

The absence of third parties: Reflecting the unpopularity of both major party candidates, the third-party vote was unusually high in 2016. Five per cent of voters cast a ballot for candidates such as the Libertarian Party's Gary Johnson or Green Party's Jill Stein — up from around 1.5 per cent in previous two elections. This allowed Trump to claim states such as Michigan with as little as 47.5 per cent of the vote.

This time around, far fewer voters say they intend to vote third-party. The Green Party isn't even on the ballot in several key states. This increases the pressure for candidates to need to win more than 50 per cent of the vote. 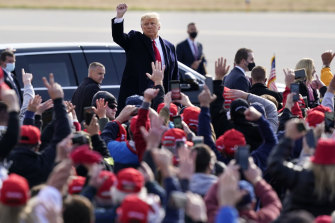 The pandemic: The most obvious way this election is different to 2016 is the pandemic. Particularly for Democrats, it has reshaped the nature of campaigning. They have largely ditched traditional big in-person rallies and door-knocking efforts. More Democratic voters also say they intend to vote by mail or early, while Republicans are more likely to show up on election day. This complicates the turnout models that pollsters are using to predict who will participate in the election. Postal ballots are also more likely to be rejected, which could spell problems for Democrats in states with close results. The upside for Democrats is that they are locking in many solid votes before election day, allowing them to go after less reliable voters in the campaign's final days.

Our weekly newsletter delivers expert analysis of the race to the White House from our US correspondent Matthew Knott. Sign up for the Herald‘s newsletter here, The Age‘s here, Brisbane Times‘ here and WAtoday‘s here.