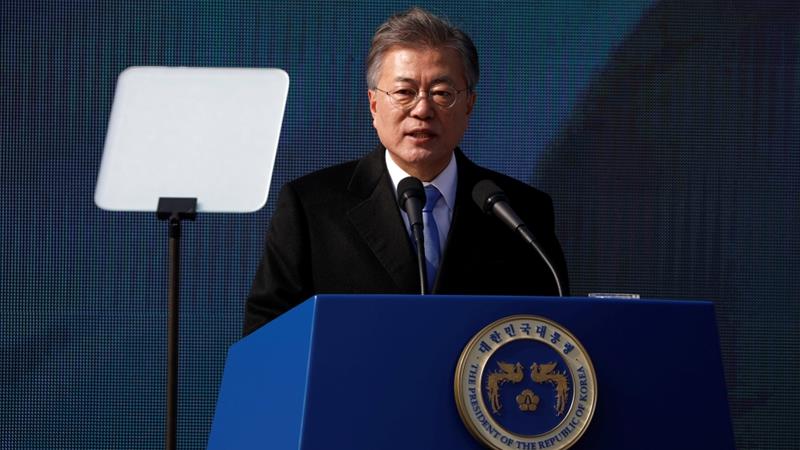 South Korea’s President Moon Jae-in has once again criticised Japan over its wartime use of “comfort women”, calling it a “crime against humanity”.

Moon spoke during a national holiday commemorating the end of Japanese colonial rule, saying that the issue of sexual slavery by the imperial Japanese army had not been resolved.

“To resolve the comfort women issue, the Japanese government, the perpetrator, should not say the matter is closed,” he said.

“The issue of a crime against humanity committed in time of war cannot be closed with just a word. A genuine resolution of unfortunate history is to remember it and learn a lesson from it,” Moon added.

“I hope Japan will be able to genuinely reconcile with its neighbours on which it inflicted suffering and will walk the path of peaceful coexistence and prosperity together.”

The term “comfort women” refers to a Japanese practice during World War II – and before – whereby Korean women, among others, were forced to work as sex slaves in military brothels.

They are said to number in the tens of thousands.

“What President Moon said is against the Japan-South Korea agreement; it is totally unacceptable and extremely regrettable. We immediately lodged a complaint with the South Korean government,” Suga said.

“The agreement is a final and irreversible solution to the issue and Japan has conducted all of the obligations based on the agreement and now urges South Korea to do the same.”

Tokyo and Seoul agreed to the “final and irreversible” settlement in 2015, under which Japan would apologise and pay $9.4m to survivors. But President Moon has repeatedly criticised the deal, saying it is “seriously flawed” and does not enjoy the backing of South Koreans.

“Along with citizens, I, as president, make it clear again that the comfort women issue can’t be settled through this deal,” Moon was quoted as saying last year.

Japan continues to dispute usage of the term which it says contradicts facts.