Beijing: The City of Shanghai has imposed lockdowns on two of China’s best-known hospitals after they were linked to new coronavirus cases.

Outpatient services have been suspended at Fudan University Shanghai Cancer Centre and Renji Hospital, both of which have been cordoned off along with some surrounding residential communities.

The two hospitals were put under lockdown after suspected cases were found at them on Wednesday and Thursday. Shanghai had six of the 103 new cases reported by the National Health Commission on Friday. 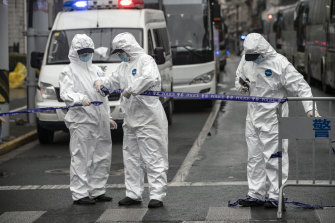 Police officers wearing personal protective equipment (PPE) cordon off a street near the Zhaotong Road neighbourhood, placed under lockdown due to suspect COVID cases at a nearby hospital.Credit:Bloomberg

It’s not immediately clear if any additional cases were linked to the hospitals.

After months of quelling small clusters with mass testing, isolation and social distancing, the country has seen outbreaks grow this winter, mainly in its frigid north.

Lockdowns have also been imposed in parts of Beijing and other cities following outbreaks, schools are letting children start holidays early and citizens have been told to stay home for next month’s Lunar New Year. China hopes to vaccinate 50 million people against the virus by the middle of February. 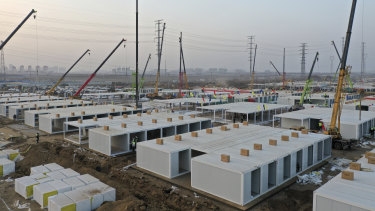 The Chinese government on Saturday finished building a 1500-room hospital for COVID-19 patients in Nangong, south of Beijing, to fight a surge in infections.Credit:Xinhua via AP

Heilongjiang province in the far north reported 47 new cases, followed by Jilin just to the south with 19 and Hebei province just outside Beijing with 18. Beijing itself recorded three new cases.

Chinese hospitals are currently treating 1674 patients for COVID-19, of which 80 are in serious condition, while another 929 are under observation for testing positive without displaying any symptoms.

Meanwhile, South Korea is reporting its smallest daily increase in coronavirus infections in two months as officials express cautious hope that the country is beginning to wiggle out from its worst wave of the pandemic.

Health authorities have clamped down on private social gatherings since late December, including setting fines for restaurants if they accept groups of five or more people. The tougher rules were imposed to slow a virus surge that erased months of hard-won gains. The 1241 infections reported on Christmas Day were the country’s largest 24-hour jump of the pandemic. Daily infections have slowed to around 400 to 600 in recent weeks.

Indonesia reported 346 deaths from COVID-19 on Thursday, hitting a new record for the second time this week, as hospitals come under increasing strain from the coronavirus pandemic.

Data from Indonesia’s COVID-19 taskforce showed that deaths now total 27,203, while confirmed cases reached 951,651, among the highest in Asia.

The record fatalities and sharp rise in daily cases in recent weeks comes amid warnings that the situation could imminently worsen in the country’s hospitals.

“Hospitals could collapse in the coming days if they’re not managed,” said Irma Hidayana, a co-founder of the data initiative group Lapor COVID-19.

Capacity of isolation beds at COVID-19 referral hospitals in Jakarta had reached 87 per cent and intensive care unit beds were 82 per cent occupied, data from the city government showed as of January 17. The high occupancy has seen some patients die after being turned away from hospitals.