Shocking moment worker at game farm grabs pheasant and slams it against a cage as campaigners blast conditions of Somerset hub where ‘2,000 chics died within seven weeks of hatching’

This is the shocking moment a game farm worker slams a pheasant’s head into a metal cage.

In the disturbing short clip the male worker is seen reaching into one of the cages, pulling out a bird before casually carrying out his disgusting attack as he chats to a colleague.

The footage, which was recorded by investigators on a visit to Bonson Wood Game Farm, near Bridgwater in Somerset, then shows the worker hitting its head again as it flaps its wings, desperate to get free.

Allegedly, this year many birds allegedly died prematurely at the farm and their bodies were tossed into wheelie bins like discarded rubbish. 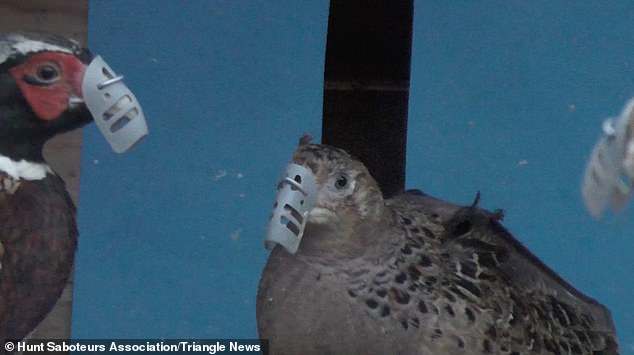 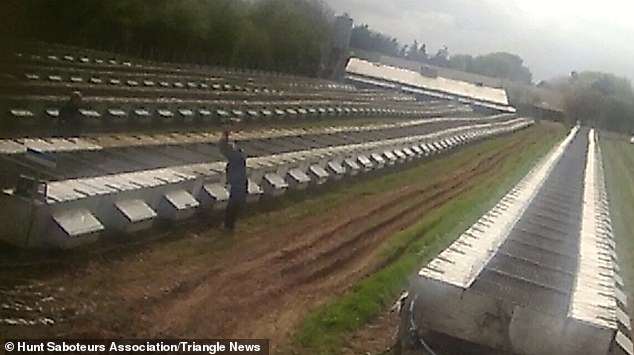 The investigators visited the farm on several occasions over the summer in order to probe working practices and the animals’ living conditions.

Pheasants at the farm – which breeds tens of thousands of game birds for shoots across the country – were found to be living in cramped conditions.

Footage shows thousands of pheasants crammed into hundreds of tiny cages that housed as many as eight birds and were encouraged to mate continually.

Females, unable to escape the attention of the lone male in their cage, have to wear ‘saddles’ as the repetitive mating rips the feathers from their backs, according to the Hunt Saboteurs’ Association, which obtained the film.

The animals are also fitted with plastic devices known as ‘bits’ on their beaks to prevent them from attacking each other out of frustration due to the close quarters living.

In one of the farm’s rearing sheds – which is said to house more than 21,000 pheasant chicks – nearly 2,000 of those allegedly died within seven weeks of hatching. 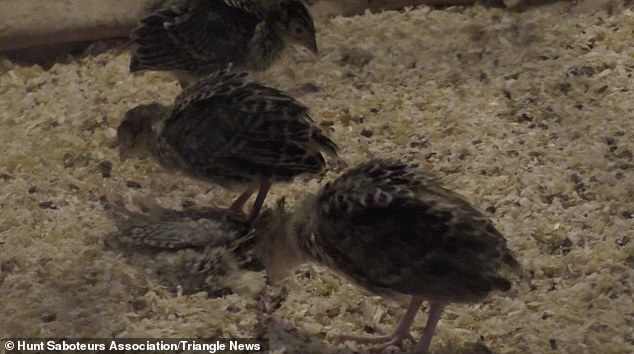 In another, 689 of the 16,400 pheasants housed there were said to have died within seven weeks.

Animal rights groups slammed the farm after seeing the footage.

Lee Moon, from the Hunt Saboteurs Association, which received the clandestine footage, said: ‘The shooting industry relies on factory farms such as Bonson Wood to supply the 50 million pheasants and partridges it releases to be shot each year.

‘The routine cruelty seen at Bonson Wood is the norm among game farms in the UK, and our previous exposé of Knowle Game Farm in Kent last year again highlights this.

‘Feather pecking, cannibalism and appallingly high mortality rates are the standard on pheasant farms, no matter how much the industry attempts to say otherwise.’

A People for the Ethical Treatment of Animals spokeswoman said: ‘This footage confirms that pheasant shooting should be stamped out.

‘The birds used and abused in these shoots are raised in such intensive confinement that they’re fitted with masks to stop them pecking each other to death from stress.

‘Then, they’re released so that some pathetic, unfeeling soul can blast them to death with a shotgun. Those birds who aren’t killed outright are often left to bleed slowly to death.

‘Hunting of any kind has no place in modern society and should have ended years ago – along with cockfighting, bear-baiting, and dogfighting.’

‘Any credible allegations made against a BGA member under those standards will be fully investigated under the proper protocols and dealt with accordingly.’

Bonson Wood was repeatedly contacted for comment and the allegations put to them, but they declined to comment.