Poignant 1913 signed photograph of Tsar Nicholas II’s teenage duchess daughters who went on to be brutally executed in the Russian Revolution is set to go up for auction for £45,000

A poignant signed photo of the four grand duchesses who were executed during the Russian Revolution has emerged for sale for £45,000.

Olga, Tatiana, Maria and Anastasia Romanov posed together around a table for the rare 1913 black and white image. 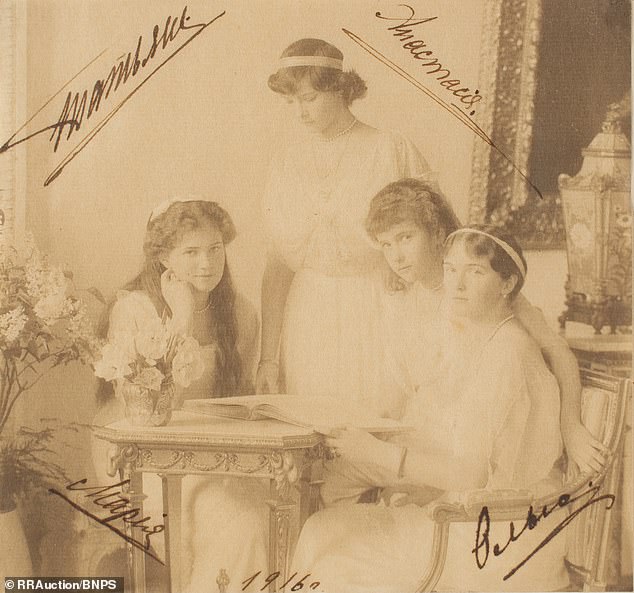 The photograph which was taken in 1913, featured Olga, Tatiana, Maria and Anastasia Romanov posed together around a table. It was signed by the four duchesses in 1916 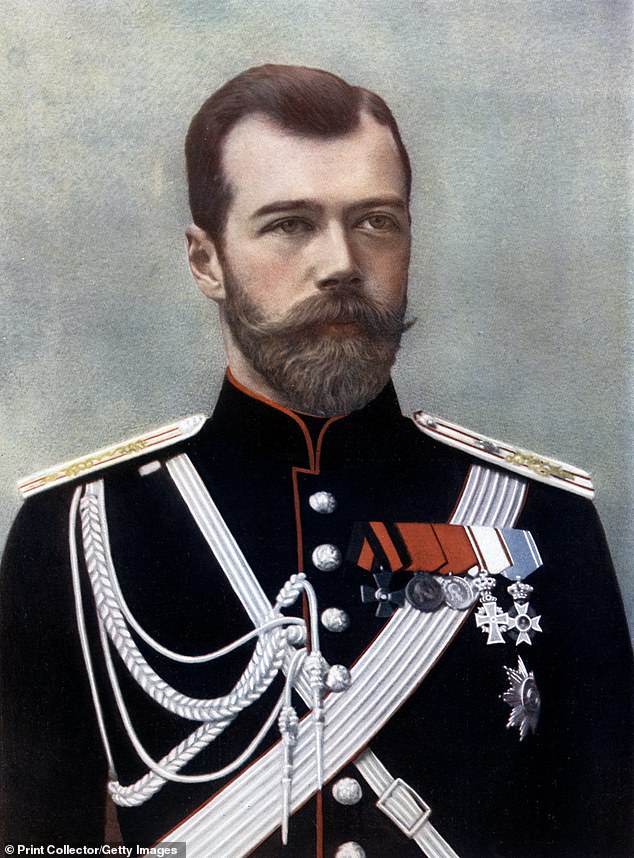 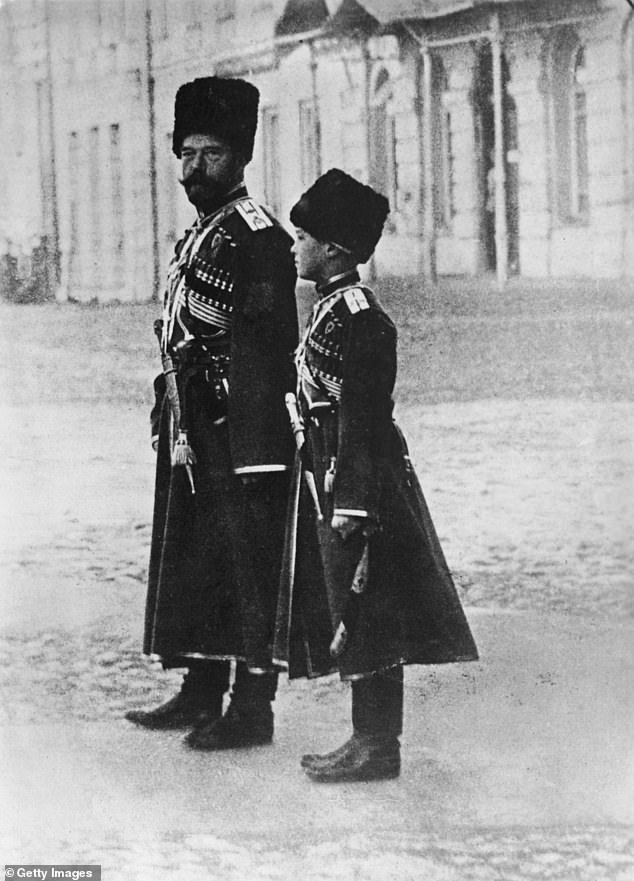 Tsar Nicholas, pictured with his son Alexei, was considered weak, especially concerning the relationship his family had with the mystic monk Rasputin 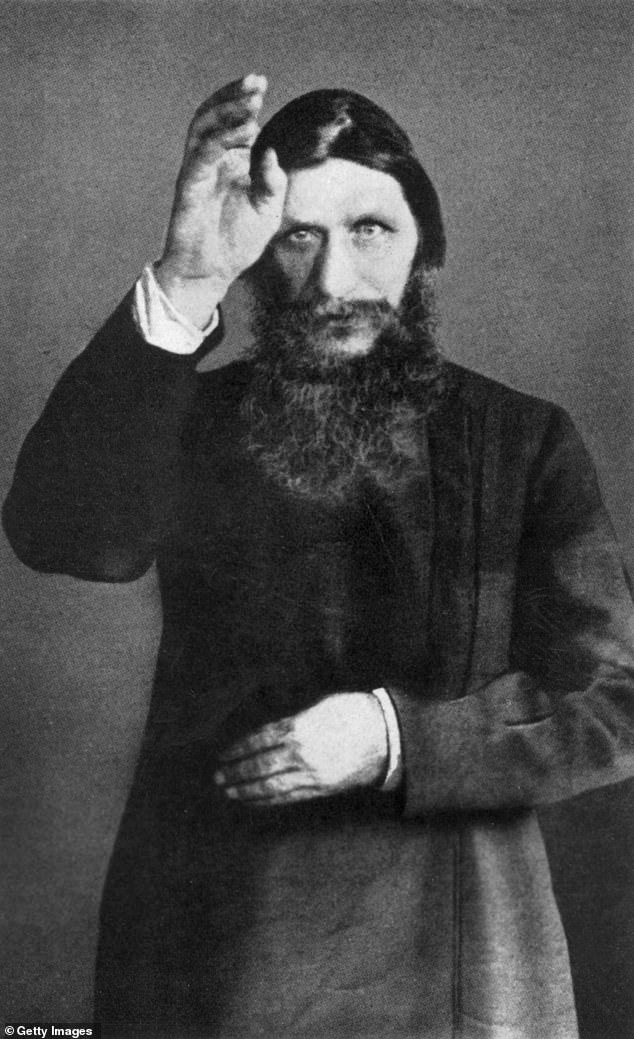 Nicholas II abdicated in March 1917 ahead of the founding of the Provisional Government which lasted eight months until it was overthrown by the Bolsheviks in the October revolution and the Russian Revolution.

The Romanov family were murdered in cold-blood by Bolshevik revolutionaries at Yekaterinburg on July 17, 1918.

Although accounts vary, they are believed to have been lured into a basement, then shot at point-blank range and bayoneted.

The sisters – the most famous princesses of their day – were aged between 17 and 22.

The black and white 6.75ins by 6.5ins portrait is going under the hammer with RR Auction, of Boston, US.

It has been consigned by a private collector.

An RR Auction spokesperson said: ‘Olga, Tatiana, Maria, and Anastasia Romanova, the daughters of Emperor Nicholas II of Russia and his consort, Alexandra Feodorovna, were the most famous princesses of their day.

‘Signed photographs are extremely rare, as they were all executed by Bolshevik revolutionaries at Yekaterinburg on July 17, 1918.

‘This is a magnificent signed photograph and a true rarity of Russian royalty.’

The timed sale ends on February 10.

Who was Tsar Nicholas II of Russia

Tsar Nicholas II was the last monarch of Russia.

He was related to Britain’s George V and Germany’s Kaiser Wilhelm II.

His reign coincided with the demise of the once great powers of the world, resulting in economic and military collapse.

Many Soviet historians portray Nicholas as a weak and incompetent leader whose decisions led to military defeats and the deaths of millions of his subjects.

In 1981, Nicholas, his wife, and their children were recognised as martyrs by the Russian Orthodox church. 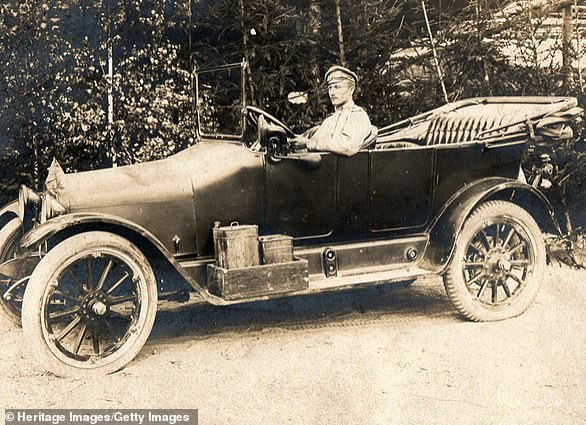 Nicholas II, pictured in his car, was forced to abdicate following the first revolution of 1917 when he was replaced by the Provisional Government

At the outbreak of the war in 1914, the Emperor of Russia, Nicholas II, sided with Britain and France against Austria-Hungary and Germany.

His strict rule made him an unpopular leader in Russia, but early military victories in the war boosted his popularity.

In 1917, Nicholas lost support of the army and these tensions led to the communist Russian Revolution in the same year.

Russia’s last tsar, his wife and five children were put to death by Bolshevik soldiers in the city of Yekaterinburg 18 months after Nicholas abdicated in the February 1917 revolution.

They had been moved from detention in St Petersburg and then in Siberia as the Russian Civil War raged.

The remains of Nicholas and his family were reburied in St Petersburg in 1998.