This is the heart-stopping moment two skiers got caught in a sudden avalanche.

Victor Casajuana and Arturo Sanz, both 20, were skiing off-piste in the mountains of Andorra, when they were soon battling for their lives.

Victor and Arturo were deciding what route to take when suddenly a big slab of snow began sliding down, catching the two skiers and dragging them downhill.

Arturo was hit by tree branches during the slide, but luckily the avalanche stopped a few moments after and both skiers found themselves uninjured during the incident which took place in January. 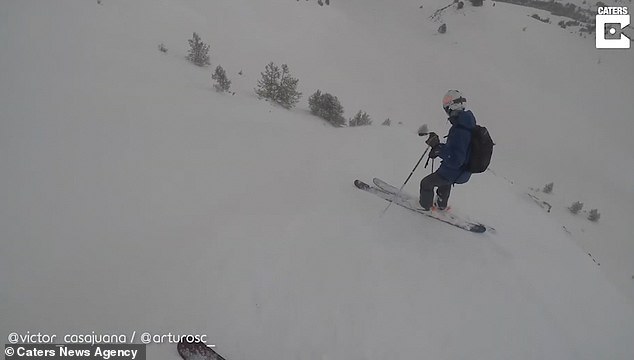 Victor Casajuana and Arturo Sanz, both 20, were skiing off-piste in the mountains of Andorra 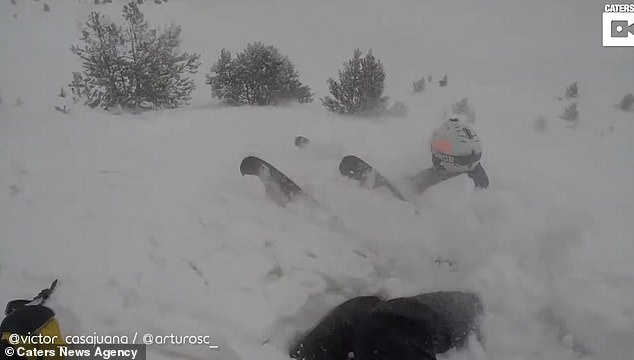 Without warning, a huge slab of ice and snow started slipping down the mountainside 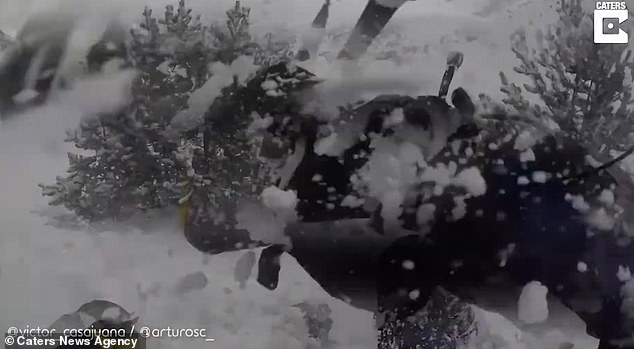 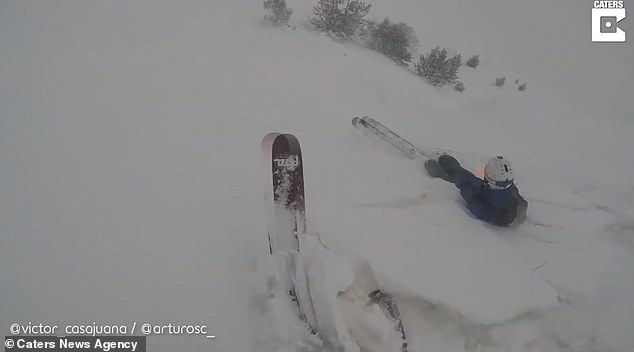 The Association of British Travel Agents (Abta) said skiers should regularly check avalanche danger ratings and weather conditions online or with their resort before they head out and while they are on the mountain.

There are some smartphone apps that display updated information.

An Abta spokesperson said: ‘Tens of thousands of British holidaymakers will be heading to the slopes in the next few months and yesterday’s tragic incident highlights the need to be aware of avalanche safety.

‘Abta urges skiers and snowboarders to ensure that it is consulted regularly as it can change from day to day.

‘Heavy snowfalls can create an unstable snow base and an environment for an avalanche. Following recent snowfalls, many European resorts are now displaying avalanche warnings.’ 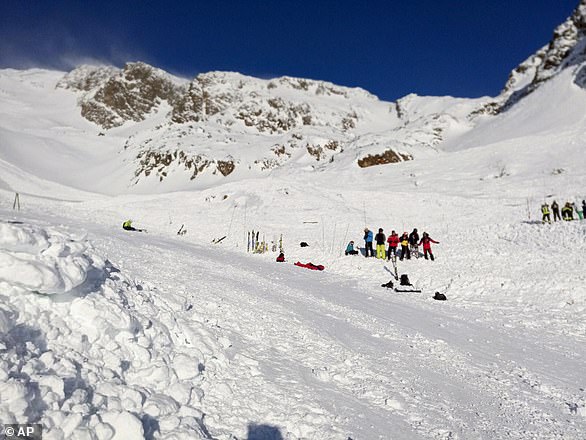 Every year several people are killed in avalanches in the Alps, pictured here are rescuers searching for a woman and two children who died in December 2019 in Val Senales

When they’re on the mountain, skiers should try to spot signs of previous avalanche activity and cracking or collapsing.

They should also listen for hollow noises when they are moving across the surface.

That’s a sign that the snow pack may be fracturing and is not solid enough to support a skier, said former SAS member and TV presenter Phil Campion in an interview with Adventure Travel Magazine.

If an avalanche occurs, a skier is in a struggle for their life. They can be buried or thrown into trees or rocks.

Experts said skiers should begin to ski sideways when an avalanche begins and do everything they can to remain on the surface of the slide.

That includes shedding their poles and using a ‘swimming’ technique in the direction of the slide or rolling like a log if they are knocked off their feet.

They can also try to grab onto a tree, although that can be impossible as the snow moves at a high speed.

In a situation where a skier is buried, they should immediately try to make some air space around their nose and mouth before the snow hardens around them and move their body to create some more space. 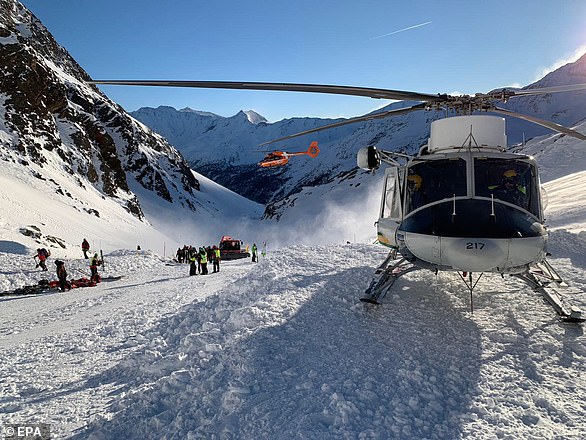 The Mountaineering Council of Scotland said people should keep one hand in front of their face to try to clear and maintain an air space, try to maintain space for chest expansion by taking and holding a deep breath, and try to remain calm and conserve energy.

The odds of survival are just 30 per cent for those who are completely buried, said the American Avalanche Association.

Skiers should carry equipment such as an avalanche transceiver or beacon, a shovel, probes and an airbag.

With the best-rated ones selling for about £200 in shops, a transceiver or beacon transmits the location of a person who has been buried in snow.

Today, some jackets or clothing contain technology that can help rescuers to locate a buried skier.

Collapsible probes look like tent poles and can be used to penetrate the snow to accurately find a trapped skier who has been located via a beacon.

Avalanche airbags are costly – selling for more than £500 – and inflate with the pull of a cord. They are designed to make the wearer larger so that they rise to the surface as snow slides down a mountain, although they do not guarantee survival.