Sky Views: You're not special – ditch the phone when you're behind the wheel

By Greg Milam, US correspondent

It is often said we judge others by their actions but judge ourselves by our intentions.

Nowhere is that more evident than when we’re in our cars. And nothing is more telling than when we use our phones when driving.

Have you ever done it? Of course you have.

Look around you on the roads – everyone is texting or emailing or fiddling with a device.

You see the telltale signs: cars drifting, slowing down then speeding up, drivers jabbing the brakes, looking down then up.

It is infuriating when we see this distraction, isn’t it? THEY are putting lives at risk, aren’t they?

But we’re much less judgy when WE do it. We believe WE’RE doing it safely, or that OUR messages just can’t wait.

The fact is that whether it is you, me, or them doing it, distracted driving is deadly.

We might think we’re some sort of superior being who has evolved to master the looking-at-phone to looking-at-road time ratio, but we’re not.

The stats don’t lie: the US Department of Transport says mobile phone use is a factor in 1.6 million car crashes every year, leading to half a million injuries and some 6,000 deaths. 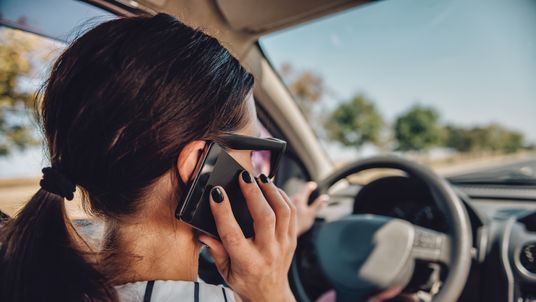 A quarter of all motor vehicle crashes involve the use of phones.

You can search online for the hundreds of heartbreaking stories of loss, caused by someone just not able to put the phone down.

I’m sure a lot of those drivers thought there was no way they would cause an accident. Until they did.

Yet an Australian study last year found that 68% of drivers “would need a lot of convincing” that texting while driving is dangerous.

The researchers found that “drivers are not good at identifying where it is safe to use their phone”. No kidding?

I was behind a car this week, the driver of which spent a good 15 minutes putting on their make-up using the rear-view mirror – never once dipping below 50mph.

They didn’t drift, didn’t slow down, and never appeared out of control – it was quite impressive in a weird way, a reminder of a time when applying make-up, shaving or fumbling for a CD or a sandwich was the height of distracted driving.

On the same journey I saw dozens of drivers using their phones, often with far less control of their car.

We need to learn the lesson: it is not just other people who cause accidents. Thinking that it is, is stupid and deadly.

Sky Views is a series of comment pieces by Sky News editors and correspondents, published every morning. Horrifying moment pet Labrador is dragged up by a descending lift Breathing or talking is ‘most common way to spread coronavirus’, scientists warn – The Sun
Celebrities Posts Ashton Kutcher Chokes Up While Educating ‘All Lives Matter’ Commenters Lea Michele Attempts To Apologize For Threatening To ‘S**t’ In Former Glee Co-Star’s
We and our partners use cookies on this site to improve our service, perform analytics, personalize advertising, measure advertising performance, and remember website preferences.Ok