Snow chance! Dreams of a white Christmas are dashed

Snow chance! Dreams of a white Christmas are dashed as Met Office predicts higher than average temperatures and plenty of RAIN in December

Forecasters have today dismissed claims Britain is expected to face the coldest winter in a century – and appear to have ruled out the chances of a white Christmas.

Met Office experts have revealed their long range predictions and suggest the UK will see a milder winter than usual.

Recent reports have suggested Britain could see ‘some type of 100-year cold or snow records being breached this winter.’

But according to the Met Office, temperatures across the UK in December could be above average for the time of year.

It suggests snow is looking unlikely on Christmas day, but the Met Office said the amount of snow experienced during December could not yet be determined. 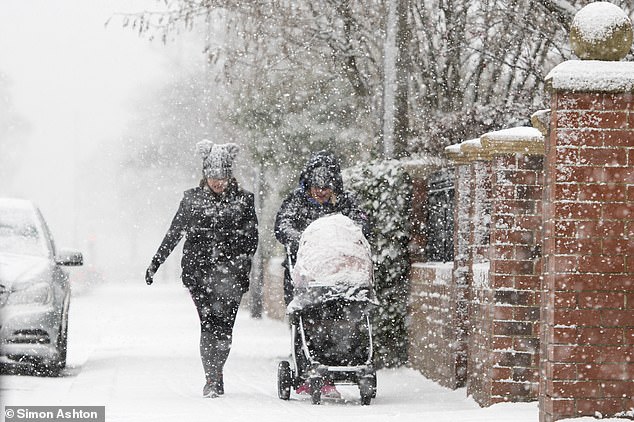 The Met Office has dismissed claims Britain is expected to face the coldest winter in a century. Pictured: Newcastle Upon Tyne in January this year when temperatures hit -11C overnight

Previously, the Met Office building in London used to be the location used to determine whether the UK had a white Christmas.

But as the number of people betting on it has increased so has the locations used.

The last widespread white Christmas in the UK was back in 2010. Some 83 per cent of stations recorded snow on the ground, the highest amount ever reported.

William Hill are offering odds of 6/1 that it will snow in London, and 5/1 in Manchester.

A spokesman for William Hill said: ‘At this stage of the year, the odds always suggest that a White Christmas is a long shot.’

A Met Office spokesman told ChronicleLive: ‘At the the moment, the longest range we are looking at is January, but this is not a forecast, it’s a probability.

‘We’re probably looking at milder than average conditions – so, not the coldest for 100 years, or a collapsed polar vortex.’

On its long range forecasts, the Met Office said the start of December will see heavy rain in the UK. There could be some snow in northern hills by December 5.

And then from December 6 to 20, more rain and strong winds are set to batter the UK.

The long range forecast reads for this period reads: ‘It is likely to begin on the cold side for most regions, with wintry showers at times in the north, and perhaps over high ground in the south.

‘Widespread frosts and ice are also likely. There looks to be a change around mid-month to milder conditions, although the timing is very uncertain.

‘This change looks likely to bring milder and wetter conditions across most parts of the UK, allowing temperatures to recover to around average, or perhaps slightly above.

‘The wettest conditions are likely to be in the north and west, with an increased likelihood of drier spells in the south and southeast. Colder interludes are still possible, mainly in the north.’