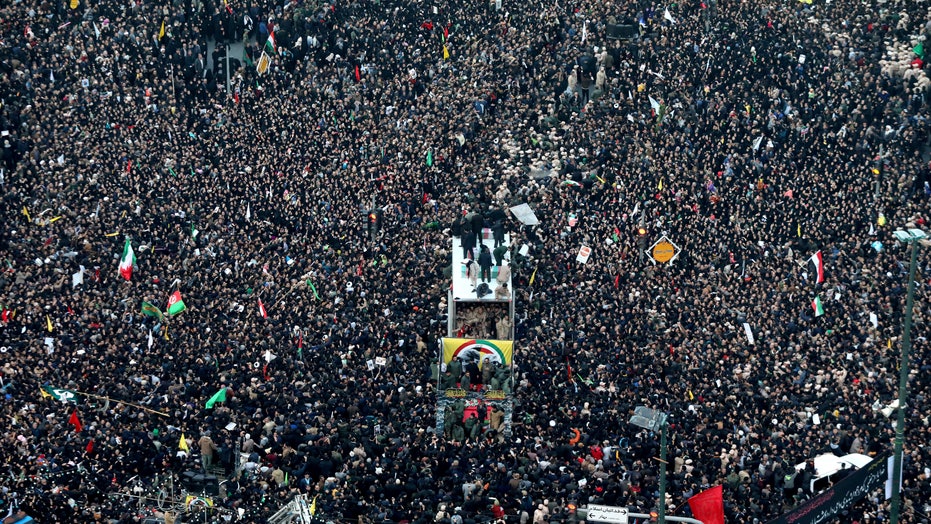 The daughter of slain Iranian Gen. Qassem Soleimani warned the families of U.S. soldiers deployed in the Middle East that they "will spend their days waiting for the death of their children" during the funeral Monday in Tehran.

While speaking to a vast crowd at Enqelab-e-Eslami (Islamic Revolution) square, Soleimani's daughter, Zeinab, directly threatened an attack on the U.S. military in the region, following an increase in tensions between Tehran and Washington.

"Families of the American soldiers in western Asia have witnessed America's humiliation in Syria, Iraq, Lebanon, Afghanistan, Yemen and Palestine wars, and will spend their days waiting for the death of their children," she said in Farsi, which was translated by the Associated Press. 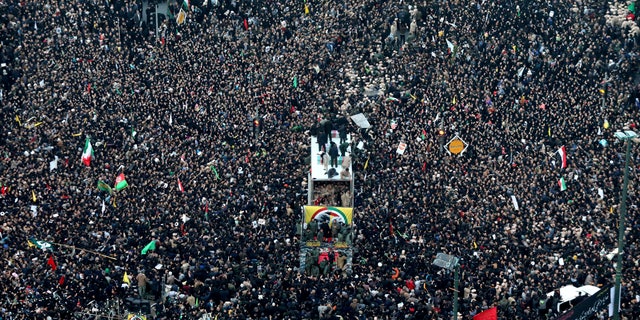 Coffins of Gen. Qassem Soleimani and others who were killed in Iraq by a U.S. drone strike, are carried on a truck surrounded by mourners during a funeral procession, in the city of Mashhad, Iran, Sunday, Jan. 5, 2020. (Mohammad Hossein Thaghi/Tasnim News Agency via AP)

During the funeral, Iran's Supreme Leader Ayatollah Ali Khamenei — who had a close relationship with Soleimani — wept and prayed over his casket and the caskets of others killed during traditional Muslim prayers for the dead.

Esmail Ghaani, the general replacing Soleimani reportedly stood near Khamenei during the funeral. Iranian President Hassan Rouhbaani and other top leaders within the Islamic Republic were also in attendance. 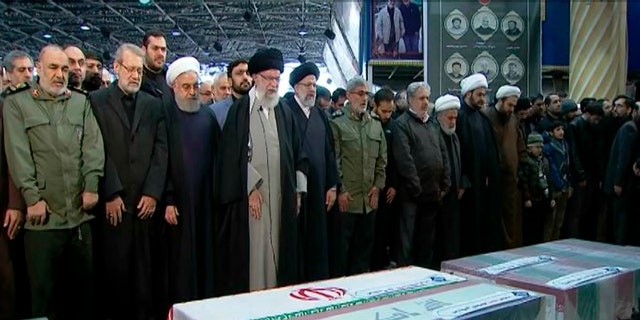 Ayatollah Ali Khamenei, fourth from left, leads a prayer over the coffins of Gen. Qassem Soleimani and others who were killed in Iraq in a U.S. drone strike on Friday. (Office of the Iranian Supreme Leader via AP)

Demonstrators unfurled red Shiite flags, which traditionally symbolize both the spilled blood of someone unjustly killed and a call for vengeance. 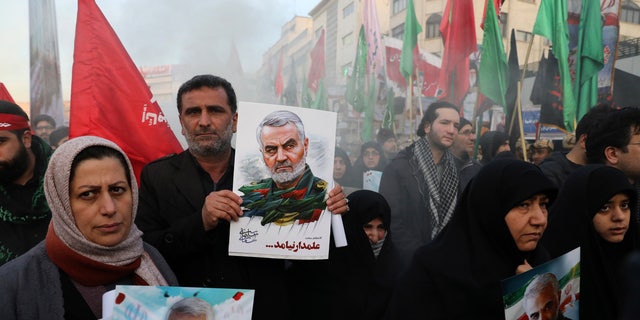 Mourners holding posters of Iranian Gen. Qassem Soleimani attend a funeral ceremony for him and his comrades, who were killed in Iraq in a U.S. drone strike on Friday, at the Enqelab-e-Eslami (Islamic Revolution) Square in Tehran, Iran, Monday, Jan. 6, 2020. (AP Photo/Ebrahim Noroozi)

The processions mark the first time Iran honored a single man with a multi-city ceremony. Not even Ayatollah Ruhollah Khomeini, who founded the Islamic Republic, received such a processional with his death in 1989. Soleimani on Monday will lie in state at Tehran’s famed Musalla mosque as the revolutionary leader did before him.

Soleimani will be buried in his hometown of Kerman.

The Associated Press contributed to the report