A sorry saga that started when Solomon Lew attempted to purchase the Thai villa where he proposed to his wife really has developed into the James Joyce’s Ulysses of international property squabbles. 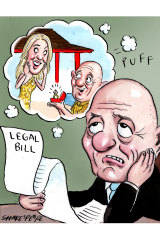 Readers will recall the legal action kicked off in 2017 over a villa in Phuket after Lew verbally agreed to buy the property, only to find out weeks later it had been sold to a higher bidder — Hong Kong businessman Christian Larpin.

In February, a Singaporean judge sided with Larpin, ruling that Lew had a reasonable expectation to believe he had bought the villa, but the broker who struck the deal didn’t have the authority to sell it.

Critically, the judge also ruled that Lew should pay the defendants’ costs — a fair whack considering there are five defendants including Larpin, his investment vehicle, and the original villa owners, Credit Suisse director Kai Nargolwala and his wife, Aparna.

Now Lew is haggling over costs.

In a submission filed to Singapore’s court of appeal last month, Lew offers the Nargolwalas $100,000 plus an additional $10,000 for an aspect of the case that was heard in a Thai court — largely in line with what the family requested.

Larpin’s costs are more of a sticking point. He estimates he’s racked up $250,000 in fees on the case, but Lew isn’t copping it, arguing Larpin’s costs are “startlingly wholly disproportionate” given the “limited role” his lawyers played in the case.

“Further, it is almost three times the estimated sum set out by the Nargolwalas in their costs schedule despite their involvement being a fraction of the Nargolwalas.”

Lew offers Larpin a maximum of $25,000. That should go down well. The case continues.

But there is more Lew news.

This column noted hiring the straight-laced Murray could be a culture clash for Lew given the prominent role Murray plays in Liberal Party circles, as well as his position inside the Australian Retailers Association — the peak body which Premier has steadfastly refused to join.

And we pointed out their differing stances on the JobKeeper subsidy might be an issue.

Under Murray, JB Hi-Fi refused to pocket the cash. Meanwhile, Premier trousered $65 million in the past financial year from JobKeeper plus another $15 million in the January half. And what’s more, it emphatically resisted calls to hand it back.

Until Monday morning, that is, when Premier announced plans to return $15.7 million to the tax office in an Olympic grade backflip.

A sign of Murray’s new regime, perhaps? A Premier spokesman noted the executive wouldn’t officially start until October. But it sure is good to see the team wasting no time getting with the program.

Book of the bar

Like those two cowboys in the Brokeback Mountain, try as we might, this column just can’t quit the Victorian Bar.

We thought the controversies of 2020 — when conservatives battled progressives over the bar’s direction and spending — had been laid to rest. We don’t propose to revisit all the fights in detail as The Age newspaper only runs to 40-odd pages. 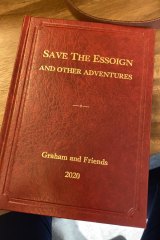 The feisty emails exchanges have been collected into a leather-bound volume.Credit:

Suffice to say, a bunch of lockdown-afflicted barristers with too much time and too little income on their hands waged war against the bar’s governing council over modernisation and spending initiatives previously agreed to during better times.

But now the feisty emails exchanges during that year have been collected into a leather-bound volume on a highly limited release titled Save the Essoign and Other Adventures by Graham and Friends.

Yes, we don’t know why a USB stick wasn’t sufficient either.

There is also the scorching 2000-word August 17 missive titled “The Victorian Bar’s response to COVID-19 restrictions”, by young legal power couple Nawaar Hassan and Dimitri Ternovski, who took umbrage at the bar council’s response to the COVID-19 issues affecting members who needed childcare. “What we received [from the council] was tips about online yoga sessions and virtue-signalling platitudes about the work of teachers and shelf stackers.”

Robertson was so put out by proposed changes to the bar’s education program last year that he settled upon a World War II Darkest Hour analogy.

“At this time, the immortal words of Leo Amery to Neville Chamberlain in 1940 are especially apt,” Robertson wrote. “You have sat too long for any good you have been doing lately. Depart, I say, and let us have done with you. In the name of God, go!” A colourful read, to be sure.

A day for the Plus Ones

Budget 2021 isn’t the only high-stakes political event taking place on May 11. The Parliamentary Partners Association, which is also known as the official support group for parliamentary plus ones, has picked the date for its annual general meeting and vote on office bearers. Better not tell Josh Frydenberg.

PPA convenor Catherine McCormack — the wife of Deputy Prime Minister Michael McCormack — has issued the group’s schedule for budget week. The AGM will take place on Tuesday, followed by lunch. Wednesday is more relaxed — and more social — with invitations extended to the spouses and partners of diplomats.

“Given a lot of partners attend Canberra during budget week, we have also arranged a tour of Parliament House,” Catherine McCormack says.“This is a wonderful opportunity to connect with the partners of the various diplomats representing their countries in Australia … It would be greatly appreciated that if you are in Canberra you try to make this gathering.” Sounds just lovely.

Our Morning Edition newsletter is a curated guide to the most important and interesting stories, analysis and insights. Get it delivered to your inbox.