The mother of teenage actor Archie Lyndhurst has said the CBBC star died from a brain haemorrhage while he slept at his family home in west London.

An inquest into the 19-year-old’s ‘unexplained’ death on September 22 had been abandoned months after the star passed away following a ‘short illness’.

The teenager, who had been acting since the age of 11 and was son of Only Fools and Horses star Nicholas Lyndhurst, starred in the hit CBBC show So Awkward as Ollie Coulton and was dating co-star Nethra Tilakumara.

His devastated mother Lucy Lyndhurst has now revealed that Archie had died in his sleep after an intracerebral haemorrhage caused by acute lymphoblastic lymphoma/leukaemia – an incredibly rare condition which kills just 800 people a year.

Lucy and her husband Nicholas Lyndhurst, 59, found out the ‘harrowing’ details from his second post mortem just four days before Christmas. 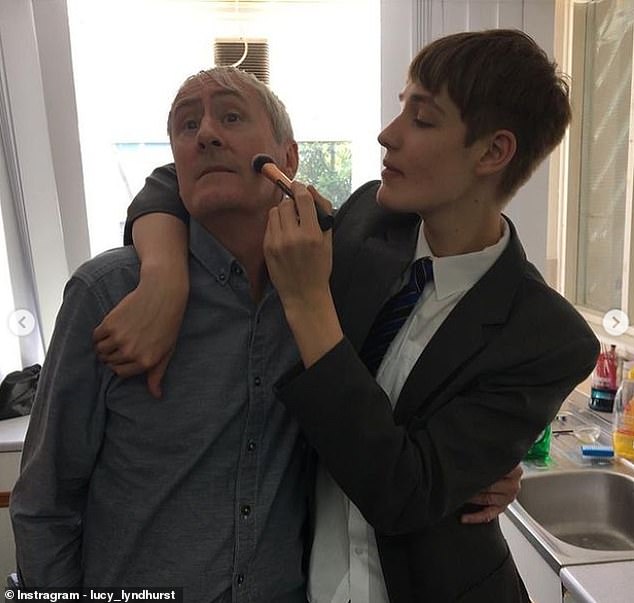 ‘Darling, magical boy’: Sharing nine photos of Archie with his parents, Lucy said the family were still awaiting answers as to why he died (Nicholas Lyndhurst with Archie) 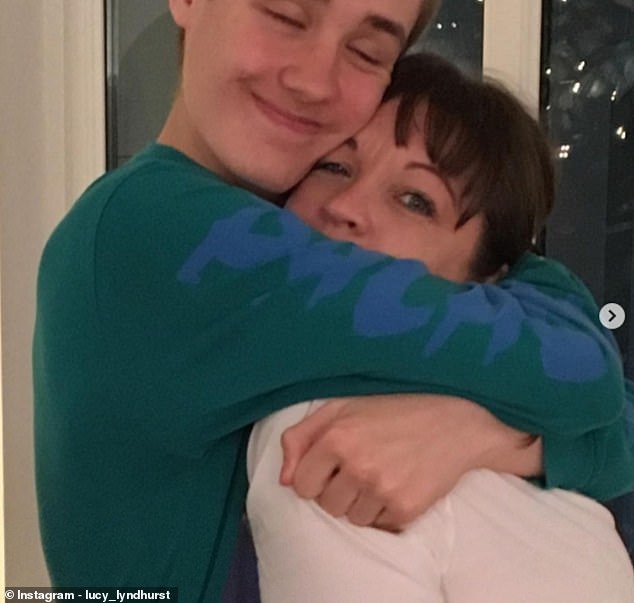 Lucy told her followers that ‘the pain of our loss is beyond anything we have ever felt before, and wouldn’t wish upon anyone’ 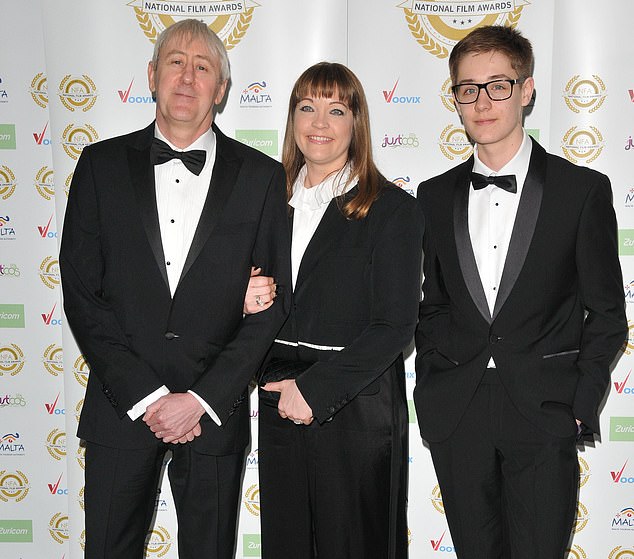 Archie, who was the beloved son of Only Fools and Horses star Nicholas Lyndhurst and his wife Lucy Smith, starred in the hit CBBC show So Awkward as Ollie Coulton 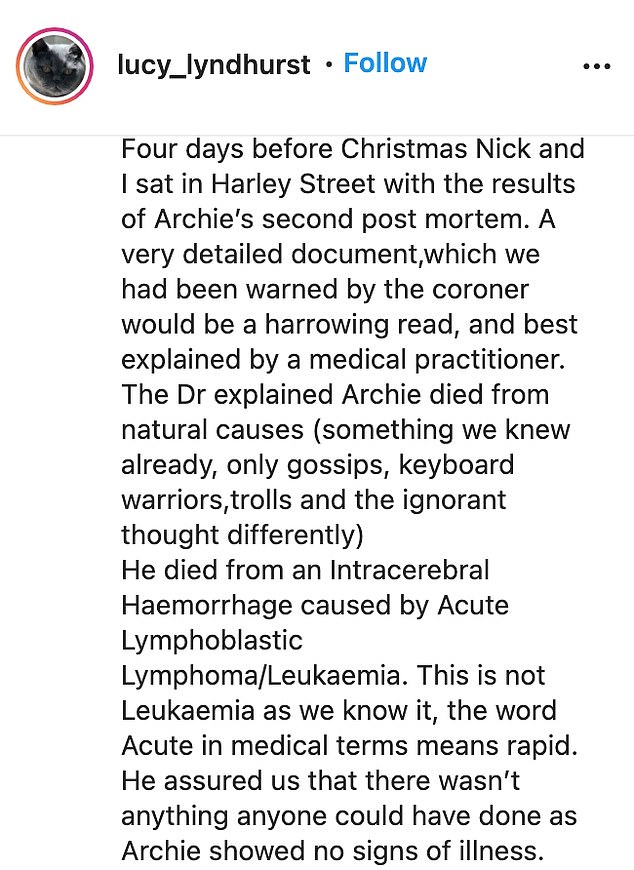 Posting on Instagram, she wrote: ‘He died from an Intracerebral Haemorrhage caused by Acute Lymphoblastic Lymphoma/Leukaemia.

‘This is not Leukaemia as we know it, the word Acute in medical terms means rapid. He assured us that there wasn’t anything anyone could have done as Archie showed no signs of illness.

‘Archie had numerous bleeds on the brain and the Dr went to great lengths to reassure us that he wouldn’t have been in any pain as it happened in his sleep.’

Lucy also shared pictures of Archie as a young child and pictures of him with Nethra, who she called ‘the love of his life’.

Paying tribute to her only son, she said: ‘The world is a very different place without him. One of my last conversations with him was about all that was going on in the world, the chaos, anger about all different subjects.

‘He looked at me with his huge blue soulful eyes, shook his head and said ‘All the world need is love Mama, it’s so easy to love’.

‘He loved life, he valued everyone in it and every moment he was given. He was always singing, and had such energy and passion in everything he did.

‘To be part of his life has been the biggest joy mad honour. We miss him everyday and always will.’

The teenager starred in So Awkward as Ollie Coulton and also appeared as a young Jack Whitehall in the BBC’s Bad Education in 2014. 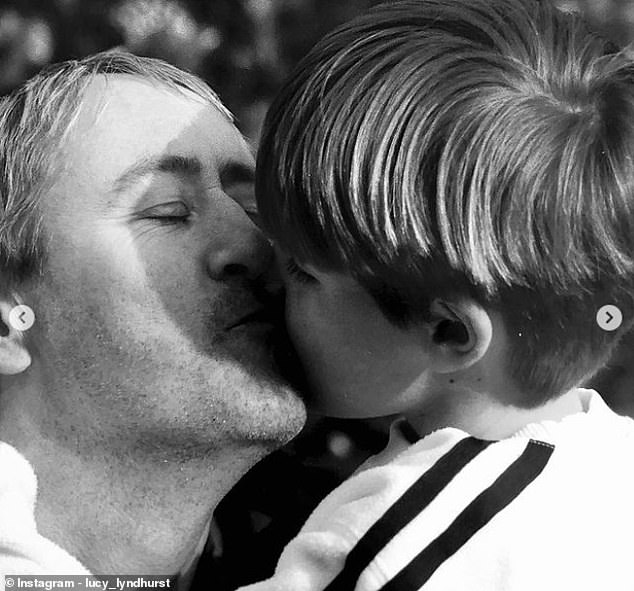 Heartbreak: Sharing a photo of actor Nicholas kissing Archie as a young boy, Lucy said: ‘We will love you forever and ever’ 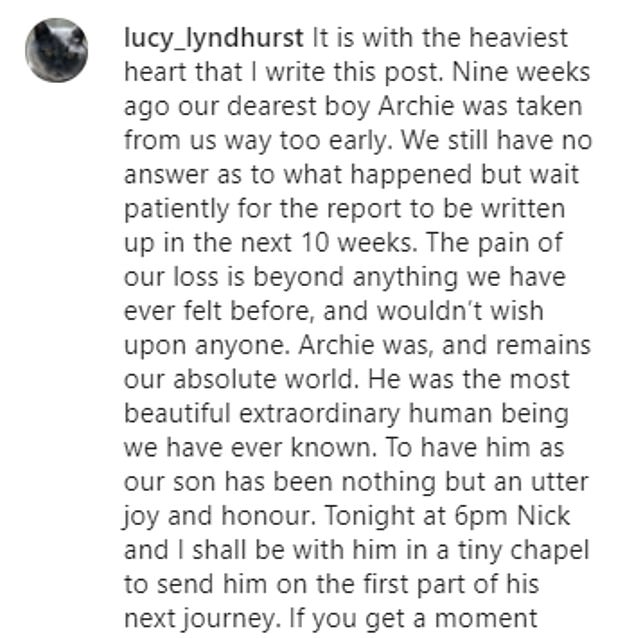 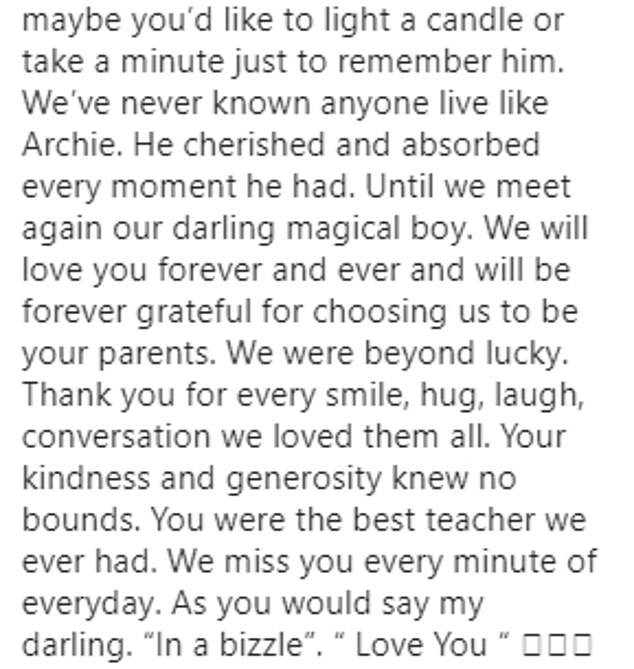 Lucy Lyndhurst said her son ‘was and remains our absolute world’ in the heartbreaking social media post. She added the couple would miss their son ‘every day’ 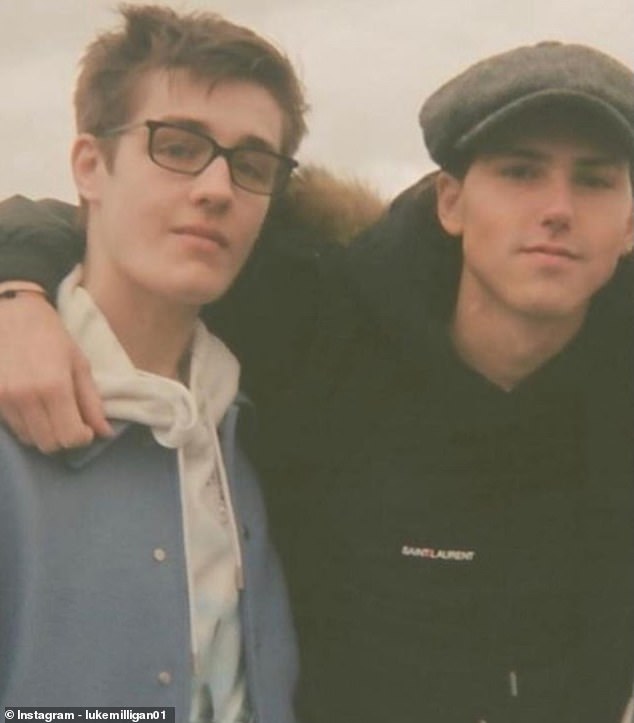 Police were called ‘to a report of a concern for welfare’ on September 22 and the young actor was declared dead at the scene. His death is being treated as ‘unexplained but not suspicious’.

Sharing nine images of her late son on social media, Lucy told her followers: ‘The pain of our loss is beyond anything we have ever felt before, and wouldn’t wish upon anyone.’

Inquests: What are they and why are they held?

An inquest is an inquiry into the circumstances surrounding a death where the cause is still unknown, or if the person died a violent or unnatural death, or in prison or police custody.

The purpose of the hearing is to find out who the deceased person was and how, when and where they died.

Coroners can reach one of a set list of conclusions, or return a ‘narrative conclusion’ if none of the categories are appropriate. Among the mots common conclusions are:

Some inquests require a jury, for instance after an unnatural death in custody or in relation to health and safety at work.

Deaths due to natural causes and most illnesses do not require an inquest to be held.

She added: ‘We’ve never known anyone live like Archie. He cherished and absorbed every moment he had.

‘Until we meet again our darling magical boy. We will love you forever and ever and will be forever grateful for choosing us to be your parents. We were beyond lucky.’

‘Will miss you forever buddy! Until we meet again, go flyyyy high my man! Goodnight and Goodbye for now!’

Archie’s girlfriend, actress Nethra Tilakumara, who starred alongside Archie in the CBBC show So Awkward, hasn’t yet commented on his funeral but described the teenager as a ‘beautiful soul’ at the time of his death, writing: ‘Every day with you was the best day ever.’

She shared the poignant tribute to her Instagram, alongside a photograph of her late boyfriend taking pictures with a Polaroid camera.

Ms Tilakumara wrote: ‘There was once a boy named Archie Lyndhurst and he made me the happiest girl in the whole wide world.

‘A boy in a white beanie with his skateboard, swaggered through two wooden doors with an unimaginable lust for life down the hallway of Sylvia Young Theatre School.

‘He sat across from me while my head was buried in a script, trying to book a job.

‘Blissfully unaware, I had no idea my future was sitting right in front of me.’

She added: ‘Boyfriend doesn’t do it justice. Archie you were my Person and Best friend all in one.

‘To spend the rest of my life laughing and going on adventures with you, was just it for me.

‘Everything made sense with you. You made me laugh like no one else and you loved me in such a way that I will forever just be grateful for.

‘Being loved by you was a bonus, but I can proudly say you are the most incredible person that I have ever met and had the pleasure of being in love with.’ 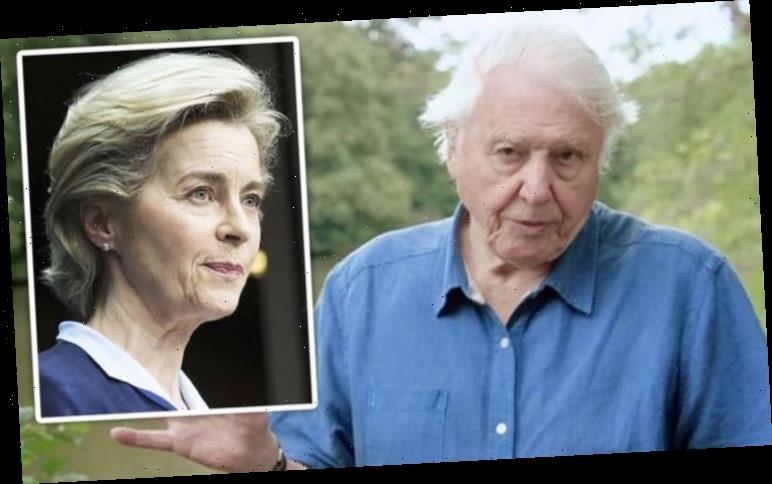