Southwestern temperatures could push to 115+ degrees while Northeast cools down

Southwestern states are in for more sweltering heat through next week, with temperatures rising to more than 115 degrees Fahrenheit.

Arizona, which has seen an active wildfire season already, is under an excessive heat warning from the National Weather Service.

The elderly, children and pets are at risk, with the agency advising people to stay hydrated and reduce outdoor activities.

In California’s Death Valley, temperatures are likely to top 120 degrees by Wednesday, and many other areas will see “dangerously hot conditions” with temperatures of more than 115 degrees.

The Pacific Northwest is the exception, seeing rain and temperatures in the 60s as a couple of cold fronts move through the region.

The West has been impacted by a heat wave over the last couple of weeks and Southern and Gulf Coast states have been under a constant barrage of flooding, hail and tornadoes.

California and other inland states – fighting wildfires as well as an historic drought — are also expected to see temperatures climb once again, but meteorologists say the East is in for cooler weather. 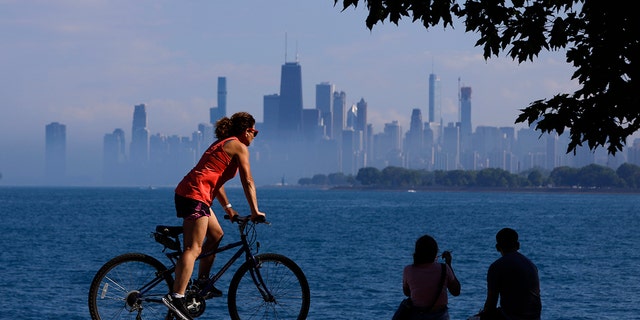 People spend time as they take advantage of warm summer weather along Lake Michigan, Wednesday, June 9, 2021 in Montrose Beach in Chicago. The beaches in Chicago have reopened since closing over a year ago because of the coronavirus pandemic. (AP Photo/Shafkat Anowar)

With severe storms continuing to slam the South and the Southeast, AccuWeather reported Saturday that the Northeast will feel a chill that lasts into next week.

The shift will cause below-average temperatures in most places, according to the weather tracking service.