A Spanish city councillor has offered his resignation after he inadvertently filmed himself naked during an online meeting that was broadcast on live TV.

Bernardo Bustillo, who worked as a part-time councillor for the Torrelavega community in Cantabria, northern Spain decided to take a shower during the middle of a meeting but did not realise his camera was still on.

Mr Bustillo was initially showering behind a translucent screen, meaning his private parts could not be seen by his eight colleagues in the call. 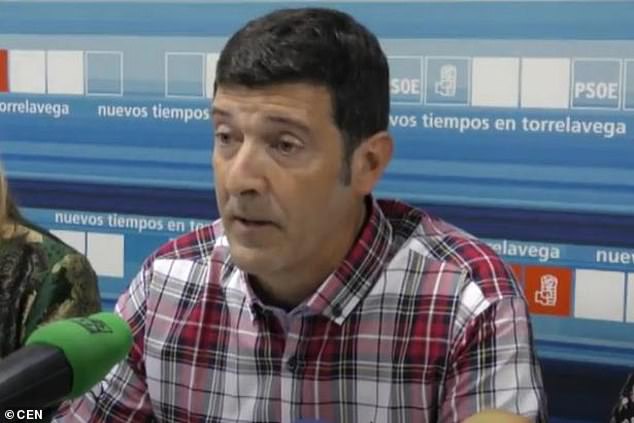 Bernardo Bustillo, a Spanish city councillor from Cantabria, landed himself in hot water after accidentally filming himself naked during a Zoom meeting with eight other colleagues

However, during a speech by Pedro Perez Noriega, the councillor for Economics and Treasury, Mr Bustillo came out of the shower with no clothes on and quickly realised his error before moving back into the bathroom.

And according to Spanish news outlet 20 Minutos, the meeting was being shown live on Cantabrian television and the incident was witnessed by several local residents.

A recording of the meeting also shows Mr Bustillo’s colleagues shock seeing the councillor’s naked body and one colleague can be heard saying: ‘Tell Berni something, please. Can we log him off?’

Mr Bustillo, who also worked as a swimming coach alongside  his work for the council, announced in a press statement he would be stepping down from his role as Councillor for European Affairs and Citizens Participation, but said he was proud of his body.

He said: ‘I was aware of what was happening when I heard my name being said but many colleagues called me on the mobile trying to notify me, but I left the phone in my room.

‘Because of my job [as a swimming teacher] I have spent half of my life half-naked and I have never felt ashamed of other people’s nudity and even less of my own.’

Mr Bustillo (bottom left) decided to take a shower during the meeting as he was in a rush to be elsewhere, but did not realise he failed to switch his camera off. He then came out of the shower to reveal his naked body and has since offered his resignation from the council

The councillor believed he had switched his camera off but had only minimised the call screen on his computer.

He explained that he had to take a shower as he was in a rush to take his daughter to a school activity.

It is not known whether the local socialist party PSOE, who Mr Bustillo represents, has asked him to stand down.