Spanish police arrest two men over killing of British pensioner, 70, who died during violent robbery at her Costa Blanca home

Spanish police have arrested two men on suspicion of killing a British pensioner in the Costa Blanca.

The pair, a 49-year-old Dutchman and a 33-year-old Spaniard, were held after a lengthy investigation by the Civil Guard into the 70-year-old’s death during a violent robbery at her home south of Alicante.

Police say one of the men was a friend of the victim and she let him in before they stole cash he knew she kept in the house.

She received a fatal blow to the chest as they fled the crime scene. 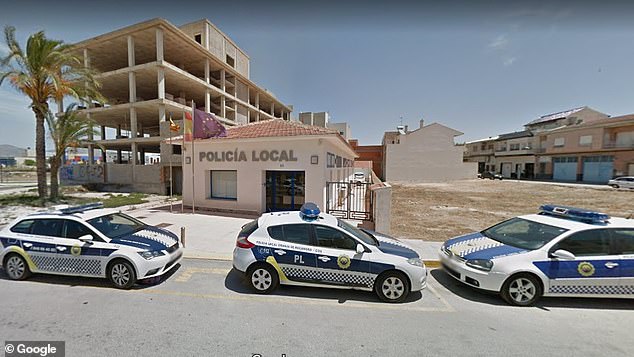 Two men were arrested after a 70-year-old British pensioner died in Granja de Rocamora (file image, a nearby police station)

The homicide happened on November 18, 2019 in Granja de Rocamora in the Vega Baja del Segura region south of Alicante.

Both suspects are being held in prison on suspicion of homicide and robbery with violence.

A spokesman for the Civil Guard said: ‘Homicide squad officers in Alicante have resolved the death of a British woman aged 70 whose body was found on November 18 last year at her home in Granja de Rocamora where she lived alone.

‘It was a female friend who alerted police after discovering her body on the floor with apparent signs of violence.

‘There were no clues at the scene of the crime that helped officers.

‘The only certainty was that she opened her door voluntarily because there was no forced entry.

‘After months of analysis the theory that the victim knew her alleged killer gained ground.

‘The alleged motive could not be established until the arrests took place.’

The spokesman added: ‘One of the detainees is a 49-year-old from Holland and the other a 33-year-old Spaniard.

‘The police investigation has revealed both went to the property to rob her and one, a friend of the victim, knew she would open the door to him,.

‘Knowing she kept money at the property, they took 600 euros. As they fled, apparently to knock her out of the way, one of them delivered a fatal blow to her chest which ended her life.’

A date for their trial has not yet been set.