Speaker Hoyle says MPs' babies SHOULD be allowed in the Commons

Commons Speaker Sir Lindsay Hoyle has given his blessing to MPs who are new parents bring their babies into the chamber during debates, after a row involving Labour MP Stella Creasy.

Sir Lindsay said it should be up to the discretion of the person in the speaker’s chair at the time – either he or one of his deputies – to make a call based on whether the infant is disrupting proceedings.

A row was sparked in November when Ms Creasy was censured for carrying her son Pip, then aged three months, while speaking in a debate.

She pointed out she has previously been allowed to speak in debates with him in a sling, with authorities taking a relaxed view.

While she can take maternity time off with full pay she argues the current Commons rules do not allow her constituents to be fully represented while she is off, and has continued to work.

Sir Lindsay, who has asked the cross-party Procedure Committee to examine the rules and whether changes were needed, told the Telegraph today his view was that the ‘chair on the day has got to make a decision’.

Referencing Ms Creasy’s son, he said: ‘I saw that baby come into the Chamber when I was in the chair. And did it affect the debate? No. Was it a quiet and peaceful baby? Absolutely. Did it disrupt? Not in the slightest. So did it matter to me? Absolutely not. 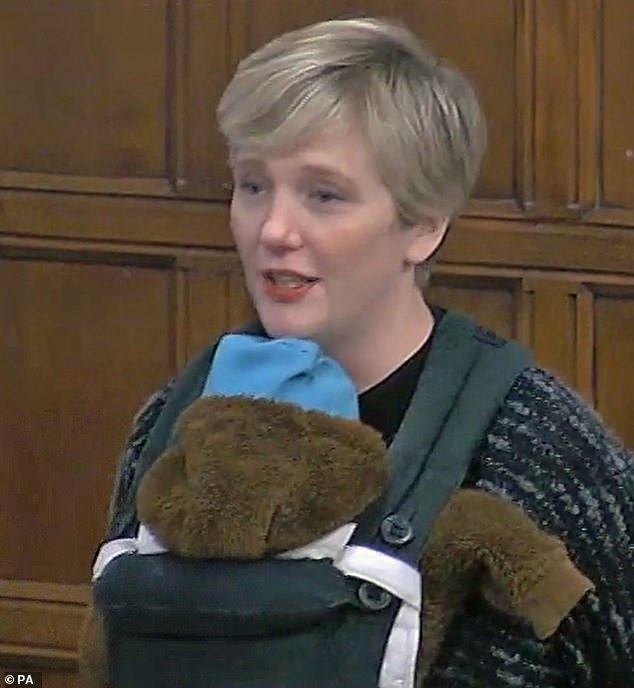 The Walthamstow MP was told she can no longer have her three-month-old son Pip with her, despite it being allowed in the past (pictured) 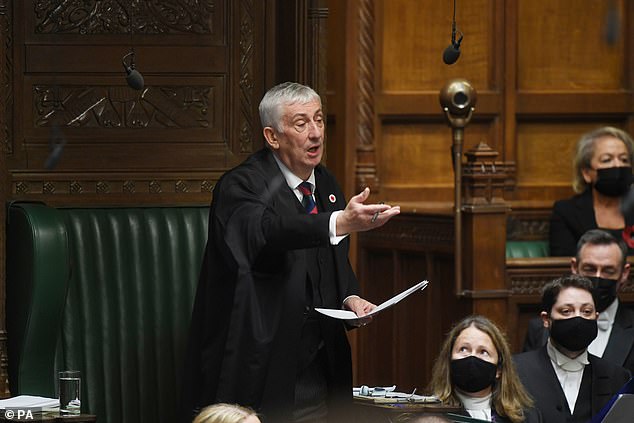 Sir Lindsay Hoyle previously said he has been ‘heavily lobbied’ not to change the regulations amid a row over a ban handed to Labour backbencher Stella Creasy this week.

All MPs have to follow the Rules of Behaviour and Courtesies in the House of Commons, which was most recently updated in September.

‘For safety reasons, you are asked to carry your child and not to bring pushchairs through the lobby.

‘You should not take your seat in the Chamber when accompanied by your child, nor stand at either end of the Chamber, between divisions.’

However, Ms Creasy and other new mothers in Parliament have previously carried their newborn children – who are often still breastfeeding – into the Commons for debates, with authorities taking a sympathetic stance until now.

The situation is further complicated because of the rules covering maternity leave. MPs can take time off on full pay.  But they have argued that this means they are unable to take part in votes and debates when they should be representing constituents.

Earlier this year the Government changed legislation to ensure Cabinet ministers received six months maternity leave, to allow the Attorney General, Suella Braverman, to keep her post after having a baby. But backbench MPs have not been afforded access to the same arrangement.

In 2019, the Labour MP for Walthamstow took part in a pilot programme which meant when she was pregnant with her first child, she was replaced by a locum who covered the role while she was on leave.

The post came with £50,000 pro rata salary and covered a period of seven months absence.

They were able to meet ministers and handle casework, but could not vote or speak in the Commons.

But this summer Ms Creasy was told by Parliamentary authorities that she could not appoint a locum MP to cover her second child.

Instead she was was offered £35,000 to hire a new junior staff member or promote an existing member of her team.

‘What I would say, and I’ll be quite honest with you, is each chair will make a decision.

‘It is now for others to decide, that’s why the committee is reviewing it. And I will then have to respect (that decision).’

The case polarised opinion with some MPs saying the rules should be eased for mothers with very young children, and Downing Street indicating it was sympathetic to her case.

But other have accused her of ‘grandstanding’, while a YouGov poll found the majority of Britons believe MPs should not be allowed to take babies into the chamber.

Ms Creasy, a mother of two, welcomed the review after she was emailed by authorities about rules prohibiting bringing children to debates after bringing Pip into a Westminster Hall debate.

The Walthamstow MP Ms Creasy said she hopes the move ‘means some of these rules will be reviewed to make parenting and politics possible to mix’.

Pip, who is breastfeeding, has regularly attended the Commons, as did Ms Creasy’s older daughter.

Asked on Twitter she could not just leave Pip at the parliamentary nursery – which is ranked Good by Ofsted and caters for children from birth to aged five, she replied: ‘There is not a free creche, I pay for it and it’s great and I use it for my older child, but this one is just 13 weeks old and needs to feed so not practical.

‘Without maternity cover to make sure Walthamstow gets heard, baby needs to come with me for now.’

She has previously taken part in debates in the Commons chamber while carrying one of her two children, and following the 2019 election was sworn in while carrying daughter Hettie.

Ms Creasy was criticised by Red Wall Tory MP Scott Benton last month, who questioned why she needed to bring her son to work.

‘Parents who get paid a fraction of what you do pay for childcare and juggle responsibilities so they can go to work,’ the Blackpool South MP said.

‘What makes you so special?’

Ms Creasy later hit back, saying: ‘We don’t have employment rights so don’t have maternity cover to be able to do juggling, hence needing to take baby with me.

‘But great to hear your support for ensuring mothers can be part of politics. Guess being anti choice for women is just in your DNA.’

And the issue divided users on Mumsnet, with some suggesting they would not take a baby into their own business meetings, while others said Ms Creasy was ‘highlighting an important point’.

A YouGov poll found the majority of Britons disagree with Ms Creasy, with 49% believing MPs should not be allowed to bring babies into the chamber versus 35% who who say they should