Students, migrants and grey nomads will be urged to pick fruit and vegetables and fill labour shortages on Victorian farms to prevent tonnes of produce from going to waste and price rises for fresh food.

Attracting enough workers, particularly foreign labourers, to pick and pack produce has been a major problem for some farmers as the coronavirus pandemic has all but stopped international travel. 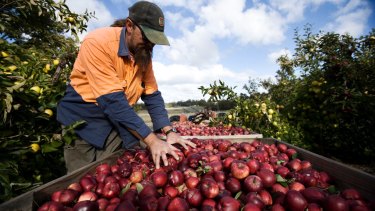 The Victorian government will launch an advertising campaign this week to encourage thousands of workers to spend the summer months labouring on farms.

The television, print and radio campaign will target school leavers, international students, migrant communities and "grey nomads" aged 60-plus. The campaign material will be translated into various languages, including Vietnamese and Mandarin.

The government said there were 1000 agricultural jobs available through its Working for Victoria program.

But Agriculture Minister Jaclyn Symes said it was likely there would be up to 20,000 vacancies that could be filled between now and May. "That's what the industry tells us," she said. 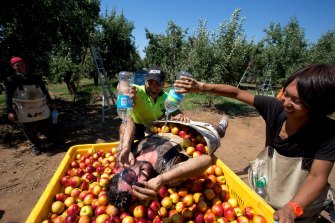 A state government campaign to encourage people to consider fruit packing and picking will be translated into multiple languages. Credit:Simon O’Dwyer

The target areas with labour shortages include the Sunraysia region for grapes and citrus, Yarra Valley for berries and the Goulburn Valley for apples, stone fruit and pears.

Ms Symes said the campaign was about seeking "new audiences" who may want to try their hand at fruit packing or picking while helping out the agriculture sector.

She said the consequences of ongoing farm labour shortages would flow through to all Victorians.

"If the farmers can't get their food off their properties, that will inevitably mean we'll be paying more whether it's in cafes or at the supermarket," Ms Symes said.

If the farmers can't get their food off their properties that will inevitably mean we'll be paying more … in cafes or at the supermarket.

She said young people may be willing to try a summer of farm work after the pandemic limited their employment options.

"We've potentially got a lot more people displaced from their work at the moment. We think a lot of young people moved home to country areas."

The campaign to attract seasonal workers comes after the federal government offered financial incentives to young people on JobSeeker and the Youth Allowance to take up farming work earlier this year.

Mr Jochinke said assistance with moving and accommodation costs, potential on-farm quarantining and bubbles with other countries that posed a low coronavirus risk were among the options that needed to be included.

"Some of those things are being done and some aren't."

He said the pandemic had drawn attention to worker shortages, something that had been an issue for quite a while.

"I think when we talk about employment and agriculture we've had a problem for a very long time," he said. "We're seeing a problem that's always been there but we've never really fully addressed."

Chris Hazelman, manager of the Ethnic Council of Shepparton and District, welcomed the campaign. He said there was "obviously a need" for it, given that Europeans and many Pacific Islanders, who made up a high proportion of seasonal agricultural workers, weren't coming to Australia.

"It leaves a significant issue of the labour shortage," Mr Hazelman said.

"We already have, annually, large numbers of people from new arrival communities come to Shepparton to pick fruit, as a seasonal thing. And it's logical that the government would be encouraging more of them, because there is an opportunity here for people to be employed through the season."

Mr Hazelman said rural areas, including north and east of Shepparton, were seeing record harvests of wheat, barley and oats, and the impending fruit harvests "look like being similarly very good".

"So it's an opportunity for people who are looking for work, to relocate to Shepparton for four to five months. They still have opportunities.

"What you see in a normal season where it's European backpackers or Pacific Islander short-term people, they're not going to be here.

"So there will be a worrying shortage of labour at this period of time, hence the government is trying to advertise to get other people to come."

He said Shepparton was already culturally diverse and "there's opportunities in agriculture for employment. Over the years people from Afghanistan, Iraq, Syria and African countries have come to Shepparton because the work provides them with an opportunity for employment".