The Committee for Melbourne has recommended a bushfire-style levy be imposed on Victorian homes and businesses to raise crucial funds for a massively expanded 40-year affordable housing program.

The Andrews government plans to build 12,000 social and affordable homes by 2024, at a cost of $5.3 billion – the largest investment ever made in social housing in the state. 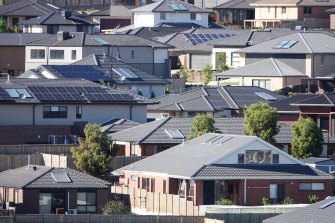 A bushfire-style levy could help pay for more affordable housing, the Committee for Melbourne says.Credit:Paul Rovere

But the Committee for Melbourne, which comprises 140 private and public organisations around the state, said while the government’s building program was commendable it should be hugely expanded.

Previously unreported figures show the need for low-cost housing is increasing faster than the government can build new stock.

In February 49,644 Victorian households were on the waiting list for social housing, compared with 45,698 in June last year. The number of people suffering housing stress, and in need of affordable housing, is far higher.

Committee chief executive Martine Letts said it was reasonable to expect the community to bear some of the cost of an increase in social and affordable housing.

“Increasing the stock of affordable housing is an urgent need and a community responsibility – like the bushfire levy, it helps meet an urgent community need,” she said.

Ms Letts would not put a figure on the levy that would be required to fund further housing construction, saying this should be assessed by industry, government and other parties.

The state government has committed to spending $5.3 billion on building and upgrading social and affordable housing by 2024, although only $300 million has been set aside for purely public housing.

The Committee for Melbourne says the effects of the pandemic and resulting job losses, pay cuts and reduced hours of work have created an urgent need for more social and affordable housing. 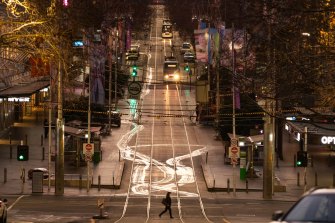 The pandemic led to job losses in Melbourne.Credit:Getty

The pandemic has also exposed the financial pressures borne by key workers, including teachers, nurses and emergency services personnel, who struggle to afford homes near their jobs, and who do not meet the eligibility requirements for social housing.

“It is important for key workers to be able to access affordable housing and particularly in areas close to where they work,” the committee’s report argues.

“But the affordability problem is increasingly pushing many in our society away from where they work – requiring long commutes and impacting their way of life and mental health.”

The committee set up a taskforce comprising town planners, academics, community housing and homelessness workers, developers and consultants to craft recommendations delivered to the government this week.

In its report, the committee also recommends that the government consider making government land available at a peppercorn rent for use in social or affordable housing.

“A significant cost in any development is the initial and ongoing cost of land. Therefore, there is an opportunity for the government to use its excess land to overcome the barrier of land costs to deliver affordable housing.”

The committee favours a statewide levy to fund a 40-year construction blitz it says could eradicate homelessness.

But Ms Letts said further work should be carried out to review the parameters of any levy and that given the governance and transparency issues involved, a third party should disburse the funds.

The call for a levy comes after the City of Melbourne voted to establish a new body, Homes Victoria, to work with community housing providers, support services and developers to try to increase social housing in the municipality under the government’s $5.3 billion Big Housing Build program.

“This is so big and so important, we have to work together to get it right.”

Housing Minister Richard Wynne did not respond directly to the Committee for Melbourne’s proposed levy, or the push to extend the government’s housing program to the next four decades, but said: “I’m always happy to hear ideas on social housing as we develop the 10-year housing strategy and get on with delivering our record $5.3 billion investment.”

“A levy of this nature is going to be a levy anyway. So if it’s going to be a tax it’s really got to be administered by the government in the interests of accountability, if nothing else,” he said.