Stephen Lawrence murder suspect Jamie Acourt must hand over £90,000 of profits he made from £2.1m drugs import plot or be jailed for an extra year

A Stephen Lawrence murder suspect has been ordered to hand over £90,000 of ill-gotten gains from a cannabis importation plot – or be jailed for an extra year.

Jamie Acourt, 44, masterminded the £2.1million racket which saw imported cannabis resin distributed across England, and is serving a nine-year sentence after being convicted in 2018.

The court heard how, after police busted the ring in 2016, he escaped capture in the UK by hiding in the back of a car as he passed through border security and was sofa surfing in Barcelona until eventually renting a flat with two others.

Acourt and his brother were among five men suspected of the murder of Stephen Lawrence, 18, who was killed in Eltham, south east London, in April 1993.

But the charges against the pair were dropped due to lack of evidence.

Two men, Gary Dobson and David Norris, were convicted of the killing. 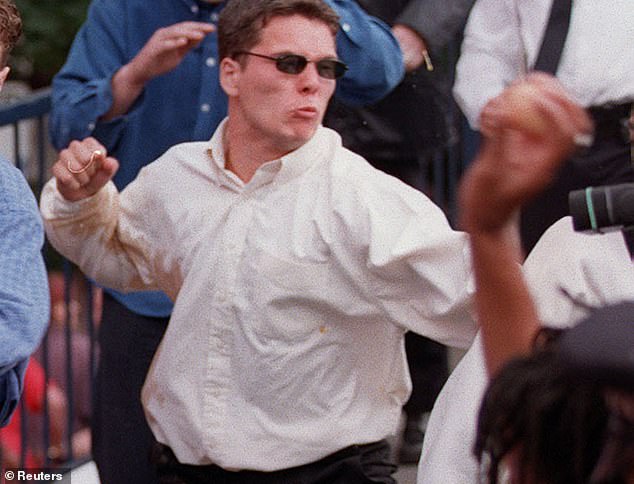 Stephen Lawrence murder suspect Jamie Acourt (pictured above fighting with crowds after a public inquiry into Stephen’s death in 1998), 44, has been ordered to hand over £90,000 of ill-gotten gains from a cannabis importation plot – or be jailed for an extra year

Acourt told the judge that, while on the run, he supported himself by doing maintenance work for a landlord, making commission by finding them new tenants, and working as a personal trainer.

In all he claimed he was making roughly £4,000 each month, leaving him £1,700 after paying for rent and accommodation.

The racist murder that shocked the nation 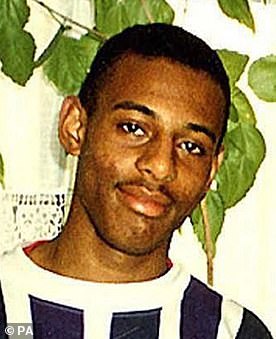 Acourt and his brother were teenagers when Stephen Lawrence was stabbed to death at a bus stop in Eltham, south-east London, in April 1993.

Two of the other suspects, Gary Dobson and David Norris, were convicted of murder in 2012 and jailed for life following a DNA breakthrough.

But the Acourt brothers have never been convicted.

At the time of Stephen’s death, the Acourts described themselves as the Krays, modelling themselves on the brothers who dominated London’s criminal underworld in the 1960s.

The gang they were in is believed to have been responsible for a string of violent attacks, invariably featuring knives.

Despite standing before the same judge who sentenced him and branded him the ‘ring leader’ of the cannabis conspiracy, Acourt tried to tell the court his only job was counting and delivering money.

He added his brother, Neil – who also uses the surname Stuart – gave him the job because he was ‘down on his luck’ after a hernia operation and couldn’t continue his normal building work.

He claimed he made roughly £5,000 each time he counted cash and passed it on but only carried out his role five times before leaving the gang in 2015.

But prosecutor Sarah Przybylska suggested he was lying, claiming it seemed more than a co-incidence that five was the number of times cops proved he had done it during his trial.

She also said evidence suggested he was receiving cash from his cousin, convicted money-launderer Jason Stuart, back in the UK.

The court heard how Jason was found by police with a bag containing around £60,000 and an encrypted phone – using a programme called PGP, similar to one which matched a box found in Acourt’s home in 2016.

Because of this, she said, police believed the money was destined for Acourt and suggested he had possibly received transfers in the past which weren’t intercepted.

Ms Przybylska estimated he had amassed around £90,000 in hidden assets – a figure accepted by the judge.

She added police uncovered a notebook in his Spanish flat which listed a number of valuable watches – something the prosecution claim showed he may have been hiding money by buying jewellery.

Concluding the hearing, Judge Lodder said: ‘My findings in respect of this defendant’s role were set out in my sentencing remarks – that being that he was someone who took a leading role.

‘I described him as a ring leader. To that must be added his evidence today in which he stated he enjoyed a profit share arrangement.

‘I am satisfied that he benefited form this particular criminal conduct in the sum of £500,000.

‘I am also satisfied that he had benefit from general criminal conduct and that is in sum varied.

‘The defendant asserts that he has, in effect, no assets and certainly no hidden assets but when his house was searched in February 2016 police discovered a note on the wrapping of a Blackberry phone about a PGP connection – that is, as it were, an encrypted form of communication. 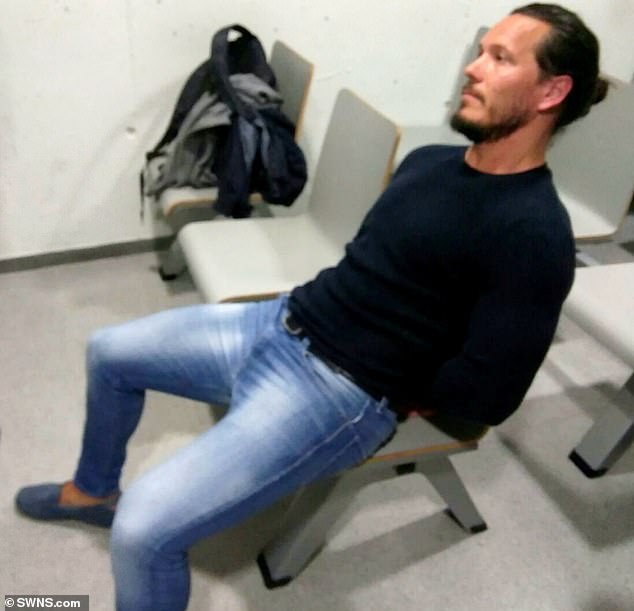 Acort, pictured above in Barcelona after being arrested, masterminded the £2.1million racket which saw imported cannabis resin distributed across England.  He is currently serving a nine-year sentence after being convicted in 2018

‘He had, of course, by then been, or perhaps, succeeded to abscond to Spain.

‘Later that year in November his cousin, Jason Stuart, was arrested for money laundering.

‘He and at least one other were involved with drawing almost 60,000 euros and at that time the defendant’s cousin had in his possession a PGP phone and that had a Spanish sim card. 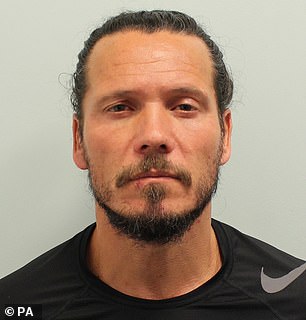 A judge at Kingston Crown Court ruled Acord had £90,000 in hidden assets

‘This gives rise to a clear inference that the money was being passed to this defendant and I find that to be so.

He added: ‘Following the calculation made by the prosecution after the defendant’s evidence, he obtained a, and I use the phrase ‘bare minimum’ of £30,000 from drugs.

‘There was surplus of drugs of some £30,000 as a result of his activities in Spain and there was the withdrawal to which I have just referred of approximately £60,000.

‘I am invited to infer that at least another £30,000 would have been withdrawn which I think is wholly appropriate.

‘That then computes to a total figure of £90,000 in hidden assets which I find is this defendants position. 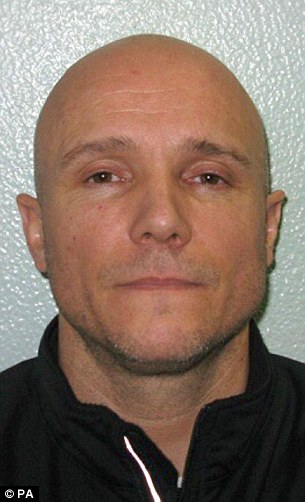 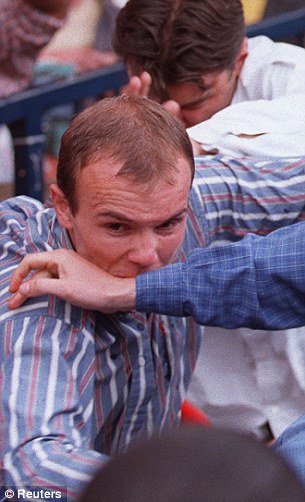 Jamie’s brother Neil (pictured, left, after his arrest in 2016 and, right, after the 1998 public inquiry) also ran the drugs gang and was jailed in 2017

Neil Acort walked free in 2019 having served less than half his sentence.

They were convicted of conspiracy to supply class B drugs along with three more men; Paul Beavers, Darren Thompson, and James Botton.

After his 2018 conviction, Jamie Acourt’s lawyer cited the notorious killing of Stephen as he pleaded with the judge to take pity on his client.

Michael Holland QC said at the time: ‘This is an instance of a man who was overwhelmed by events, events that have followed him since he was 16.

‘He could not face the idea of coming into court again and face the amount of press coverage he would face.’ 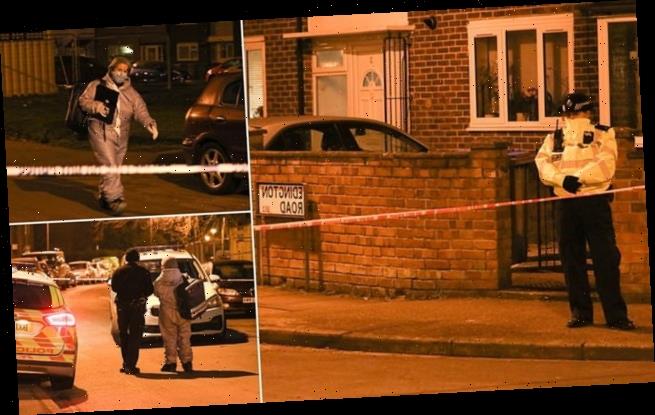 Murder probe launched after boy, 18, is knifed to death in London
Celebrities Posts