Lockdowns may be the main topic of conversation for most Melburnians, but many people living outside the city are still suffering from the impact of last week’s extreme weather. For them, not having to wear a mask outdoors will offer little reprieve.

Distribution company AusNet Services has told some of its customers in the Dandenongs they should prepare to be without power for another three weeks. And Yarra Valley Water has confirmed that more than 700 households are likely to be without drinking water for several days in Kallista, Sherbrooke and The Patch. About 100 homes have been assessed as uninhabitable, while many more have been badly damaged. 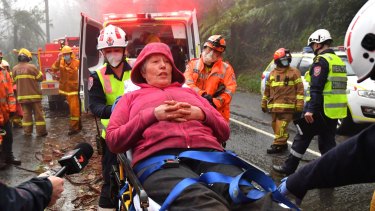 A woman is rescued from her house after a tree landed on it, causing significant damage.Credit:Joe Armao

Residents in those areas hit hardest cannot recall a night of wild winds quite like it. The Victoria State Emergency Service says it was its busiest ever week, with many thousands of calls for help across the state. Two people were killed.

Victoria’s emergency management centre has warned Melburnians, who are free to travel into regional Victoria from Friday, not to visit areas battered by the floods and storms. With rain and winds of up to 60km/h forecast for Gippsland on Friday and Saturday, there are concerns trees already buffeted by floods and strong winds could cause more damage, and potentially worse.

It has been a challenging 18 months for Victorians. The bushfires over the summer of 2019-20 were the most devastating to hit the state since Black Saturday more than a decade ago. While this country has been spared the worst of the pandemic, Victoria had one of the longest lockdowns in the world and the highest death toll in Australia.

These latest wild weather conditions only add to the challenges. It’s important that those who have had their livelihoods disrupted again are not forgotten. Being told to stay at home is one thing, but having a tree fall or flooding that ruins your car, business or home is quite another.

After the clean-up is complete, there should also be time to assess how the emergency authorities and essential service providers responded to the extreme weather. While they have helped many thousands in this time of need, there have been some shortcomings: flood warnings sent out after the waters had already risen, towns remaining isolated for days without phone reception, cutting off access to triple zero, and messages sent out offering false hope that power supplies would be returned.

And an energy emergency has been declared for the Yallourn coal mine and power station in Gippsland, which was forced to drop its output last week because of the flooding. Floodwaters are threatening to breach the mine, which would take almost a quarter of the state’s power generation out of the network for several months.

Much work remains to be done. Yarra Ranges councillor Cathrine Burnett-Wake, whose ward takes in some of the worst-hit areas in the Dandenongs, warned that they were facing a disaster as serious as anything they had ever seen. “Despite their incredible efforts, emergency services and volunteers are overstretched and simply cannot cope,” she said.

Acting Premier James Merlino has offered disaster relief payments of up to $1680 a week for those households without power from Thursday this week. That will be welcomed by the many people who are running generators or finding other means to power their homes during winter. The state must mobilise in every way possible to assist people literally left out in the cold.

Many may have their attention, quite rightly, on COVID-19. But this is also a time to ensure that those doing it particularly hard are not forgotten. The Age extends its thoughts and best wishes to everyone who has been caught up in this latest natural disaster.