Aventura Florida: A lone fingerprint and a set of misspellings helped point FBI agents to a Florida man with a long criminal record now charged with mailing homemade bombs to prominent critics of President Donald Trump.

Cesar Sayoc, 56, a former pizza deliveryman, West Palm Beach strip-club worker and virulently partisan supporter of the president, was arrested on Friday and charged with a string of crimes in connection with the homemade pipe bombs sent this week to former president Barack Obama, former secretary of state Hillary Clinton and others. 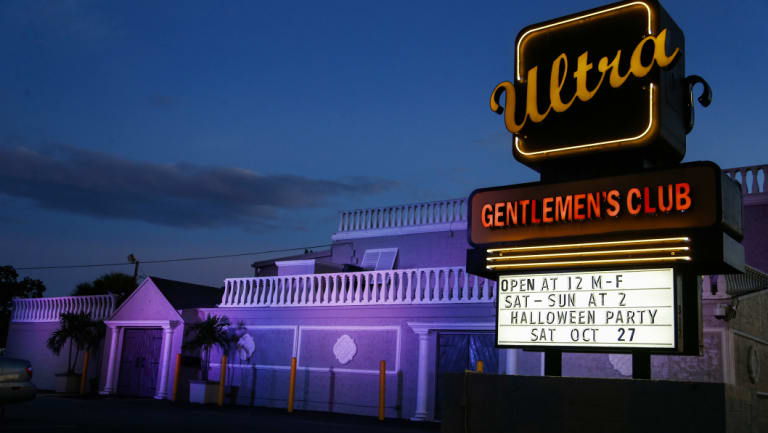 The manhunt began on Monday afternoon, when a pipe bomb was found inside a package delivered to billionaire activist George Soros, and ended less than 96 hours later with Sayoc's arrest outside an auto supply store in Plantation, Florida. Sayoc, who lives in nearby Aventura, was arrested near his vehicle: a white van festooned with political declarations echoing Trump rhetoric.

Agents tried to question him immediately, according to one law enforcement official.  Sayoc did not want to talk and quickly demanded a lawyer, the official said.

Trump told reporters later that he did not think he bears blame for the alleged crimes.

"No, not at all," Trump said as he left the White House for a political rally in North Carolina. "There's no blame; there's no anything," Trump said. 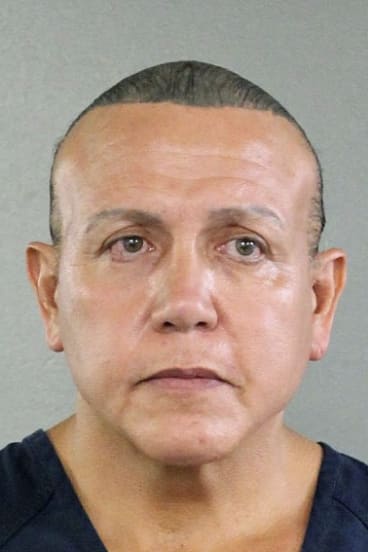 The nation's top law enforcement officials gathered at Justice Department headquarters in Washington on Friday afternoon to announce that the case that had put government officials and their agencies on high alert was solved.

"We will not tolerate such lawlessness, especially not political violence,'' Attorney-General Jeff Sessions said. "Let this be a lesson to anyone, regardless of their political beliefs, that we will bring the full force of law against anyone who attempts to use threats, intimidation and outright violence to further an agenda."

As Sayoc was taken into custody, investigators across the country continued to chase potential bombs. Three such devices were discovered on Friday – in Florida, New York and California – and officials warned there may be other, undiscovered packages in the mail system or a mailbox somewhere in the United States.

"We need all hands on deck, we need to stay vigilant," said FBI director Christopher Wray.

Wray said investigators were able to pinpoint Sayoc after finding a fingerprint on an envelope containing a bomb sent to Democratic politician Maxine Waters, and that DNA found on two of the devices was a possible match to a sample previously taken from Sayoc during an earlier arrest in Florida.

One law enforcement official said the fingerprint discovery was a major breakthrough. With that, authorities began zeroing in on Sayoc on Thursday, gathering mobile phone records to track his past movements and conducting real-time surveillance of his location and activities, the official said. 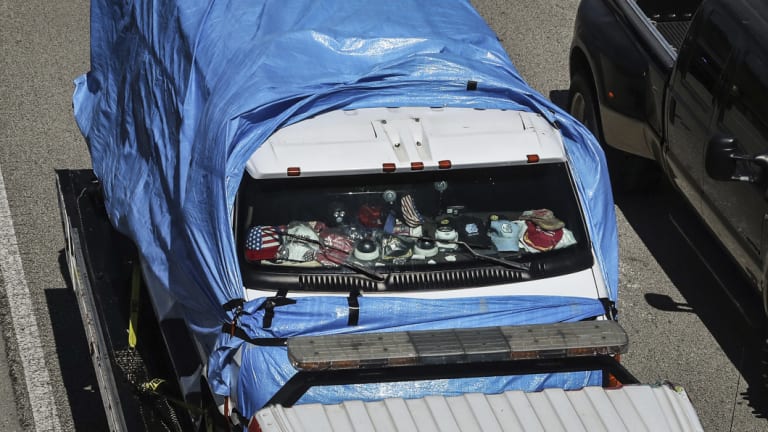 The van FBI agents are investigating in connection with the mail bomb campaign.Credit:AP

Wray declined to say whether the pipe-bomb devices could have detonated, noting that investigators are "still trying to determine whether or not they were functional". But he said they did contain potentially explosive material, adding: "These are not hoax devices."

Sayoc, whose long criminal history includes a past arrest for making a bomb threat, was charged with five crimes that could send him to prison for decades: transporting explosives across state lines, illegally mailing explosives, threatening former presidents and others, threatening interstate communications and assaulting federal officials.

Inside each of the packages sent to four of the potential targets – Obama, former CIA director John Brennan, Soros and Waters – was a picture of the individual with a red "X" mark, according to the 11-page complaint signed by FBI special agent David Brown.

The complaint also included details suggesting Sayoc's antipathy towards the people and organisations targeted, including the news network CNN, where two of the packages were addressed.

Some of those postings included the same misspellings contained on some of the addresses on the pipe-bomb packages, including the last name of one of the recipients, Debbie Wasserman Schultz, a prominent Florida Democrat and former chairwoman of the Democratic National Committee. On both the packages and the social media posts, her name was spelt "Shultz", according to the complaint.

When asked why Sayoc allegedly targeted Democrats, Sessions said he "appears to be a partisan, but that would be determined by the facts as the case goes forward''.

Sayoc's previous run-ins with law enforcement date back at least to an arrest for larceny when Sayoc was 29, according to state records. Other charges of larceny, grand theft and fraud followed across the southern part of the state. In 2002, he was arrested for a bomb threat called in to power company Florida Power & Light. Sayoc pleaded guilty without trial and was sentenced to probation, the records show.

Asked on Friday about pro-Trump stickers or signs on the van allegedly driven by the suspect, Trump said: "I did not see my face on the van. I don't know, I heard he was a person who preferred me over others."

The FBI said a package, "similar in appearance to the others" found this week, was addressed to Booker and located in Florida.

A package recovered Friday at a Manhattan postal facility was addressed to Clapper, a CNN contributor. Just two days earlier, CNN's offices in New York were evacuated when the package for Brennan, addressed to him at the network, was found in the  post room.

A package addressed to Harris found Friday at a Sacramento mail facility was the 13th such device officials said they had linked to Sayoc.

The list of possible targets began with Soros, then grew to include Obama, Clinton and former attorney-general Eric Holder. Then came the packages sent to Brennan and CNN, Waters, former vice-president Joe Biden and actor Robert De Niro.