Student gets 'yellow card' from university for 'inappropriate' dress

A medical student at Newcastle University was given a disciplinary ‘yellow card’ for wearing an ‘inappropriate’ dress to an exam, despite it being cut below the knee.

The woman, who studies graduate entry medicine, was taking part in a clinical examination when she was allegedly given a ‘yellow card’ for her ‘short skirt’.

The student, who goes by The Graduate Medic on Twitter, said she complained to Newcastle University after getting the disciplinary, but alleged she was told it was ‘the most inappropriate dress they had ever seen’.

She claimed she was told that the examiner’s word was ‘final’ and said the investigation into the incident had been closed, adding: ‘isn’t discrimination lovely’.

Newcastle University have since apologised to the medical student in a social media statement, claiming that the yellow card was rescinded after an investigation earlier this year. 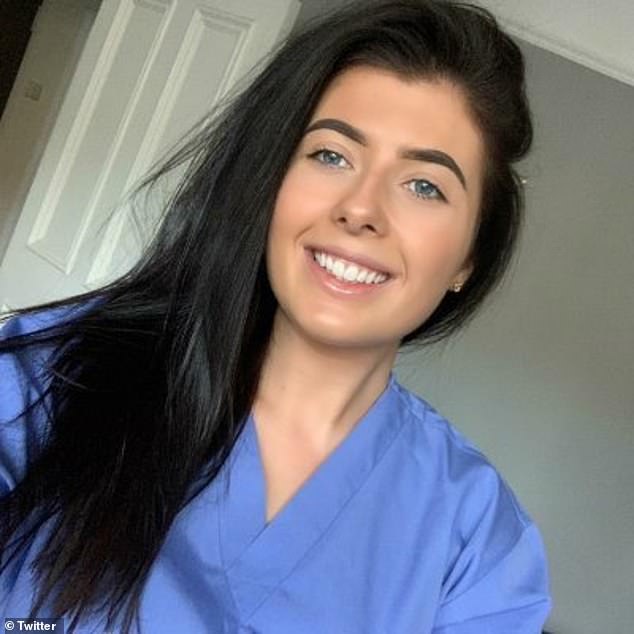 A woman (pictured), who studies graduate entry medicine, was taking part in a clinical examination when she was allegedly given a ‘yellow card’ for her ‘short skirt’

Her case was initially shared on Twitter by her friend, who wrote: ‘A friend did their OSCE’s [Objective structured clinical examination] with me recently & got yellow carded for wearing a ‘short skirt’…

‘Could someone explain to me how it’s 2021 & medical schools are still pushing sexist notions of primness upon its female student cohort, for daring to display their ankles.’

The post was accompanied by a picture of the dress in question, which was a black V-necked dress that was cut below the knee.

Responding to the tweet, the student in question alleged the complaint stated they would not have wanted her to treat ‘their friends or a family member’ because she was not wearing ‘leg coverings’.

She penned: ‘Word for word; “student had short dress with no leg coverings – roleplayer commented immediately station said looked unprofessional and I agree”.

‘Belittling the situation and the fact that no action has been taken with the examiner, is not an apology.’ 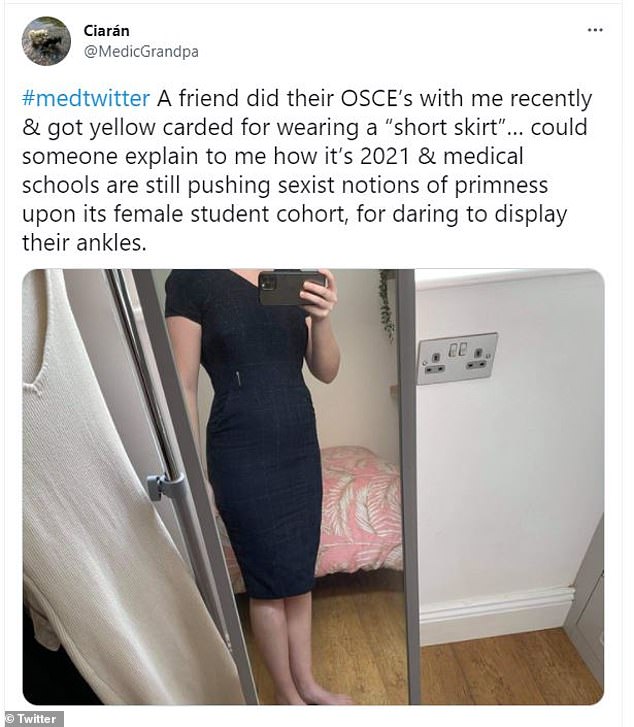 The student said she complained to Newcastle University, but alleged she was told it was ‘the most inappropriate dress they had ever seen’. Pictured: Dress she was disciplined for wearing

Newcastle University have since apologised to the student in a social media statement, claiming that the yellow card was rescinded after an investigation earlier this year

The woman said although she loves the teaching at Newcastle University, she does not ‘respect’ the way the situation was handled.

She continued: ‘I’ve done all the right things. I used the process that is specifically created surrounding discriminatory issues.

‘I’ve avoided giving the details of the University/clinician even down to their gender, I haven’t posted the damning full response to protect those investigating it.’

The student also claimed she had to lodge a separate concern to deal with the examiner.

She added: ‘I was refused the right to not have the examiner again, and the University closed the investigation.’

In a statement on Twitter, Newcastle University said: ‘We want to apologise once again to @thegradmedic for any offence or distress caused by this incident.

‘The comment was made by a role-play patient as part of an exam. All comments made by patients in exams are passed on to students as feedback.

‘However, we agree it should not have resulted in a yellow card from the examiner. This is why, when the concerns were raised with us by @thegradmedic earlier this year, they were investigated and the yellow card was rescinded.

‘We would not want any student to come away from these exams feeling remarks like this in any way reflect the values of the University and the issues will be addressed in future examination briefings.’

But the medical student hit back at the university’s statement, alleging that she was given no ‘verification’ that the comments came from the patient.

In another tweet, the student said she was in contact with the British Medical Association about the incident and said she was ‘disappointed’ by the university sharing ‘incorrect’ information.

Hundreds of Twitter users have since flocked to the woman’s defence, with some alleging that the comment and the handling of the situation was ‘sexist’. 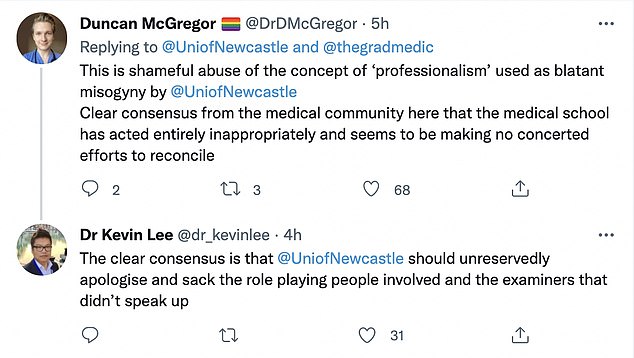 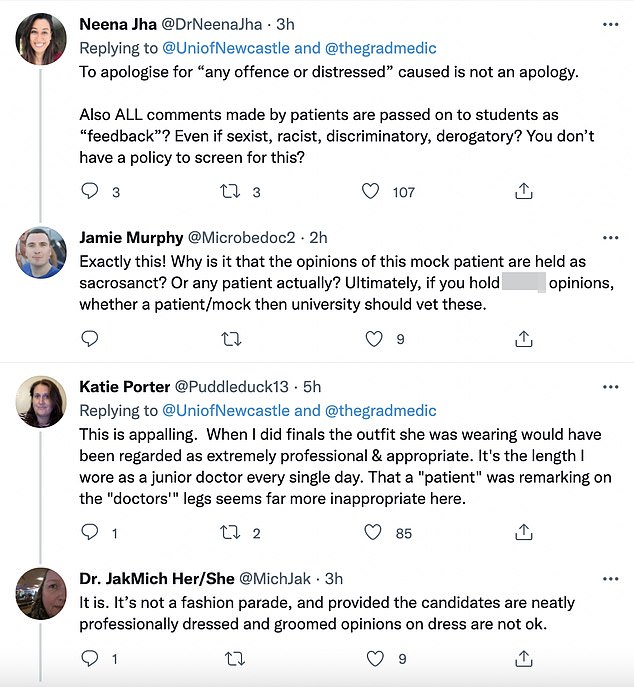 Hundreds of Twitter users have since flocked to the woman’s defence, with some alleging that the comment and the handling of the situation was ‘sexist’

One wrote: This is appalling. When I did finals the outfit she was wearing would have been regarded as extremely professional & appropriate.

‘It’s the length I wore as a junior doctor every single day. That a “patient” was remarking on the “doctors'” legs seems far more inappropriate here.’

Another fumed: ‘This is a ridiculous response. My female GP colleagues at work wear similar and no one would think it mattered. This needs challenging, now.

‘Because it suggests a misogyny that is permeating that medical school which concerns me greatly. Do not let this lie. Get support.’

A third said: ‘The clear consensus is that @UniofNewcastle should unreservedly apologise and sack the role playing people involved and the examiners that didn’t speak up’

And a fourth wrote: ‘What exactly did the other women wear?? If this is inappropriate?? It’s many years since I say my osce but my dress wasn’t dissimilar neither was the one I wore for graduation or multiple interviews since??!!! [sic]’

While a fifth tweeted: ‘absolutely f**king ridiculous. that dress is smarter clinical dress than what 90% of practicing doctors wear on a daily basis and in no way inappropriate. discrimination at its finest indeed.’