Students wait three months for at least £9,675 to be returned

Students are left furious after being forced to wait up to THREE MONTHS for nearly £10,000 in rental deposits to be returned by estate agents

A student estate agents has been accused of pocketing thousands of pounds worth of deposits – after three student households were left waiting more than three months for a total of nearly £10,000 to be sent to their accounts.

Sam Pringle, 20, spoke to MailOnline after his house of five were left waiting three months for their £3,675 deposit to be returned by Cintra Estates in Reading.

Another female student, who wished to remain anonymous, says she was forced to call Ridgemoor Properties, an affiliate of Cintra, every day for 12 days straight when her household’s £2,700 deposit failed to appear two months after they’d moved out. 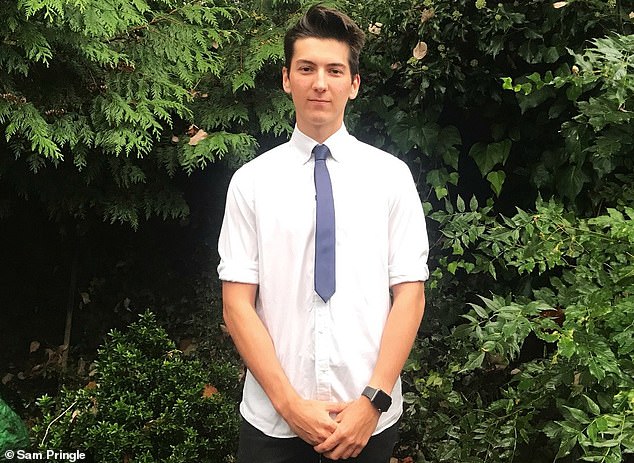 Sam Pringle (pictured), 20, spoke to MailOnline after his house of five were left waiting three months for their £3,675 deposit to be returned by Cintra Estates in Reading

Bethany Allis, another student at the University of Reading contacted this website to ask for help and student Lauren Richards says her housemates are waiting for their £3,300 deposit to be returned.

Sam Pringle took to social media to warn others about his experience after three months had passed without Cintra Estates returning his £735 deposit.

The post read: ‘To any students or anyone that knows students that are looking to rent a house in this area, AVOID RIDGEMOOR PROPERTIES AND CINTRA ESTATES.

‘Me and some other students rented a house with them last year and over two months after moving out they still have not returned our deposit (which by the way was extortionately large).

‘They constantly avoid contact, and if you do manage to contact them they’ll agree to pay it back and then not do it. They have said they’d pay us back by at least five specific dates and those days have come and gone and it’s still not been returned.

‘We are not the only ones going through this. Countless other students who have gone through them have shared similar stories (and it wouldn’t surprise me at all if it was everyone that went through them).’ 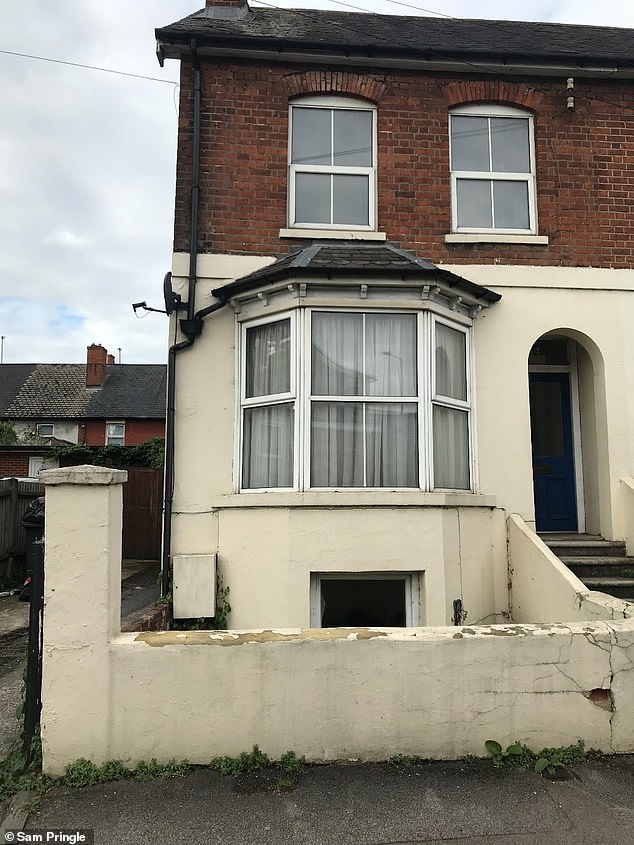 Mr Pringle moved out of this house in Reading in July – but the five tenants had to wait until this month for their combined £3,675 deposit to be returned

Hundreds of students quickly commented on the post with their own experiences.

Speaking to MailOnline Mr Pringle said: ‘They dodged calls, we emailed and they didn’t respond. I made a Facebook post telling people to avoid them at midnight and the next morning at 7am I had an email telling me they were returning my deposit.’

The third-year maths student says it is ‘unfair’ and ‘taking advantage of people who are too scared to approach them’.

Mr Pringle’s housemates have now had their deposit returned after Cintra Estates were approached by MailOnline, but others are still waiting.

Another 20-year-old student who is still waiting for her £675 deposit was ‘told every excuse under the sun’ when she rang Ridgemoor Properties.

She said: ‘I’ve been calling every day for the past month. They say the phone doesn’t work, the credit card machine is broken and the finance team are slow but as far as I can see it’s a one-man company.

‘It seems so slow. There are hundreds of people in the same position.’

And Lauren Richards, another University of Reading student, says only two out of her seven housemates have been given their £660 deposits back. 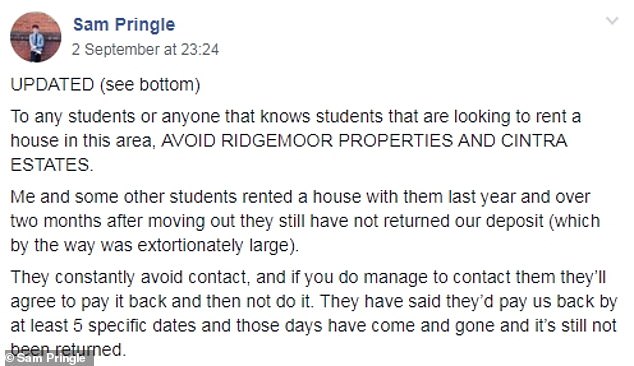 ‘It has now been two months since my flat mates and I moved out of our house with Ridgemoor Properties/Cintra Estates and only two out of the seven tenants have received their deposits back.

‘We have all paid £660 so we have an outstanding balance of £3,300 between us. We have been promised on many occasions that we would get our full deposit back but most of us are yet to receive this.’

According to housing law, landlords or estate agents working on behalf of landlords have ten days to return a deposit once any disputes have been settled.

Alan Tibber, a Partner at Tibber Marks Solicitors, said: ‘The Landlord or agent is entitled to hold back some of the deposit if they have a valid reason as to why, for example if there is any damage to the property caused by the tenants, or if there is any unpaid rent or bills.

‘If the money is being held in a custodial based scheme, both parties can use the providers own dispute resolution service.

‘If the parties still cannot agree the tenant will need to make a claim for the return of the rent deposit at the local county court.

According to housing law, landlords or estate agents working on behalf of landlords have ten days to return a deposit once any disputes have been settled. Pictured, Cintra Estates

‘If the Landlord or agent doesn’t respond at all to the tenant’s request for the deposit to be returned, then two weeks after the tenant has requested the money back via the scheme, the tenants can make a claim for the money back.

‘They will need to swear an oath in front of solicitor detailing the circumstances in which they are entitled to receive the deposit back.

‘If the Landlord or agent still doesn’t respond within a further 2 weeks, then the deposit will be released to the tenant.

‘If the money is being held in an insurance based scheme, failing any agreement, the tenant may again use the schemes own dispute resolution service, failing which the tenant must obtain a court order confirming that the deposit is to be repaid back the tenants.

‘Once the court order has been obtained they can send a copy of it to the relevant scheme provider.

My strong advice is that if you are a student entering into an Assured Shorthold Tenancy, insist that the Landlord or their Agent, use a Custodial based scheme, where the deposit is actually held by the company.

‘This way the student can apply directly to company for the deposit to be returned in the event that the agent or landlord refuses to release the money or if there is a disagreement.’

Cintra Estates, Ridgemoor Properties, The University of Reading Students’ Union and Reading Borough Council have been approached for comment.