Tokyo: New Prime Minister Yoshihide Suga wants to compile a basic policy on a new digital agency by the end of this year, to speed up the digitisation of Japan's outdated government administration.

While the government of Suga's predecessor Shinzo Abe made "digital transformation" its main policy plank this year, the switch has proved difficult due partly to a vertically structured bureaucracy that hampers efforts to use common platforms for administrative work.

Suga has pledged to make sweeping changes to overcome the digital woes, which were blamed for delaying delivery of cash payouts to help citizens withstand the impact of the coronavirus pandemic. 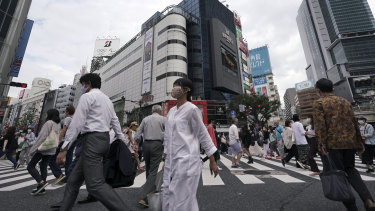 Commuters walk at Shibuya pedestrian crossings in Tokyo on Monday.Credit:AP

"We need to make an organisation with personnel of high ability from public and private sectors, which would lead digitisation in the overall society," the Nikkei quoted Suga as saying.

"I want to accelerate discussions to do so, compile basic policy by the end of this year and submit necessary bills to next ordinary session of parliament." 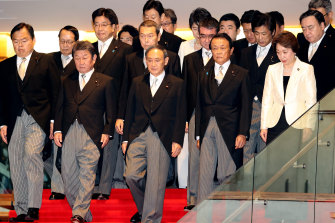 Takuya Hirai, digital transformation minister, said on Friday that Suga had told him to accelerate preparations for setting up the new agency. And he and government officials met over the weekend to discuss the agency.