Enjoy it while you can! Sunshine brings 77F heat today before wind and rain returns for rest of the week – though forecasters predict new heatwave for the weekend

Parts of Britain are expected to enjoy the last of a brief warm spell today, with temperatures rising above 75F in Kent, before wind and rain returns for the rest of the week – but there’s a glimmer of hope for the weekend.

Canterbury is set to bask in 77F temperatures by around 4pm today, according to Met Office forecasts, while London and other parts of the South East will be enjoying dry and bright spells.

Cloud and rain will start slowly creeping in from the west this morning, with Manchester, Birmingham and parts of Wales set to experience some wet weather.

Temperatures are expected to dip to highs of 69F tomorrow, but could potentially reach up to 82F by Friday or Saturday. 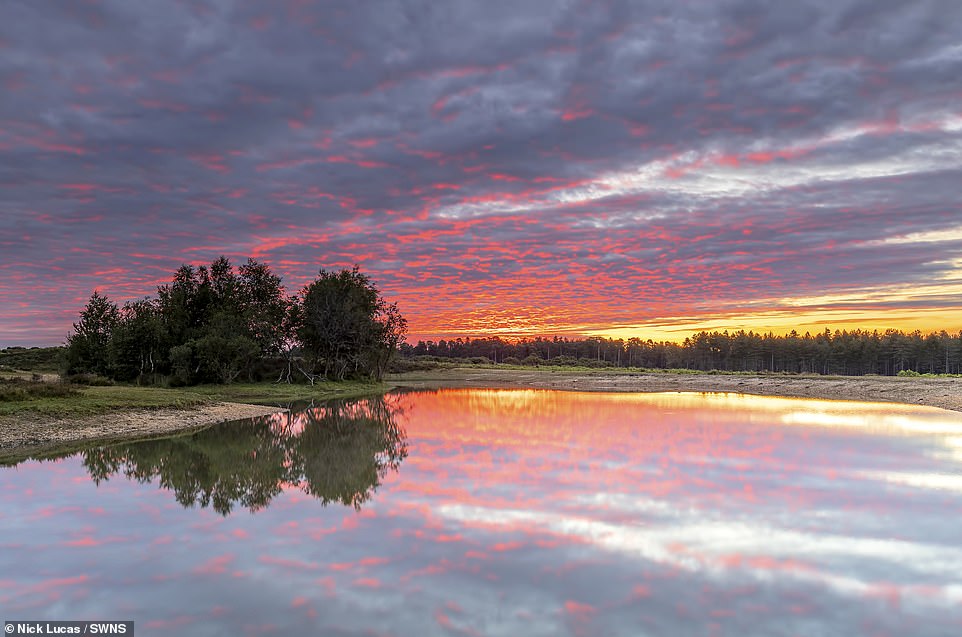 Warm weathers and bright spells will continue today, including at the New Forest (above), before cloudy spells and rain start to move west across Britain 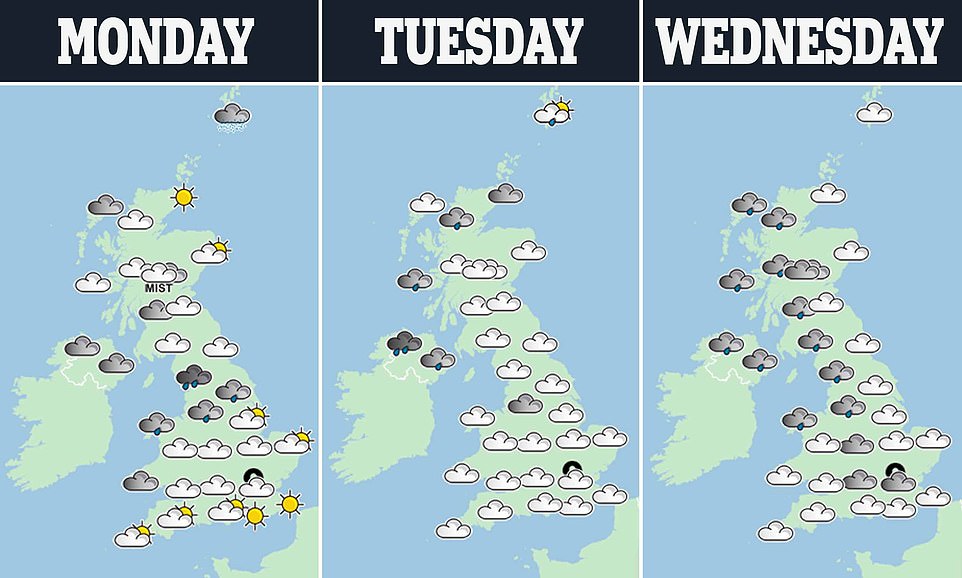 The Met Office’s forecast for today predicts: ‘A dry start with some sunshine in southeast England. Otherwise cloudy with occasional rain moving east. Some drier and brighter spells developing across northern Britain, with further rain or showers across Scotland.’

By tonight it expects: ‘Cloud and rain in the south slowly clearing, while rain and showers will continue across northern Scotland. Mainly dry elsewhere.’

Tomorrow is set to be wet and windy in parts of the country, with strong winds moving west. The outlook for the rest of the week suggests outbreaks of rain and drizzle from Wednesday, becoming confined to the North on Thursday and Friday, as weather gets hotter in the south.

Yesterday saw temperatures reach as high 77F at Heathrow, with a low of 34F in Sennybridge. 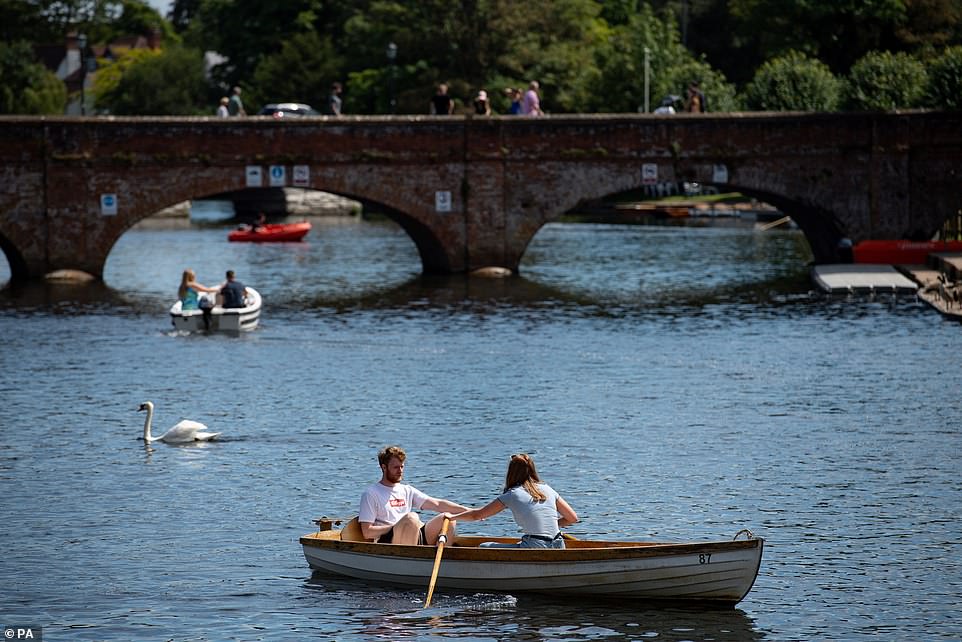 Warm weather on Sunday had couples taking to the water in Stratford-upon-Avon in Warwickshire. A weekend of sun is expected to come to an end today, with rain and cloud moving in from the west

Shoeburyness enjoy just under 16 hours of sunshine, while there was 5.4mm of rainfall in Harris Quidnish, off the coast of Scotland.

Flying ants descended on parts of the country yesterday, but today’s wet weather is likely to bring an end to the wave of insects.

There’s a glimmer of hope for a heatwave heading into the weekend and next week, but it may come with heavy downpours and ‘unsettled weather’.

The Met Office forecast for Friday onwards reads: ‘More unsettled conditions with spells of rain and strong winds are likely to affect the north and northwest at times.

‘There is chance that these wetter interludes could spread more widely and affect much of the UK. Temperatures are likely to be mostly around normal, although it may become warm for a time in the south and perhaps very warm in the southeast.

‘Towards the end of the period, more settled conditions are likely to develop, across many parts. Spells of wetter and windier weather are possible across northern and western areas at times.’ 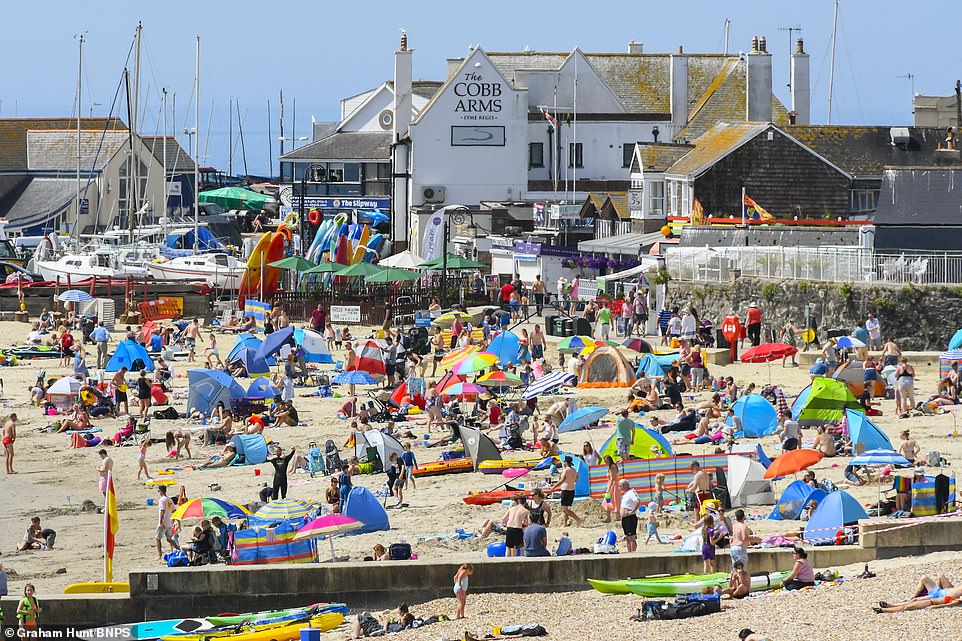 Families in Country Antrim dived into the water at Red Bay harbour during Sunday’s warm weather, despite the sunny spell, this July is set to be one of the coolest on record 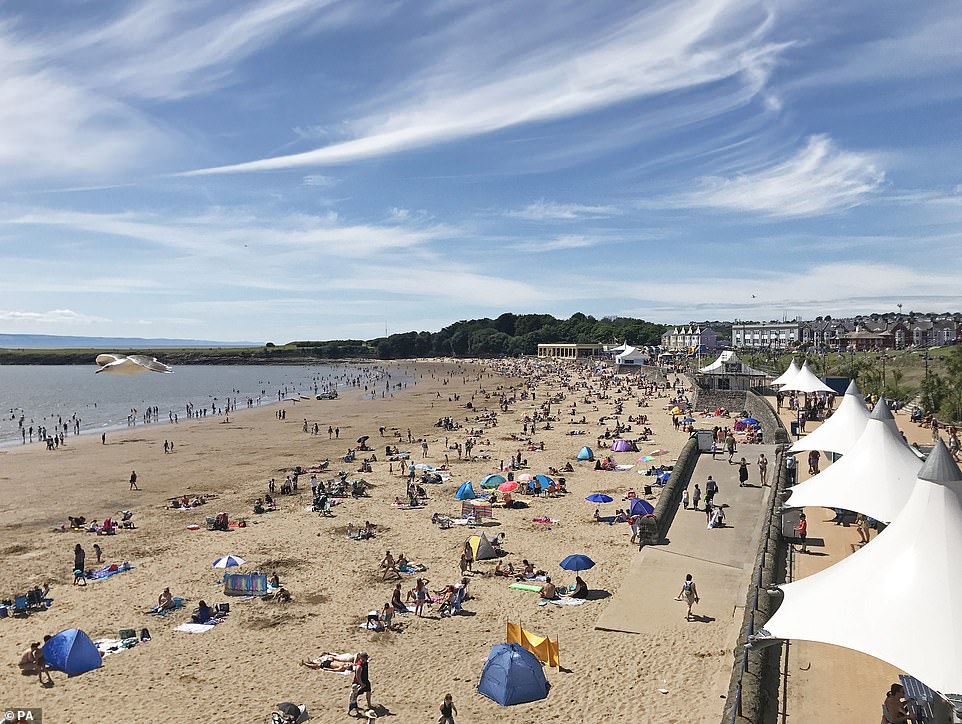 There was room for social distancing at Whitmore Bay in Barry Island, South Wales on Sunday afternoon as beach goers enjoyed the sun

July is still on track to be the coolest for 32 years as part of what forecasters have dubbed a ‘payback summer’.

July is on course to be the coolest since 1988, Met Office figures for the month so far show.

Rainfall is also close to double the normal so far, at 30mm in England and Wales, Met Office data showed.

Cool Atlantic winds and a lack of continental heat are blamed. June was one of the wettest for 89 years – wetter than all but eight Junes since 1931, with UK rainfall up almost 50 per cent at 106mm.