Supermarkets are most common 'exposure setting' to Covid-19, says data

Supermarkets may be the most common place where people in England are exposed to coronavirus, official data has suggested.

Public Health England’s weekly surveillance report claimed almost 20 per cent of the 128,800 cases they examined had visited the shops in the seven days before they tested positive.

This was the highest proportion of visits out of the 16 locations considered — which also included schools, care homes and hospitals.

Supermarkets are one of the only shops allowed to stay open in England’s second national lockdown, which is set to end on December 2.

Stores have put in place Covid secure measures including regular cleaning, hand sanitisers at the entrance and only allowing a set number of shoppers inside.

Experts at PHE today insisted their data did not suggest supermarkets were at the centre of coronavirus transmission in the UK, saying it does not prove where someone was infected with the disease.

And Helen Dickinson, the chief executive of the British Retail Consortium, said it was ‘misleading and irresponsible’ to suggest supermarkets are a source of Covid-19 transmission.

She said: ‘Supermarkets are one of the very few places that people can visit during lockdown so it is unsurprising that they feature strongly when people are asked where they have visited.’ 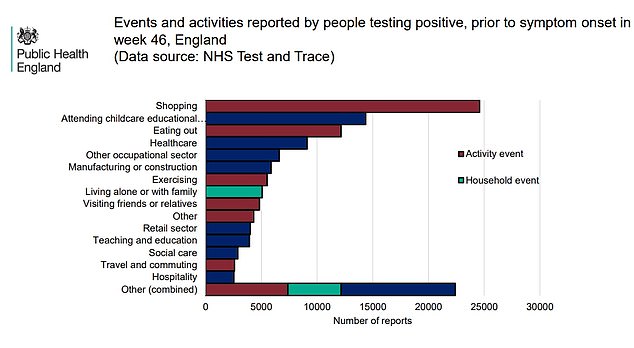 Supermarkets had the most visits from people who then tested positive, a Public Health England report says

PHE used contact-tracing data to establish where those infected with the virus had been in the week before they tested positive.

These figures are ‘primarily used to identify where someone may have caught their infection’, the officials say in the report.

Secondary schools had the second highest number of cases linked back to them – or 12.7 per cent. It was followed by primary schools – with 10 per cent – and hospitals – with three per cent.

Isabel Oliver, director of the National Infection Service at Public Health England, said: ‘Suggestions that supermarkets are causing Covid-19 to spread are inaccurate.

‘Common exposure data does not prove where people are contracting Covid-19.

‘It simply shows where people who have tested positive have been in the days leading up to their test and it is used to help identify possible outbreaks.’

Helen Dickinson, chief executive of the British Retail Consortium, said: ‘It is misleading and irresponsible to use this data to suggest that supermarkets are a source of transmission of Covid in England.

‘The figures do not explain how or where people became infected, they simply explain where people have visited.

‘Supermarkets are one of the very few places that people can visit during lockdown so it is unsurprising that they feature strongly when people are asked where they have visited.

‘Retailers continue to follow all safety guidance to make their premises Covid-secure.

‘They have spent hundreds of millions on safety measures including perspex screens, additional cleaning, and social distancing, to keep customers and colleagues safe.’ 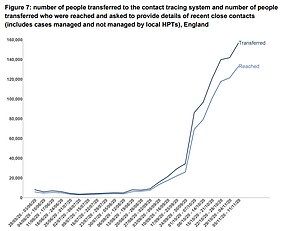 NHS Test and Trace has failed to reach a record number of Covid-19 cases, after finally appearing to get slightly better last week.

Figures published today by the Department of Health show it missed 21,419 positive cases in the seven-day spell to November 11, the largest number since the system was launched in the UK.

Of close contacts, those who had been near Covid-19 cases for more than 15 minutes before they tested positive for the virus, the system reached the same proportion – 60.5 per cent – as the previous week.

But this meant they failed to get hold of almost 189,885 people who could be infected with the virus, leaving them to continue to circulate in the community and possibly spread the disease further. In the previous week they missed 190,835 of these individuals.

Test and Trace — which Boris Johnson promised would be ‘world-beating’ — has fallen short of its targets for weeks. It has been struggling to get through to many Covid-19 patients and their contacts since infections began to surge again in late September.