London: The German paedophile suspected of abducting Madeleine McCann “repeatedly worked” at the holiday apartments in Portugal where the child vanished, documentary makers have revealed.

Christian Brueckner was said to have been employed by a company that carried out repairs at the Ocean Club, in Praia da Luz, shortly before the three-year-old British girl disappeared there in 2007. 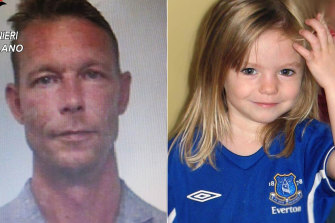 Christian Brueckner, the prime suspect in the disappearance of three-year-old Madeleine McCann.

An anonymous but “reliable” witness has told reporters at German TV channel SAT.1 that the convicted sex attacker “repeatedly carried out repair work” at the holiday apartments where Kate and Gerry McCann were staying with their children.

Producers for the show have handed police a file following “extensive research” in the Algarve resort.

In a statement to the media, the makers of SAT.1 investigativ: Neue Spuren im Fall Maddie, to be broadcast on Monday evening in Germany, said Brueckner was “very familiar” with the Ocean Club and town where the McCanns stayed.

A spokesman for the channel said: “A reconstruction of the evening of the crime and extensive research in Portugal and Germany found that Christian B was very familiar with the Ocean Club area in Praia da Luz.

“Prior to Maddie’s disappearance, he repeatedly carried out repair work at the place where the three-year-old disappeared in 2007.”

“There are witnesses who might prefer to speak to the media than to us or the police. If this produces any ideas we will, of course, follow these up.”

The holiday complex could not be contacted last night for a response.

Brueckner, the 45-year-old sex offender, has also written letters in which he continues to insist he had no involvement in Madeleine’s abduction.

He is in jail in his native Germany for raping a pensioner in 2005 in Praia da Luz. He was living nearby in a camper van when Madeleine disappeared in 2007.

Police first became aware of him as a suspect in 2017 but did not publicly name him until 2020. That year, it emerged that Brueckner’s Portuguese mobile phone received a half-hour phone call in Praia da Luz around an hour before Madeleine vanished.

But the TV crew claim “on-site analysis of phone records showed that Christian B and his cell phone must have been no more than five minutes away from the Ocean Club [apartments] on the night of the disappearance.”