Sweden has admitted it is seeing no signs of herd immunity slowing the spread of Covid-19 as the number of new infections soars.

The Nordic country, whose approach to tackling the pandemic has garnered global attention, registered 17,265 new cases since Friday, according to its Health Agency on Tuesday.

The increase compared with 15,084 new cases recorded during the corresponding period last week, with hospital admissions for coronavirus patients almost doubling each week in Sweden.

Anders Tegnell, architect of Sweden’s lockdown-free strategy, had previously claimed that Sweden would fare better than other countries in the second wave after building up a herd immunity. 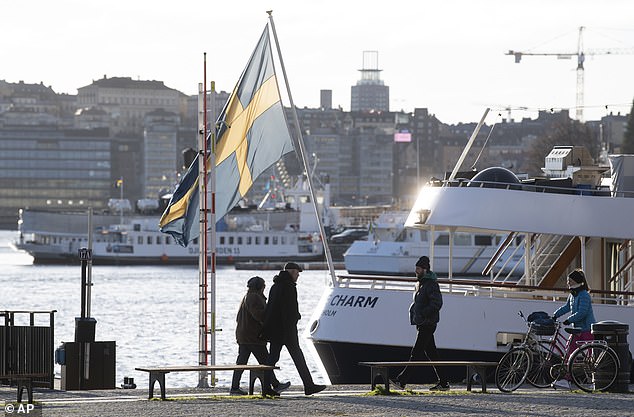 Sweden has admitted to seeing no signs of herd immunity from Covid-19 slowing the spread of the virus as the number of new cases soar. Pictured: People walk along Standvagen quayside in Stockholm on Friday

Sweden registered 94 new deaths, taking the total to 6,500. Sweden’s death rate per capita is several times higher than that of its Nordic neighbours but lower than some larger European countries.

The news came as Sweden’s healthcare watchdog issued a stinging condemnation of the way elderly people in the country have been treated in care homes during the coronavirus pandemic, noting that some patients were left to die without a medical exam.

The Health and Social Care Inspectorate (IVO) said the ‘serious flaws’ could not only be blamed on the pandemic, concluding they existed even when the added stress of the virus outbreak was taken into account.

Nursing homes were ravaged by the initial wave of the coronavirus, prompting Prime Minister Stefan Lofven’s sombre admission in May that the country failed to protect its elderly.

Of the 6,500 deaths linked to Covid-19 in Sweden, nearly half have occurred at elderly care homes and a quarter have been elderly people being cared for at home.

In an audit of care facilities during the period from March to June, IVO noted that a fifth of all coronavirus patients in care homes had not been individually assessed by a doctor, and in 40 percent of those cases the patient was not examined by a nurse either.

In those cases where an assessment was made, the majority were made over the phone, and fewer than 10 percent of patients received a physical examination. 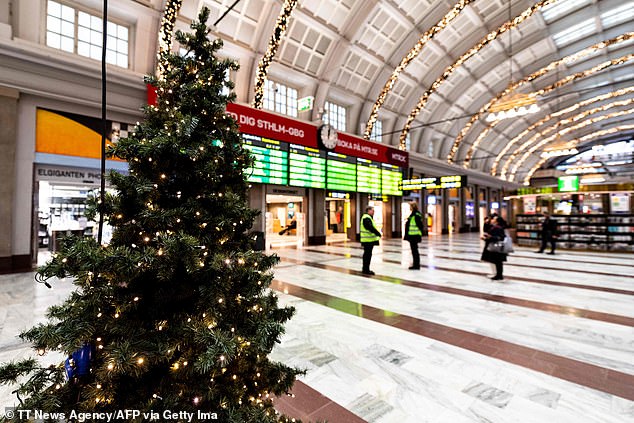 Pictured: A Christmas tree is seen in a quiet Central Station in Stockholm, amid the ongoing coronavirus Covid-19 pandemic. Sweden registered 17,265 new cases since Friday, according to its Health Agency on Tuesday

‘The minimum level (of care) is simply too low, even during a pandemic,’ IVO director Sofia Wallstrom told a press conference.

‘In its investigation, IVO has identified serious short-comings at regional level when it comes to the care provided to people living in nursing homes’

‘This is without question very serious,’ Lofven said in a statement to Reuters. ‘All people have the right to individually adapted care, regardless of where you live or how old you are.’

‘It’s important all regions take this seriously and make the necessary changes. I expect this to be already underway.’

The agency concluded that elderly residents at care facilities had not received adequate care in either confirmed or suspected cases of coronavirus.

IVO also said its study of elderly care had been hampered by inadequate patient records. 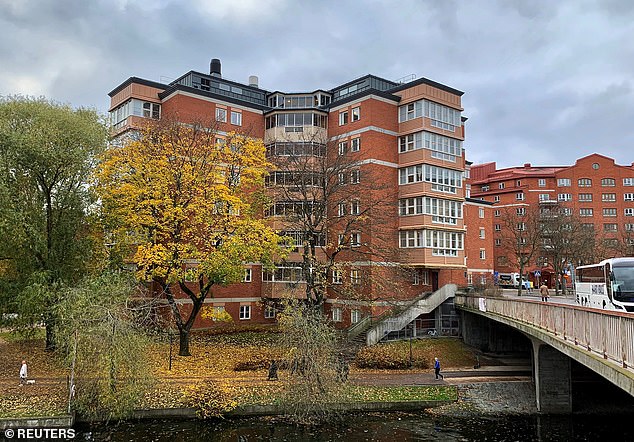 Of the 6,500 deaths linked to Covid-19 in Sweden, nearly half have occurred at elderly care homes and a quarter have been elderly people being cared for at home. Pictured: A view of the Serafen nursing home in the centre of Stockholm

Sweden’s high number of deaths in elderly care has been hotly debated in the country, which has long prided itself on its cradle-to-grave welfare system.

Less than one in ten COVID-19 patients had been examined face-to-face by a doctor with the vast majority of assessments consisting of consultation between nurses and doctors alone, sometimes with primary information stemming only from orderlies.

The probe did not single out individual facilities or staff.

While the failings were identified as ‘systemic’, IVO’s decisions for the individual regions showed some had operated under instructions to avoid hospitalising nursing home patients. One region prescribed end-of-life treatment for any resident with COVID-19 symptoms.

After a lull during the summer, cases have shot up again at elderly care facilities during a second wave of the pandemic, raising fears of a repeat of the deadly spring. Nursing home residents account for nearly half of Sweden’s more than 6,400 deaths among COVID-19 patients.

The watchdog urged regional authorities to carry out measures to improve care and present them no later than January 15 next year and said it would be carrying out a further review of patient records.

The country also famously never locked down to the same extent other European countries did.

While polls have shown widespread support for the strategy, it has also been controversial, especially as its death toll soared above those in neighbouring countries. 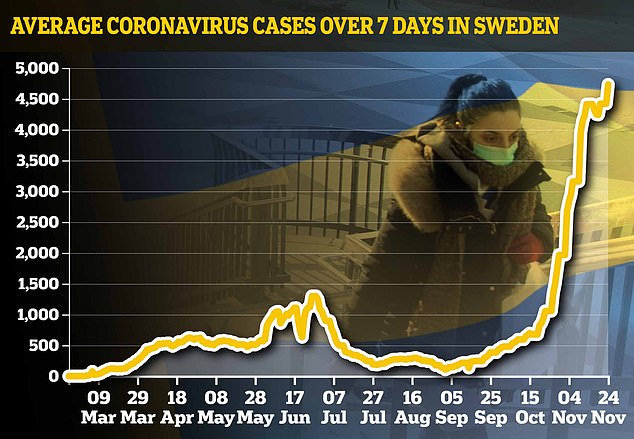 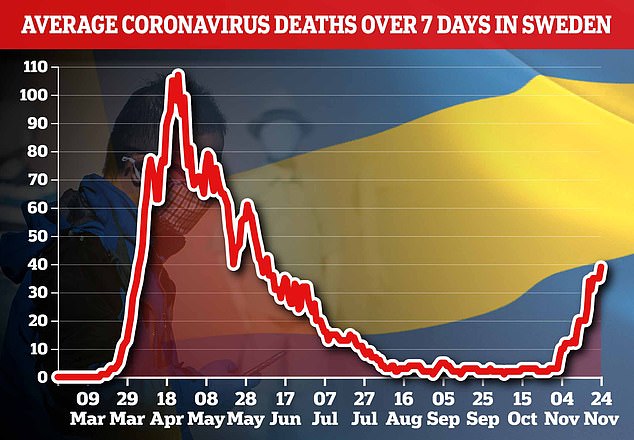 A country of 10.3 million people, Sweden has recorded a total of 225,560 cases of Covid-19 and 6,500 deaths. Pictured: Graphs showing average coronavirus cases (top) and deaths (bottom) over seven days

One of Sweden’s tougher measures was a nationwide ban on visits to nursing homes, imposed on April 1.

The measure was lifted on October 1, but last week the government paved the way for local restrictions.

Last week, Sweden’s top Epidemiologist Dr. Anders Tegnell was forced to admit that Sweden is fighting a second wave of the virus after previously downplaying the risk.

Stricter restrictions were issued in 17 of 21 of Sweden’s regions by the country’s public health body and Dr Tegnell as well as a 10pm curfew on bars a pubs.

‘It is a different situation than we had in the spring when it was more local. Now we have a community spread in many regions at the same time, which is partly a reason why we see such high numbers,’ he said.

Despite the rising numbers and increasing criticism, Tegnell said on November 13 Sweden remains steadfast in its approach to the pandemic. 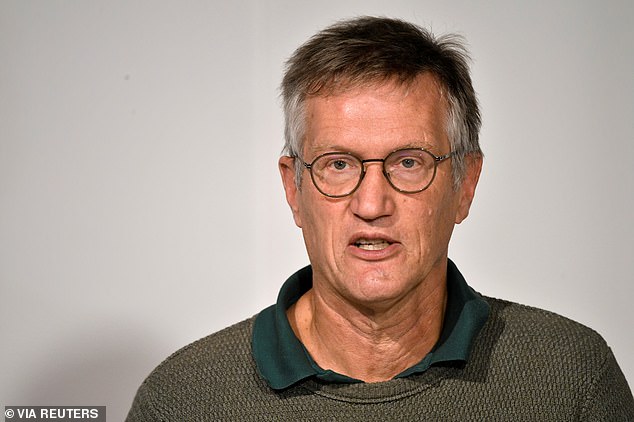 Anders Tegnell, architect of Sweden’s lockdown-free strategy, had previously claimed that Sweden would fare better than other countries in the second wave after building up immunity

In August, Tegnell attributed low infection rates to the development of a herd immunity against the virus developed during the first wave in the spring, when Sweden’s light-tough approach was blamed for one of the world’s highest per capita death rates.

‘The number of people we don’t find with diagnostics is, with high probability, smaller than we thought,’ he conceded last week. 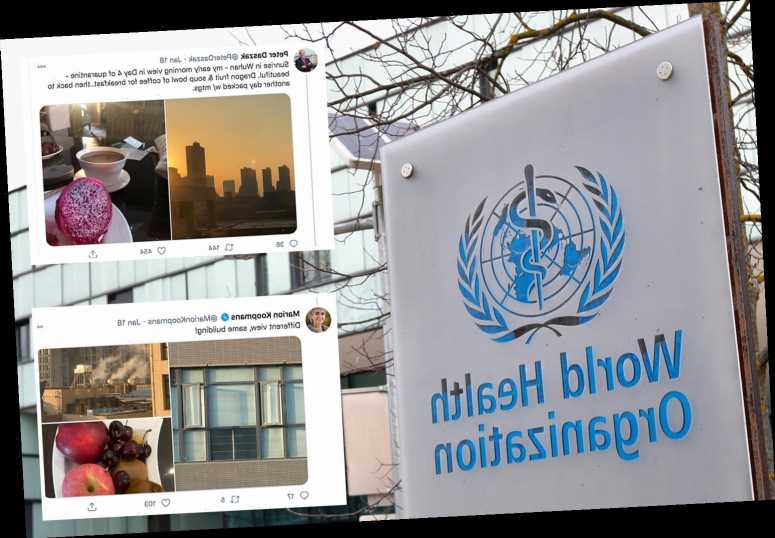 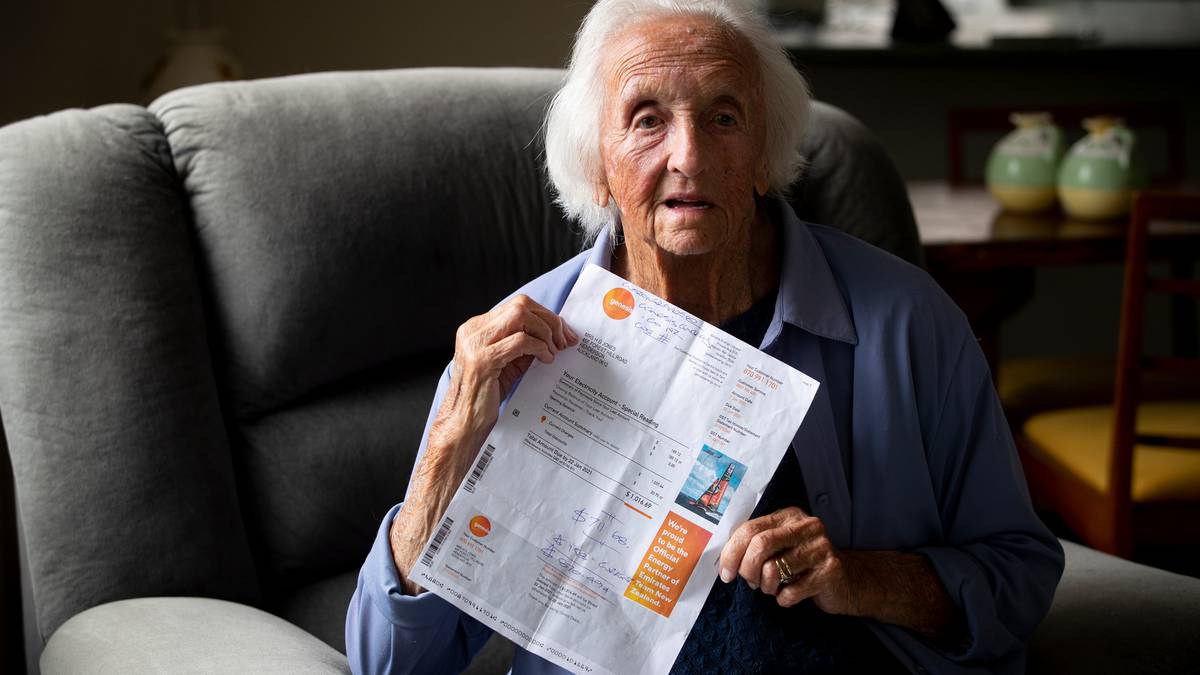 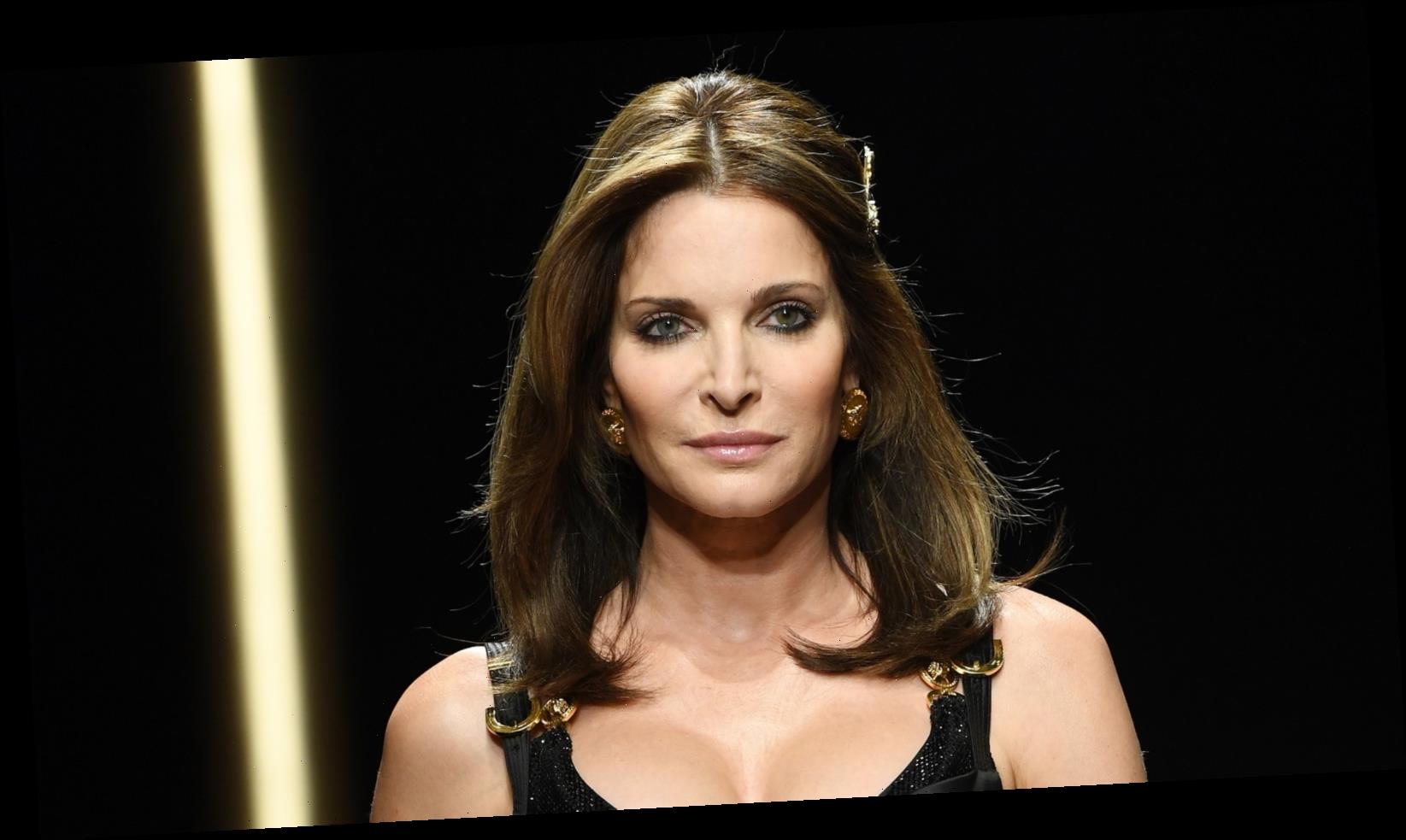 Stephanie Seymour: How Much Is The Famous Supermodel Worth? 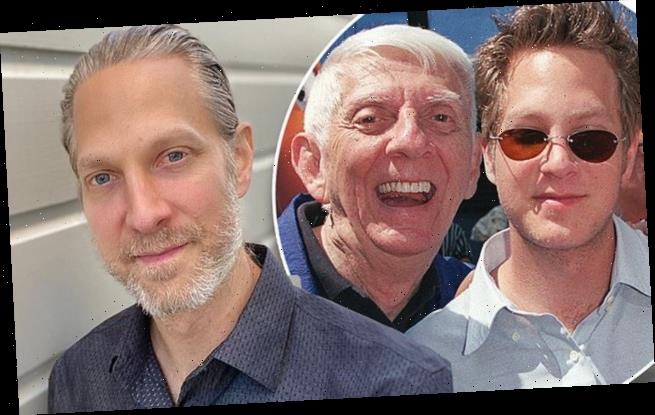 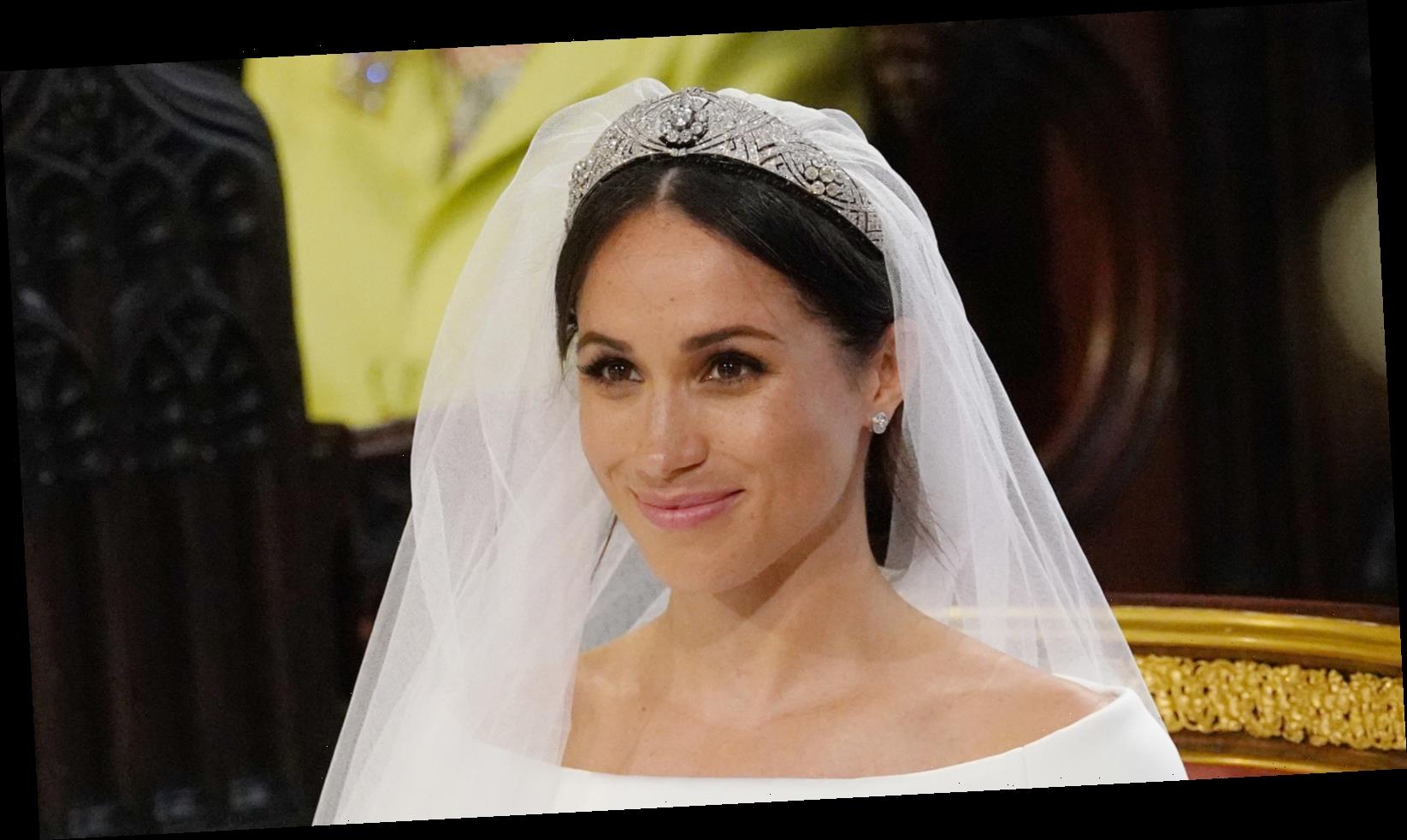