Syria: Half of Idlib's children may miss school as battles rage Save the Children says of the 1,193 schools in war-torn province, 353 are abandoned or damaged and 205 used as shelters. 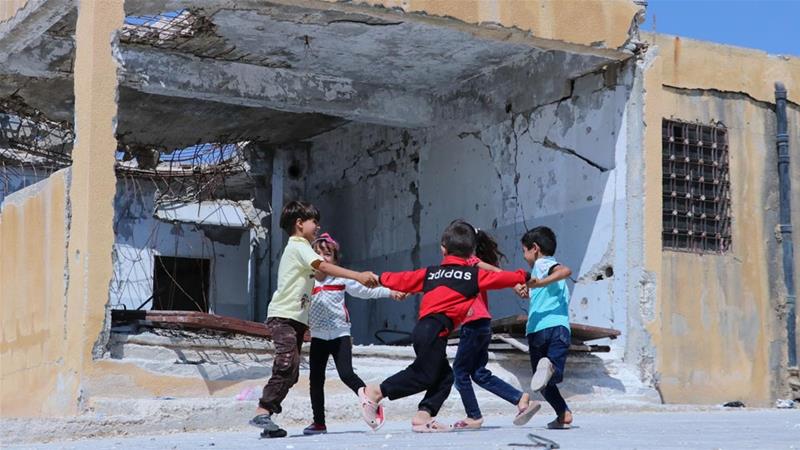 More than half the children living in Syria’s besieged Idlib province will probably be unable to attend school this year as fighting between rebel groups and Syrian forces destroyed hundreds of learning facilities, according to a new report released on Wednesday.

Aid group Save the Children found 87 education facilities were destroyed and hundreds damaged during months of fighting. The schools that remain open are under constant threat of air attacks and shelling.

“Teachers are telling us that parents are pleading with them to shut schools for fear of them being attacked,” Sonia Khush, Save the Children’s Syria country director, said in a statement. “How can the international community stand by.”

Three million residents remain in the war-torn northwestern region, half of whom are already internally displaced from areas previously captured by forces loyal to President Bashar al-Assad, according to the United Nations. Two-thirds of those currently in the province are women and children.

More than 500 people, including more than 140 children, have been killed in Idlib since late April when Syrian forces, backed by Russia since 2015, started an offensive in an attempt to capture the last rebel stronghold in the country.

Since the offensive began, fighting and air raids have forced residents to completely abandon 17 towns in northwest Syria and internally displaced a further half-million Idlib residents, leaving many living in makeshift camps.

Schools, hospitals and other civilian structures have not been spared from air attacks and shelling.

Ali, 10, whose real name was changed to protect his identity, said his school had been ruined in the fighting.

“I saw my school was destroyed. It made me so sad,” he said. “I love my school.”

Out of the 1,193 schools in the area, 635 are operational, while 353 have been abandoned or damaged and 205 are being used as shelters, the children’s organisation said.

As the new school year starts, the remaining functional schools can only accommodate about 300,000 of the 650,000 school-age children, it said.