In Taiwan, baseball is ‘hot, noisy' and ingrained in national identity

Taoyuan, Taiwan: As the batter steps to the plate, the clamour crescendos, a rhyming, thumping chant, often tailored to his name. 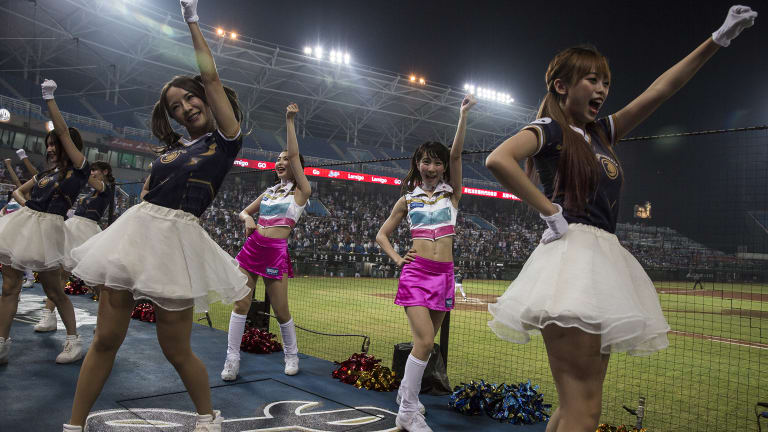 Cheerleaders dance during a baseball game, at the Taoyuan International Baseball Stadium in Taoyuan City, Taiwan.

They are not trying to distract from the opposing team's batter, but to cheer on their own. How any batter manages to concentrate enough in the din to get a hit is anyone's guess.

"Yi qi an da! Yi qi an da!" (pronounced ee-chi-ahn-dah) goes one of the more general chants, which is, roughly, the way to say, "Let's get a hit together."

On a recent night, Chin Jou-lin, an ebullient 28-year-old fan, was sitting along the right-field line at Taoyuan International Baseball Stadium in this city in north-west Taiwan. She said she had heard that in America you could actually hear the crack of the bat hitting the ball. She giggled, incredulous.

To say baseball is a national obsession in Taiwan might be an overstatement since its fortunes have risen and fallen over the years. It does, however, seem deeply ingrained in its national identity as a small but spirited bastion of democracy. 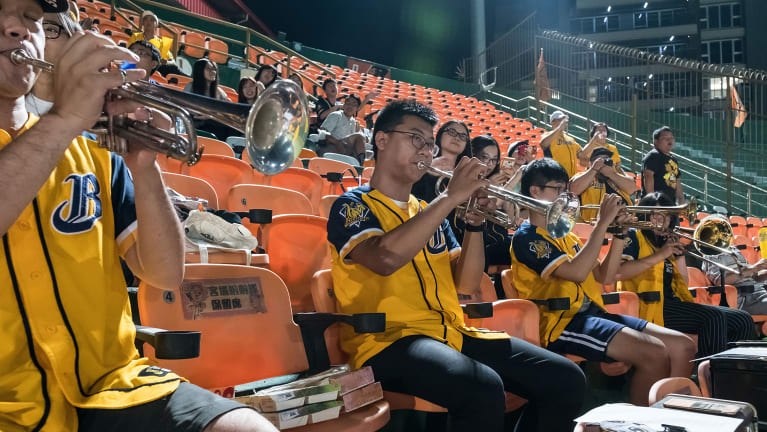 People wearing jerseys of the Chinatrust Brothers baseball team play instruments during a game against Uni-President Lions, at Tainan Stadium, in Tainan, Taiwan.

The 500-note of the island's currency, the New Taiwan Dollar, depicts a baseball team, paying homage to its phenomenally successful youth teams, which, as any ex-Little Leaguer of a certain age will recall, dominated the Little League World Series from 1969 to 1996, winning 17 of 28 finals.

At a time when China endeavours to isolate Taiwan diplomatically, baseball remains one of the island's potent instruments of soft power and a path to international recognition. When the sport debuted in the Olympics in Barcelona in 2002, Taiwan won the silver medal, losing the championship game to another small, baseball-crazed island, Cuba.

"Brazil has football," said Shih Fu-dao, a taxi driver, as he drove  me to another game, this time in Tainan, in southern Taiwan. "Taiwan has baseball."

Quoting taxi drivers is a journalistic cliché that is best avoided, but Shih knew whereof he spoke. His son, Hsiang-kai, played professionally here for four seasons, from 2004 to 2008. 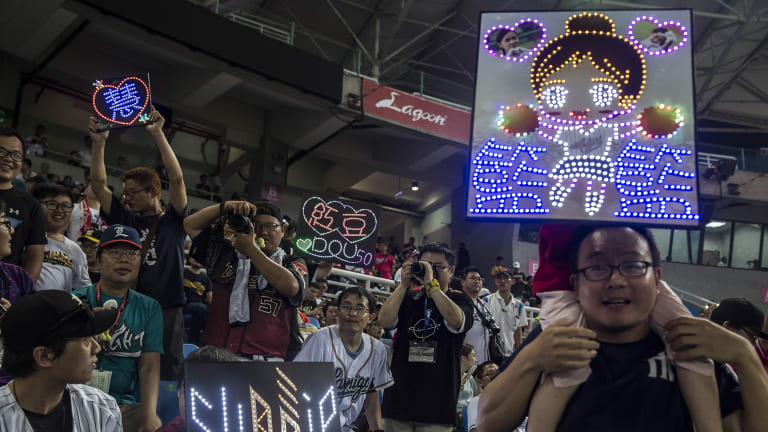 Spectators hold up electronic signs during a baseball game between the Lamigo Monkeys and Fubon Guardians at the Taoyuan International Baseball Stadium in Taoyuan City, Taiwan.

For all its obvious connections to the American pastime, baseball is not an American import. It came through Japan, where baseball had already been played for a quarter century when the Japanese seized Taiwan in 1895. At the time, Taiwan was controlled by the Qing-era rulers of China.

Andrew D. Morris, a contributing writer to "Baseball Beyond Our Borders: An International Pastime," wrote that the Japanese legacy shapes the game to this day, one more thing that distinguishes Taiwan's identity from China's.

After the forces of Chiang Kai-shek retreated to Taiwan and established the Republic of China following the Communist Revolution in 1949, the new government sought to erase the vestiges of Japanese rule, except for baseball. 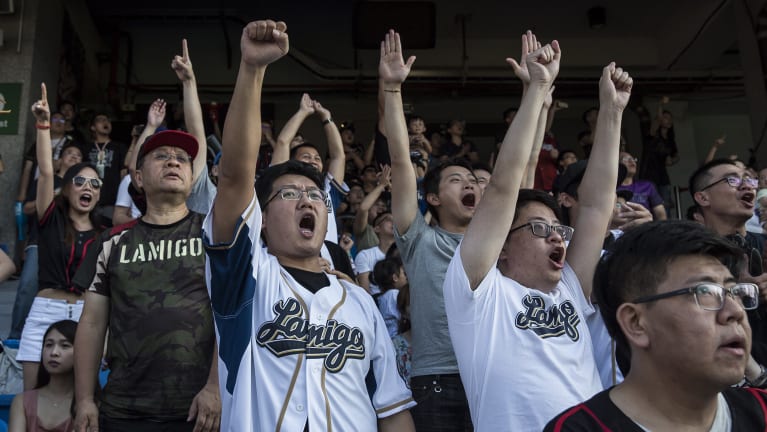 Fans of the Lamigo Monkeys baseball team cheer during a game at the Taoyuan International Baseball Stadium in Taoyuan City.

The game's history since then has been as turbulent as the island's transition to democracy.

The Chinese Professional Baseball League — its very name a reflection of Taiwan's complicated history with China — formed only in 1990, after a long era of martial law that ended in 1987.

Teams have formed and folded, the league expanding and contracting. Scandals over gambling tarred the game. In 1996, gangsters kidnapped players who apparently did not follow through on a fix.

An even broader betting scandal erupted in 2008, leading to accusations against scores of players for accepting cash and sex with prostitutes to fix games. One team was expelled; another withdrew.

A year later scandal flared up again, implicating players from the Brother Elephants, one of the league's most popular teams.

At the game's nadir in 2009, Taiwan's government and league executives intervened and vowed to clean up the sport, improving salaries and policing gambling more aggressively. 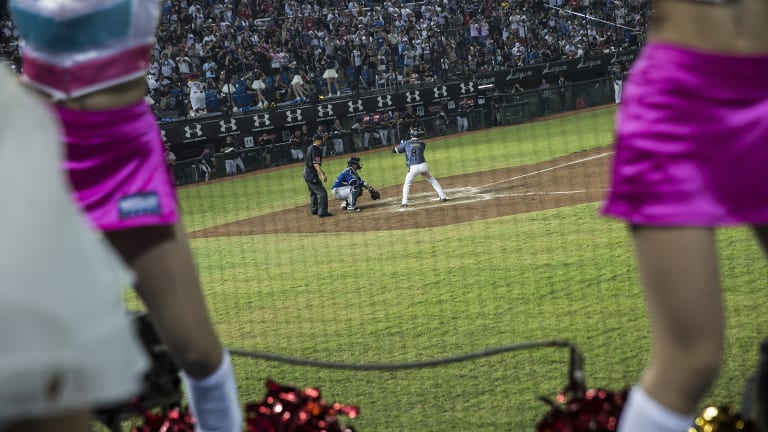 Baseball is one of the most potent instruments of soft power in Taiwan, a small but spirited bastion of democracy.

The league since then has settled down with four teams: the Lamigo Monkeys; the Uni-President 7-Eleven Lions, named after the convenience store, which is ubiquitous here; the Chinatrust Brothers, the franchise that emerged from the tainted Brother Elephants; and the newest, the Fubon Guardians.

Only the Monkeys, winners of the championship three of the last four years, have a dedicated stadium, beside the high-speed train station in Taoyuan. The others rotate home stadiums, though they are associated with their cities: the Guardians in Taipei, the Uni-Lions in Tainan and the Brothers in Taichung.

There is a consensus the league has been making a comeback. One reason is the most famous foreigner to play here: Manny Ramirez, a player with a stellar, though checkered career in the United States.

In 2013, after two suspensions for violating Major League Baseball's drug policy, Ramirez came to Taiwan. While he played in only 49 games, attendance soared and it has remained steady since.

Attending games at the stadiums can feel like a tailgate party that rolls right into the stands before turning into an aerobic workout. Everyone seems to know not only the words to a lineup's worth of chants, which have a delirious mix of English and Chinese, but also the dances that go with them.

The experience at the ballpark can be so giddily polyglot that it seems only a little odd that a cheesy 1979 pop song by the German band, Dschinghis Khan, could be repurposed as a cheer for the Monkeys. "Go, go, Lamigo …."

Chin is a devoted fan of the Monkeys but also of the vibe in the stands. She commutes regularly to the games from Miaoli, an hour south by train. She was there on a recent evening with her boyfriend.

"He likes baseball," she explained, speaking a little more loudly since at that particularly deafening moment the Monkeys were padding their lead over the Guardians, 15-2, "but he doesn't like to dance."

Asked what attracted her to the game, she used a two-word phrase in Chinese whose meaning might not otherwise translate were it not uttered in a Taiwan ballpark on a sultry summer night: