New York: The Taliban have nominated Mohammad Suhail Shaheen to be Afghanistan’s ambassador to the United Nations and requested that their foreign minister be allowed to address the UN General Assembly taking place this week in New York.

But the request may run up against some diplomatic hurdles.

In a letter to UN Secretary-General Antonio Guterres, the Taliban said former President Mohammad Ashraf Ghani was ousted as of August 15 and that countries across the world “no longer recognise him” as the war-torn nation’s leader. Farhan Haq, a UN spokesman, confirmed the letter. 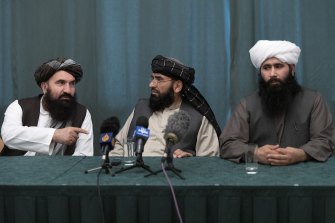 Suhail Shaheen, centre, has been nominated by the Taliban as their Un ambassador. Credit:AP

With Ghani’s UN ambassador, Ghulam Isaczai, currently in place at the global organisation, the Taliban said they want acting Foreign Minister Ameer Khan Muttaqi to be allowed to address the General Assembly.

Yet some officials have said any move by the UN’s Credentials Committee to approve a new Afghanistan ambassador wouldn’t take place quickly enough to allow a Taliban representative to address the gathering, allowing Isaczai to still deliver a speech next Monday despite being part of a the former government.

While few nations have officially recognised the Taliban’s takeover of Afghanistan, the militant group and UN officials are working together to provide food and other aid to avert a growing humanitarian crisis in Afghanistan. Separately, the US says it is still communicating with the Taliban in efforts to evacuate dozens of citizens still in the country who seek to leave, as well as Afghans who had helped American and NATO forces during 20 years of war.

But US and allied officials say those efforts are a long way from granting formal recognition of the Taliban, citing issues including the militant group’s treatment of women and its ties to terrorist groups.

Earlier, Afghan rapper and activist, Sonita Alizadeh, urged world leaders to stand up for the rights of women and girls now the Taliban had returned to power.

“What will remain of our people? And what will remain of the 20 years of achievements? Do not be fooled by the masks the Taliban show on the news,” Alizadeh told a virtual event on the sidelines of the assembly.

“We have no time,” she pleaded.

She urged the international community not to recognise the Taliban, guarantee the rights of women and children, ensure internet access for the Afghan people, include more Afghans in decision making and keep girls in school.

“It looks like we all know what must be done. But the question is that, who will take action today?” Alizadeh said.

The Taliban say they have changed since their 1996-2001 rule, when they also barred women from leaving home without a male relative, and the international community has said they will hold them to their commitments, although it is unclear how it will do so.

“There is real and palpable fear among Afghan women of a return to the Taliban’s brutal and systemic repression of women and girls during the 90s,” UN human rights chief Michelle Bachelet told the same event on Tuesday.

The Taliban stirred scepticism about their pledges on the rights of women and girls when they said last week that they would open schools for high school-aged boys but not girls.

UN Secretary-General Antonio Guterres said last month the Taliban’s desire for international recognition is the only global leverage to press for inclusive government and respect for rights, particularly for women, in Afghanistan.