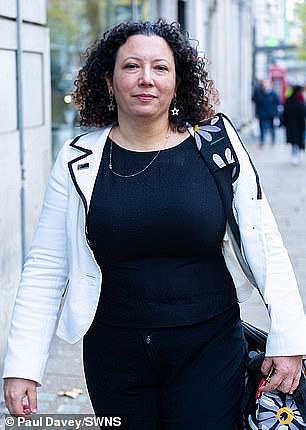 Maya Forstater, 47, insists her views are based on ‘fundamental scientific facts’

A tax expert who was sacked after claiming people cannot change their biological sex insist her views are based on ‘fundamental scientific fact’, an employment appeal tribunal has heard.

Maya Forstater’s contract was not renewed at an international think-tank in 2019 after she posted a series of controversial opinions including that ‘men cannot change into women’.

The Central London Employment Tribunal upheld the dismissal after judge James Tayler described her beliefs as ‘not worthy of respect in a democratic society’.

Her case gained national attention after Harry Potter author JK Rowling voiced her support, and said she disagreed with the tribunal’s decision to throw out the tax expert’s discrimination claim.

In a landmark case that raises issue of gender, sex and free speech, Miss Forstater yesterday launched an appeal against the ruling accusing the employment tribunal of being ‘Orwellian’ in its verdict.

Today the 47-year-old reiterated her views that biological sex is ‘real, important, immutable, and not to be conflated with gender identity.

Ms Forstater said she was ‘concerned’ children were being ‘encouraged’ that it is possible to ‘change sex or simply to be a member of the opposite sex… at an early age’.

Ms Forstater, who worked as a tax expert at the Centre for Global Development (CGD), posted a series of tweets in 2018 opposing UK Government proposals to reform the Gender Recognition Act to allow people to identify as the opposite sex.

She wrote: ‘What I am so surprised at is that smart people who I admire … are tying themselves in knots to avoid saying the truth that men cannot change into women’.

Ms Forstater said that ‘when men wear make-up, heels, dresses they don’t become women’ and took swipes at the idea of allowing transgender people into single sex spaces such as changing rooms and prisons. 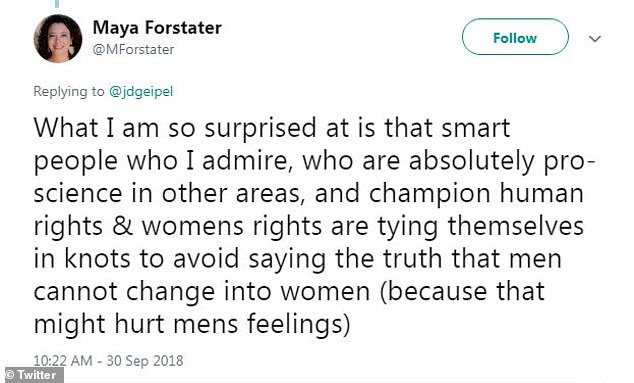 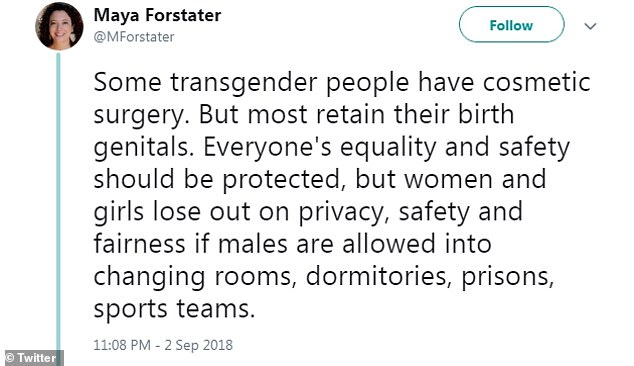 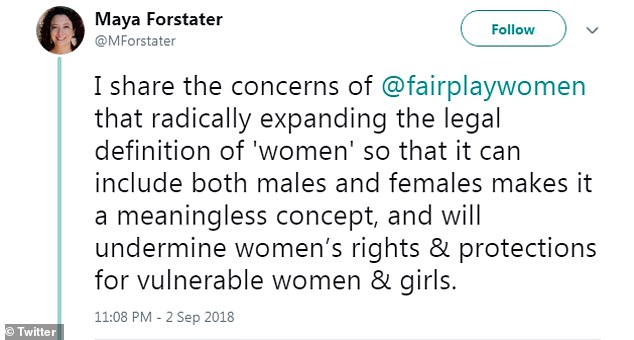 After her contract was not renewed she took her case to an employment tribunal on the grounds that her dismissal constituted discrimination against her beliefs – which should claimed she be protected under the 2010 Equality Act.

But employment judge James Tayler previously dismissed her claim saying her views are ‘absolutist in her view of sex’.

Mr Cooper said she claims: ‘Ignoring them or pretending they are not true is detrimental to an honest, just and fair society, particularly upholding the rights of women.

‘These beliefs do not involve any moral judgment and… do not deny the rights or status of trans people or their protection from discrimination.

‘I’m concerned that children and young people are being encouraged to make these decisions at an early age and are being led to believe it is possible to change sex or simply to be a member of the opposite sex.’ 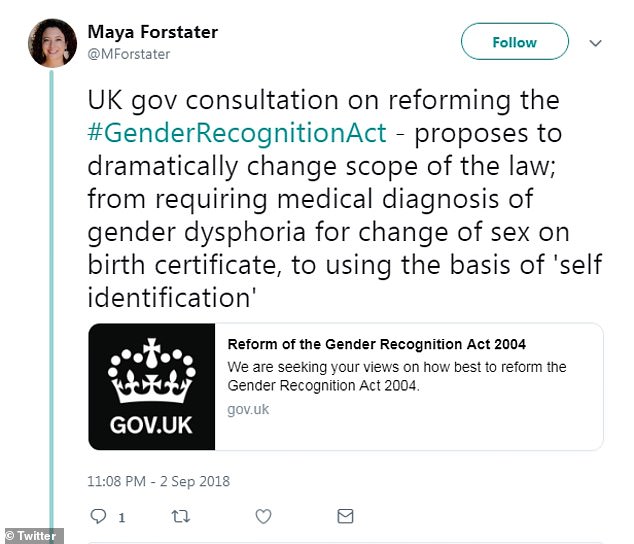 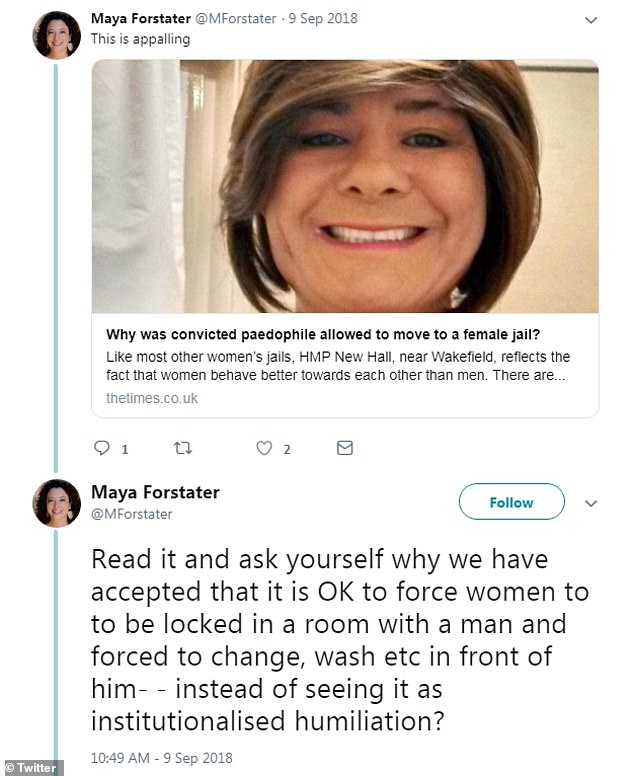 Mr Cooper added: ‘This is not a competition about who is treated worse or who is more offended by the other’s beliefs.

‘We say, applying the correct test, there can be no doubt that the claimant’s beliefs do meet the relevant threshold to be worthy of respect in a democratic society.

‘She accepts that [trans people] should be protected from discrimination.’

Mr Cooper said Ms Forstater ‘will use a person’s preferred pronouns’ in most social situations but ‘where it is relevant, she believes it is important to be able to refer to someone’s biological sex’.

The lawyer continued: ‘The claimant’s belief is that being transgender is a different category of thing from sex.

‘It is inherent in that belief that statements such as ‘woman means adult human female’ or ‘trans women are male’ are, for her, statements of neutral fact.’

In written submissions, Miss Forstater’s team said: ‘The label ‘Orwellian’ is sometimes applied too glibly, but here it is warranted.

‘Where the result is that important and widely-held beliefs about a matter of on-going cultural and political debate are deemed to be unsayable, something has plainly gone very wrong.’

Judge Tayler ruled against Ms Forstater in a 26-page judgment in 2019, in which he said her views did ‘not have the protected characteristic of philosophical belief’. 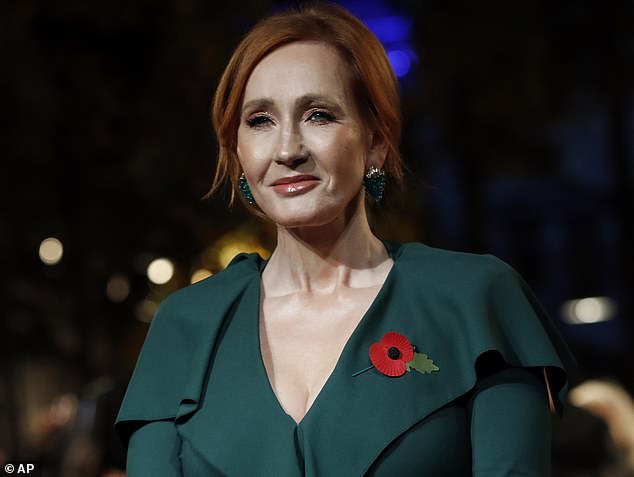 He concluded Ms Forstater was not entitled to ignore the legal rights of a transgender person and the ‘enormous pain that can be caused by misgendering a person’.

Following the ruling back in 2019, JK Rowling faced a huge backlash after tweeting her support for Miss Forstater.

The best-selling author wrote: ‘Live your best life in peace and security.. But force women out of their jobs for stating that sex is real #IStandWithMaya.’

The dispute was seen as a test case on whether a ‘gender critical’ view, a belief that there are only two biological sexes, is a protected ‘philosophical belief’ under the 2010 Equality Act.

Ms Forstater had argued ‘framing the question of transgender inclusion as an argument that male people should be allowed into women’s spaces discounts women’s rights to privacy and is fundamentally illiberal (it is like forcing Jewish people to eat pork)’.

In a statement released ahead of the appeal tribunal’s judgment, Amanda Glassman, the chief executive officer of CGD Europe and executive vice president of CGD, said: ‘Our view is that Judge Tayler was correct when he ruled that the claimant’s beliefs denied trans persons their legal rights while also causing them personal pain.

‘We are hopeful that the Employment Appeal Tribunal will uphold the original ruling and look forward to moving on to the next case.’