A house builder is checking wardrobe mirrors at a new development after one fell and ‘exploded’ near to where a baby normally sleeps.

Jennie and Joe Adams claim full-length wardrobe mirrors were ‘stuck on with tape’ at their new home in Gorebridge, Midlothian.

As a result, they say one of the mirrors fell off and crashed to the floor with a massive bang, leaving shards of glass everywhere. 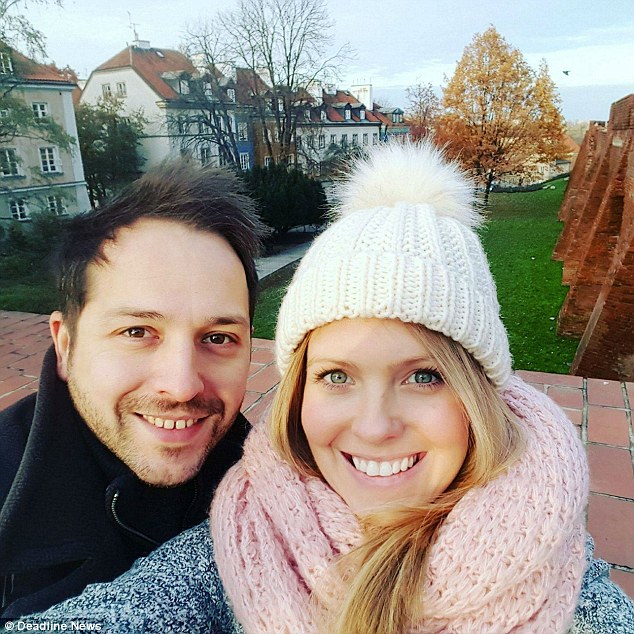 Jennie and Joe Adams, pictured, have demanded action after a large mirror on the fitted wardrobe of their new home fell and smashed over their bed on the exact spot their daughter spends part of her day

According to Ms Adams, the mirror smashed into pieces and could have injured her daughter

The couple were downstairs when the disaster happened, playing with their four-month-old daughter, and thought the ceiling had fallen in.

When they went upstairs, they found debris all over the same bed where their daughter spends part of her day.

Taylor Wimpey, who charge up to £297,000 for homes at Harvieston Park, have apologised to the couple and said they will check all other similar mirrors at the development.

The development, which was approved in 2015, provided 190 homes and was partially funded by a £1.85m Scottish Government grant.

Ms Adams took to Facebook to warn others, writing on Wednesday: ‘Angry doesn’t even come close to how we are feeling about Taylor Wimpey.

‘We moved into our new house less than three months ago and last night one of the mirrors on our fitted wardrobes fell off and smashed all over our floor and bed.

‘The section of our bed it smashed over is where I place our four-month-old daughter on a daily basis. I can’t even comprehend how horrifically this could’ve turned out.

‘Joe emailed Taylor Wimpey after it happened and their response was “Please accept our apologies for the inconvenience and dissatisfaction that this has caused.”

‘Our daughter could’ve been seriously injured if not worse. If it had happened at night then we would’ve been covered in shards of glass.

‘Today we found out that the mirrors hadn’t even been glued on. They were simply stuck on with a bit of tape. And we had five others still up.

‘Please share this so we can make others aware and stop it happening again.’

The photographs show a long thin mirror smashed into pieces on the ground and all over the couple’s bed.

On social media, Emma Elizabeth Ciarrocca said: ‘I’m so relieved that the wee one wasn’t there when that happened and can’t believe how stupid TW [Taylor Wimpey] are. What a shoddy job and response.’

Asif Awan wrote: ‘Thank god no one, especially the baby, was hurt. They should send an independent surveyor to check over any other health and safety related issues.’

Wiebke Burnett added: ‘What an absolute nightmare to happen in your own home, or anywhere. But it’s a brand new home, so you have a reasonable expectation that this doesn’t happen, and if it does, that it and you are taken seriously.’ 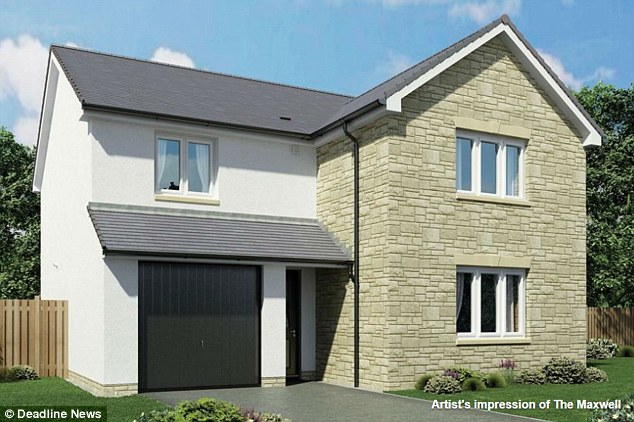 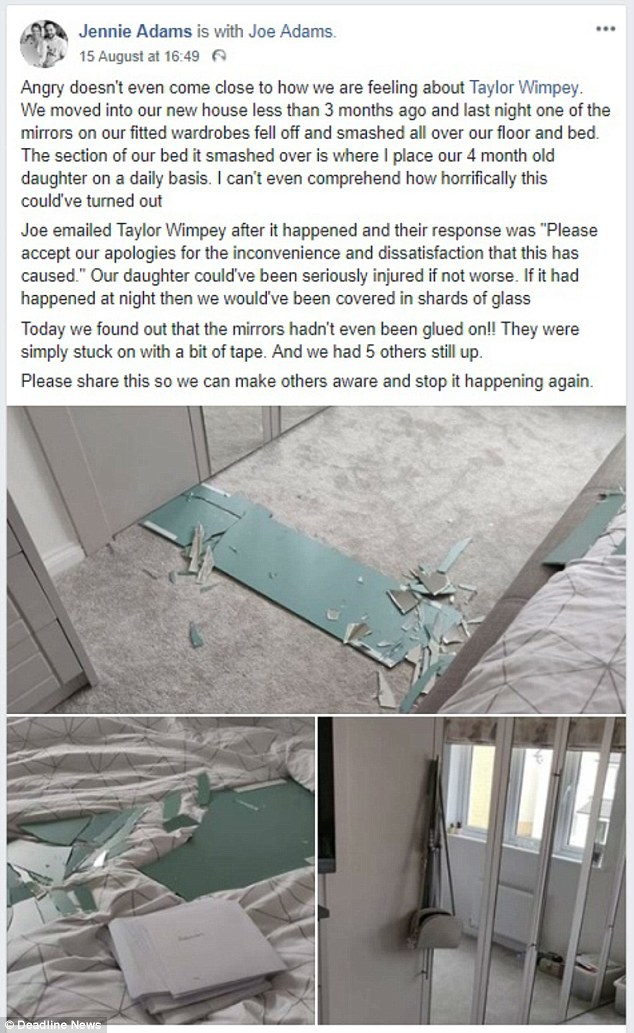 While Laura Barnet said simply: ‘So awful. Just glad you are all okay.’

Speaking today Ms Adams, a social media & outreach manager, said: ‘Our bedroom is above the living room and we were sitting downstairs when heard this massive crash and bang. We thought that the ceiling had collapsed and Joe ran upstairs to investigate.

‘It was all over the bed, it really shook me up. We lay our daughter there throughout the day and it had just exploded and shattered.

‘I understand that there can be snagging issues, but it has been a nightmare. We’ve had workmen in and out since we moved in in May.’

A spokeswoman for Taylor Wimpey East Scotland said: ‘We are very sorry to learn about the situation at our Harvieston Park development, and we have carried out a full investigation in conjunction with our wardrobe door installer to understand the circumstances.

‘We have apologised to the family involved and we have offered our assistance to resolve this matter for them.

‘As an additional precaution, and to provide comfort to other homeowners living at the development, we will conduct additional checks on similarly fitted mirrored wardrobe doors that could be affected to make sure this issue does not happen again.’