A Kansas middle school teacher who was suspended from work for refusing to use a student’s preferred first name and gender pronouns because it went against her Christian beliefs is suing the school district.

Fort Riley Middle School math teacher Pamela Ricard said in a federal lawsuit filed last week that the Geary County School District violated her constitutional rights and did not accommodate her ‘sincere religious beliefs consistent with the traditional Christian and biblical understanding of the human person and biological sex’ when it placed her on leave for three days.

Attorney Mark Edwards said the district would have no comment on the lawsuit. The school is located in Fort Riley, a US Army base that’ is 130 miles west of Kansas City.

Ricard, 58, who has taught at the school since 2005, was reprimanded and suspended in April 2021 for addressing a ‘biologically female’ student as ‘miss’ to avoid using the student’s preferred first name after Picard was told that the student used he/him pronouns. 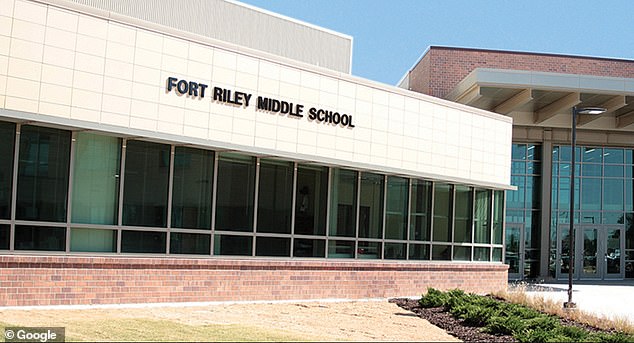 Pamela Ricard, a math teacher at Fort Riley Middle School in Kansas (pictured), has filed a federal lawsuit, claiming that her constitutional rights have been violated because she refused to use a student’s preferred pronouns

Ricard believed addressing the student as ‘Miss (legal/enrolled last name)’ respected the student while also upholding Ricard’s religious convictions, according to the lawsuit.

The suit says Ricard believes that God assigns gender at birth and any policy requiring her to use language that is different from the student’s biological sex ‘actively violates Ms. Ricard’s religious beliefs.’

Neither the school nor the district had a formal policy on gender pronouns at the time. Ricard was suspended under the district’s bullying and diversity and inclusion policies.

A week after her suspension, the middle school principal sent staff new training and protocol materials requiring them to use students’ preferred names and pronouns.

During an appeal of her discipline, Ricard asked three times to be given a religious exemption to the policy, but her beliefs were never accommodated, according to the lawsuit.

The school district’s Board of Education in September approved a policy requiring that students’ preferred names and pronouns be used. At that meeting, the board also voted to deny Ricard’s request for a religious accommodation.

The district is threatening to discipline Ricard again, and even possibly fire her, if she refuses to use students’ preferred pronouns, or chooses to use gender-neutral language, according to the lawsuit.

‘I continue to enjoy teaching my students day in and day out, but the stigma of being officially labeled a “bully” simply for using a student’s enrolled last name has been disheartening,’ Ricard told CNN. ‘I love all my students, but I shouldn’t be forced to contradict my core beliefs in order to teach math in a public school.’

Ricard is suing the school board, as well as Superintendent Reginald Eggleston and Fort Riley Middle School principal Kathleen Brennan. The lawsuit alleges the district’s actions violated Ricard’s constitutional rights to free speech, free exercise of her religion, due process and equal protection under the law.

‘Our suit contends that schools cannot force teachers to promote novel views about gender fluidity and ever-expanding pronoun categories without regard to the First Amendment or due process,’ said Josh Ney, one of her attorneys. ‘Throughout her career, Ms. Ricard has consistently treated every student in her classroom with respect and dignity; unfortunately, the school district has not treated Ms. Ricard with similar good faith or basic fairness.’

Ricard is asking to have her disciplinary record cleared and is seeking ‘nominal damages.’