The man who stabbed six people in a terrorist attack in an Auckland shopping mall has been named as Ahamed Aathill Mohammad Samsudeen after a suppression order was lifted on Saturday night.

The shocking broad daylight attack has raised questions about the effectiveness of the nation’s counter-terrorism laws, which were due to be overhauled in the wake of the 2019 Christchurch mosque killings by Australian far-right terrorist Brenton Tarrant. 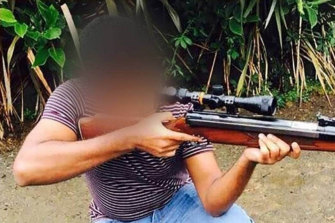 The man who stabbed six people before police shot him dead at Countdown New Lynn had extreme views and was found with Islamic State propaganda.Credit:Stuff.co.NZ

Samsudeen, an Islamic State sympathiser with a history of violence and extremism, was being watched by New Zealand police 24 hours a day after the nation’s High Court ruled that he could not be jailed for planning an earlier, foiled terrorist attack.

Although Samsudeen’s name has been suppressed since 2018, he had become New Zealand’s worst-kept secret, his activities closely tracked by counter-terrorism officials, local journalists and politicians.

Prime Minister Jacinda Ardern revealed the Sri Lankan national arrived in New Zealand in 2011 as a 22-year-old, travelling on a student visa.

He first came to the attention of the police in 2016 after posting extremist material and videos inspired by the wave of terrorist attacks across Europe in 2016, when Islamic State was linked to at least 10 bombings, stabbings and assaults using vehicles. 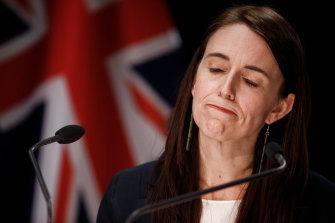 Samsudeen was arrested at Auckland airport in May 2017, under the suspicion he was headed to Syria, and was first sentenced to 12 months’ supervision in September 2018.

Charged several times with possession of knives and restricted publications, the man was closely watched by New Zealand’s counter-terrorism authorities for several years.

On remand in May on counts of buying knives and possessing objectionable material, Samsudeen assaulted corrections officers, Ardern said.

She revealed that on the same day he grabbed a knife from a supermarket shelf and started stabbing fellow customers, New Zealand’s Justice Minister was rushing to amend the nation’s counter-terrorism laws to allow them to detain extremists before attacks were carried out.

Samsudeen was being shadowed by the police when he went to the New Lynn shopping mall in Auckland on Friday afternoon. He went shopping for 10 minutes in a supermarket before grabbing a knife from a shelf and attacking people around him, stabbing seven people, three of whom were critically injured.

CCTV suggested police took 69 seconds to respond after the attack began. Police shot him dead as he ran out of the supermarket still wielding the knife.

In a press conference, Ardern said that even if the laws had been amended in time, they could not have applied retrospectively.

“We wanted to make this rule change, but it is still really speculative to say that even that would have made a difference here,” she said.

“This individual was kept in prison as long as we could. He was charged with possessing objectionable materials, and for possessing a knife.” 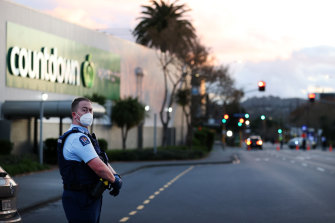 Police guard the area around the New Lynn mall where the terror attack took place.Credit:Getty

Ardern said she wanted changes made to terrorist suppression laws by the end of the month.

“We must be willing to make the changes that we know may not have changed history, but could change the future,” she said.

Ardern revealed that the courts rejected an application from the government to monitor Samsudeen’s movements through GPS tracking, so when he was released from remand in July, a dedicated police team started round-the-clock surveillance.

The Prime Minister said she was personally updated on the case in late July, and by August 9 had met with officials to discuss “further options to try and reduce the risk that this person posed to the community”.

“In late August, officials including the commissioner of police raised the possibility of expediting the amendments to the counter-terrorism legislation,” she said.

“Within 48 hours of these discussions, the Minister of Justice contacted the chair of the select committee with the intention of speeding that law change up. That was yesterday, the same day the attack happened.

“As you can see, agencies used every tool available to protect innocent people from this individual. Every legal avenue was tried.”

She said she could not explain why a known terrorist threat was not deported until suppression orders were lifted.

Ardern earlier had said that while she was working with the courts to release the Samsudeen’s name, she was not intending to name him herself.

“No terrorist, whether alive or deceased, deserves their name to be shared for the infamy they were seeking,” she said.

On Friday night, High Court judge Justice Edwin Wylie had ruled the man can be named, but delayed publication for 24 hours to give his family time to seek suppression if they wish.

Justice Wylie had given the family 24 hours to file opposition to the suppression order, which was due to expire at 11pm on Saturday (9pm AEST).

Samsudeen was granted name suppression back in 2018 before he was found guilty of possessing Islamic State propaganda and refusing to comply with a police search.

The reason for that suppression cannot be reported.

The trial judge, Justice Sally Fitzgerald, found he had an “operative interest” in the terrorist organisation, and a report writer concluded he “had the means and motivation to commit violence in the community”.

The Crown had sought to charge him under the Terrorism Suppression Act, but the application was declined as the law does not cover plans for attacks.

He was instead sentenced to one year’s supervision for possession of extremist material.

Samsudeen was facing further charges of assault and injuring with intent to injure after attacking prison guards while he was on remand.

He had been ordered to undergo a psychological assessment after being sentenced for possessing Islamic State propaganda but no such assessment happened.

Samsudeen was also banned from possessing devices capable of accessing the internet and was told to surrender his social media accounts.

His social media accounts had to be disclosed and accessible, if requested.

He was also directed to live at a West Auckland mosque and was not allowed to move from that address without approval.