‘Patients go in and only come out in a body bag’: El Paso nurse describes ‘The Pit’ where COVID patients get just three rounds of CPR before being left to die as Texas enlists inmates to move bodies at morgue for $2 an hour

A nurse in El Paso, Texas, has told of the ‘horrific’ conditions at hospitals in the city as the state grapples with one of the worst surges in coronavirus in the United States, and prison inmates are brought in to help carry the dead in morgues.

Registered nurse Lawanna Rivers took to Facebook to describe her time at the University Medical Center in El Paso where she claims patients were taken to a room called The Pit and given just three rounds of CPR before being pronounced dead.

In a video posted to Facebook November 7 she said: ‘My first day at orientation, I was told that whatever patients go into the pit, they only come out in a body bag. I saw a lot of people die that I felt like shouldn’t have died.

‘This hospital’s policy was they only get three rounds of CPR which was only six minutes, this out of all the codes we had, there is not a single patient that made it.’

The virus that is surging throughout the U.S. has been unsparing across Texas where the latest figures show more than one million people have tested positive for the virus; more than 20,000 people have died across the state as of Monday.

Last week daily deaths were increasing at a slightly higher rate with 15 additional deaths reported Saturday; 16 on Friday and 29 deaths reported Thursday. As of November 6 the death toll was 657, indicating the rise since then.

An El Paso County Sheriff’s Office spokesman confirmed to The Texas Tribune that up to eight inmates have volunteered to carry out the work for $2 an hour.  The inmates are not normally paid for their community work but are said to have ‘refused to work unless they were compensated’ for this task, the spokesperson confirmed. 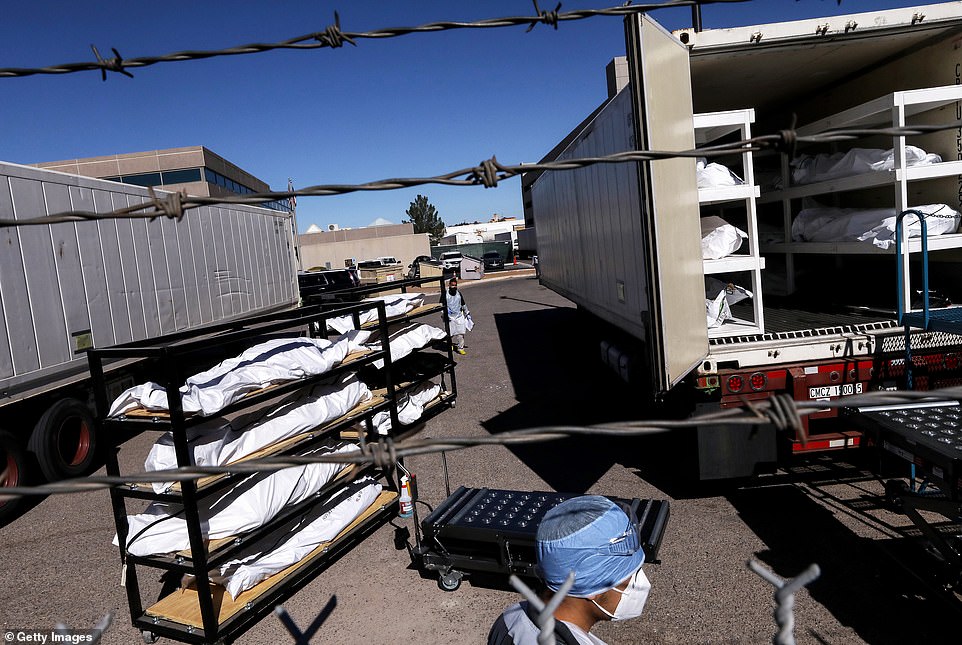 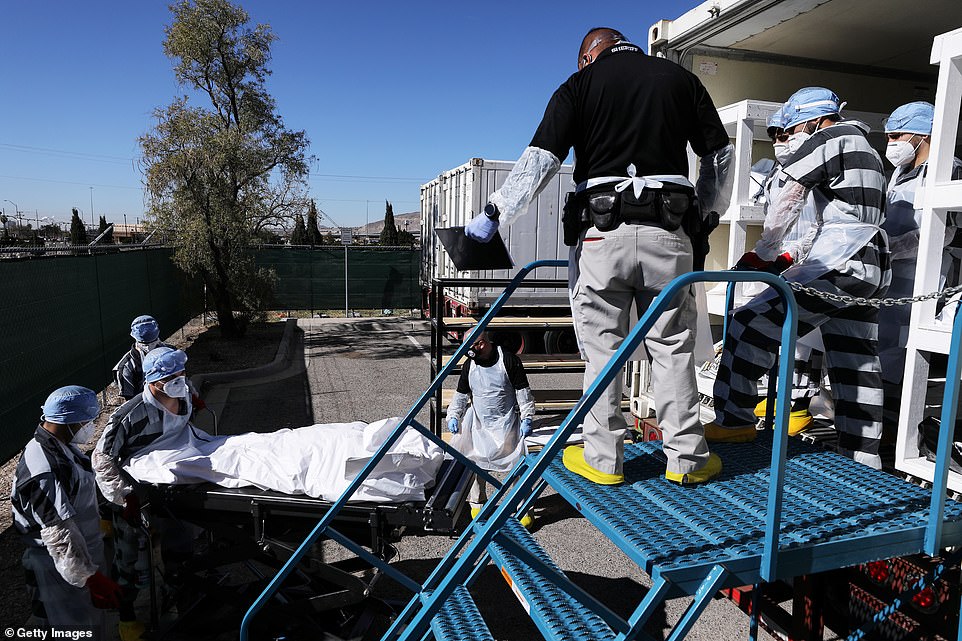 The inmates, who are also known as trustees, are volunteering for the work and earn $2 per hour amid a surge of COVID-19 cases in El Paso. They are pictured Monday 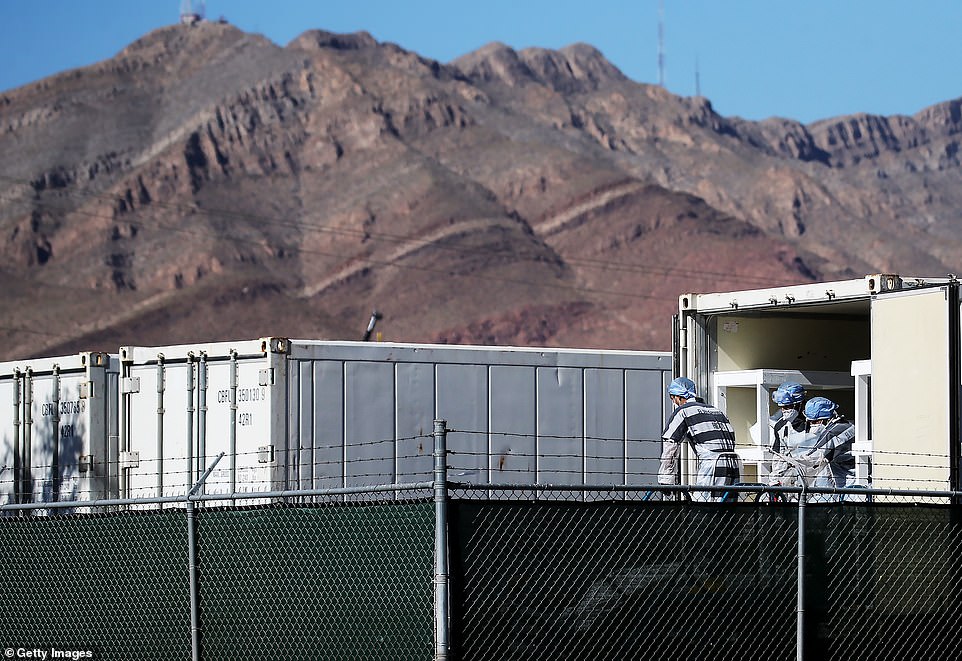 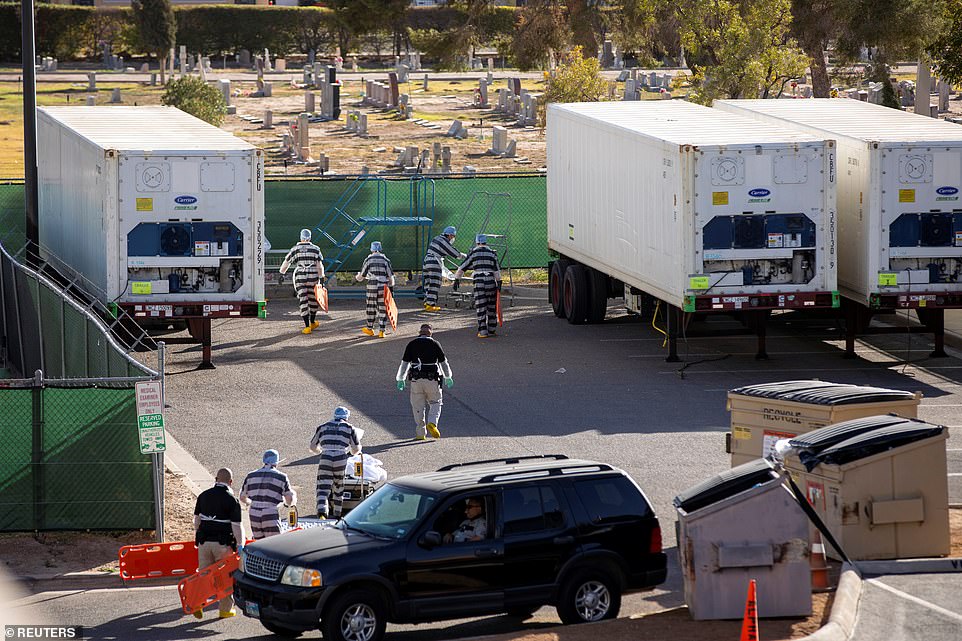 El Paso County detention inmates help move bodies to refrigerated trailers outside the Medical Examiner’s Office which is located next to a cemetary in El Paso, Texas on Saturday amid a surge of COVID-19 deaths 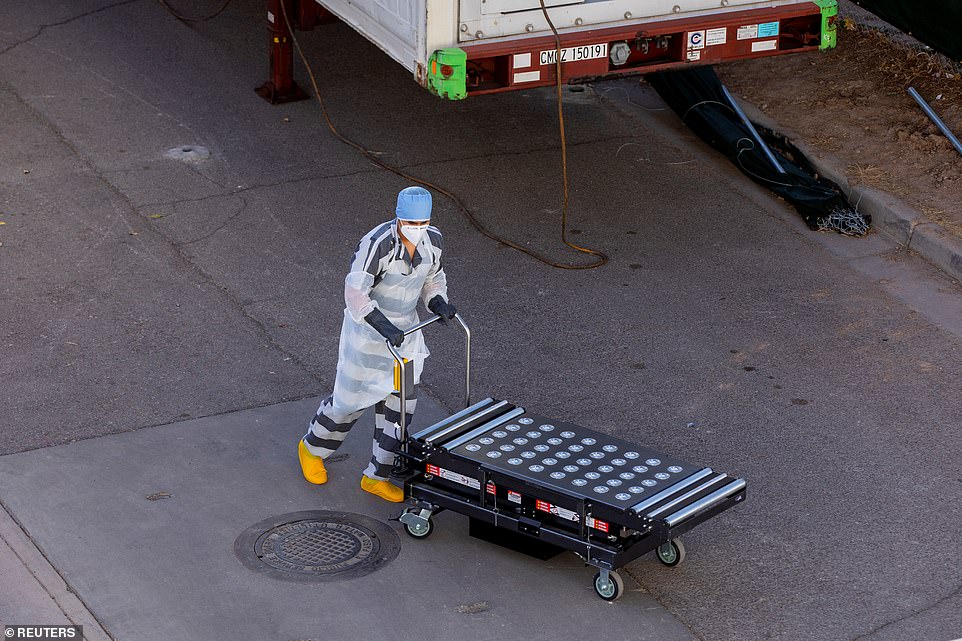 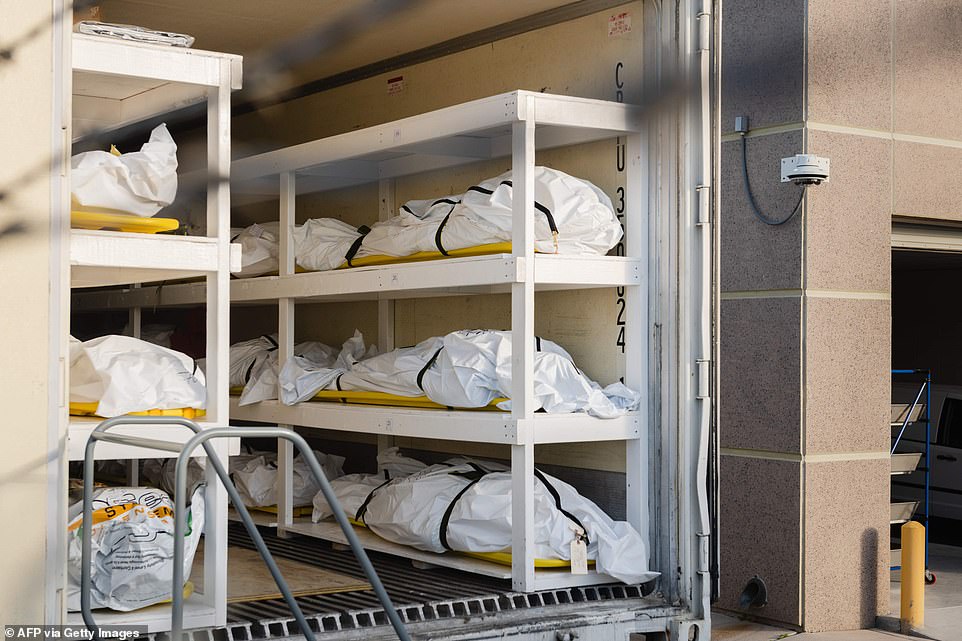 El Paso County, Texas, has been forced to deploy mobile morgues and enlist the help of inmates to move the bodies of COVID-19 victims into these cold storage facilities 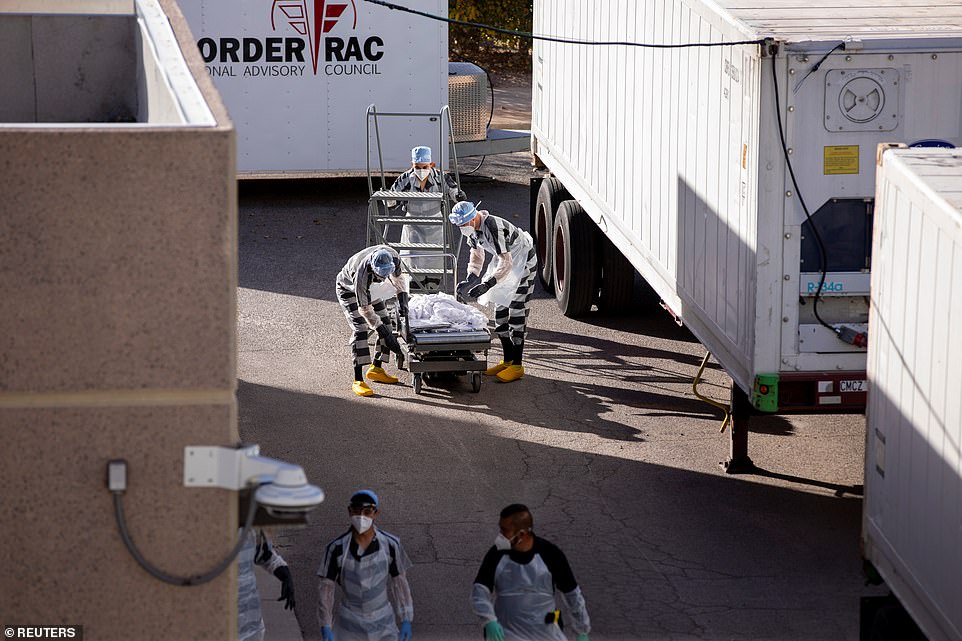 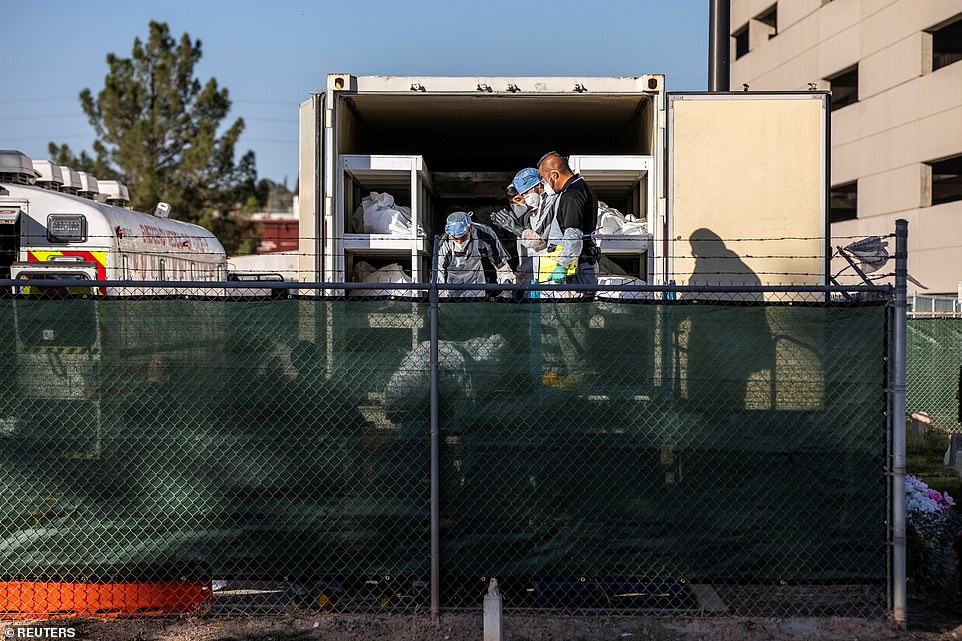 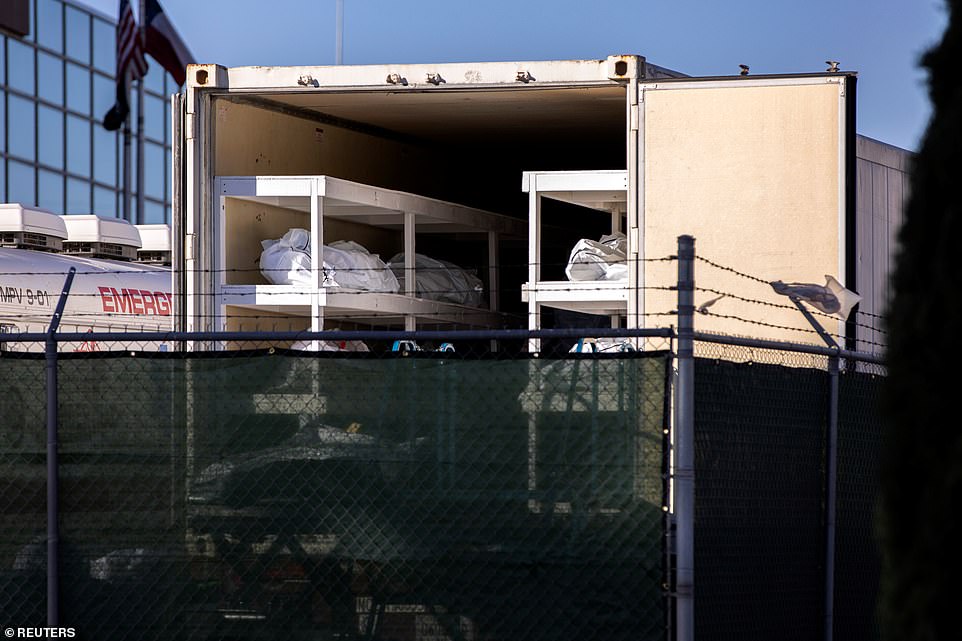 Rivers added: ‘The morgue was so full of bodies that they had ran out of room, so once the doors opened to the pit they come wheeling in a body already in a bag.

‘[They] lined them up with the rest of our alive patients, because they had to store the body in there, because the morgue was out of room. They’ve had to bring in freezer trucks because there’s so many bodies.

‘The facility I’m at has surpassed the one I was at in New York. I have never experienced, and have no words, for what I just experienced in El Paso, Texas.’

Across the US more than 11 million people have tested positive; 246,854 Americans have died.

In total, nearly 75,000 people in El Paso County have been infected, representing about nine percent of the entire population.

In Houston, hospitalizations nearly doubled this week compared with last month for the virus. A total of 2,351 people have died from the virus in Harris County; more than 174,000 people have tested positive.

And in Dallas health officials on Sunday reported 1,458 additional cases and one additional death bringing the total number of people infected there to more than 100,000 cases and 1,142 confirmed deaths.

Texas has recorded the second-highest death count overall in the U.S., trailing only New York, according to researchers from Johns Hopkins University. It’s the 22nd-highest per capita at 69.7 deaths per 100,000 people.

Despite that, many Texans are said to be experiencing ‘quarantine fatigue’.

Dr. Erin Carlson, an associate clinical professor in the College of Nursing and Health Innovation at the University of Texas at Arlington, told The LA Times: ‘People have quarantine fatigue. They’re tired of it. They want to go over to their friend’s house and have poker night just like they used to.

‘Pretty much any contact tracer you talk to, they’re seeing small gatherings and that’s driving the rates up. They’re tired and they want to see their families, so they’re going ahead to the birthday parties.’

Dr. Peter Hotez, dean of Baylor College of Medicine’s National School of Tropical Medicine, added: ‘The country is in free fall. It’s in disaster mode. It’s really scary in terms of the surges on the ICUs, the hospital staff getting exhausted, and you know mortality is just going to shoot up. These are lives that don’t have to be lost.’

The use of inmates to help carry bodies is a temporary measure until the National Guard can take over the task, WWJ reports. The inmates are part of El Paso County Sheriff’s Office’s ‘trustee program’, and are low-level offenders.

Judge Ricardo Samaniego said that using prisoners to move the bodies is a last resort.

‘If there’s no personnel, no one to help out, and there’s volunteers, even if they are inmates, then that’s what we’re left with’, he told KFOX14. ‘It was just a temporary focus, and we’re waiting for the Texas National Guard to help us out with that.’

Last week officials in El Paso announced plans to add four additional morgue trailers, bringing the total number there to 10 as of Wednesday. 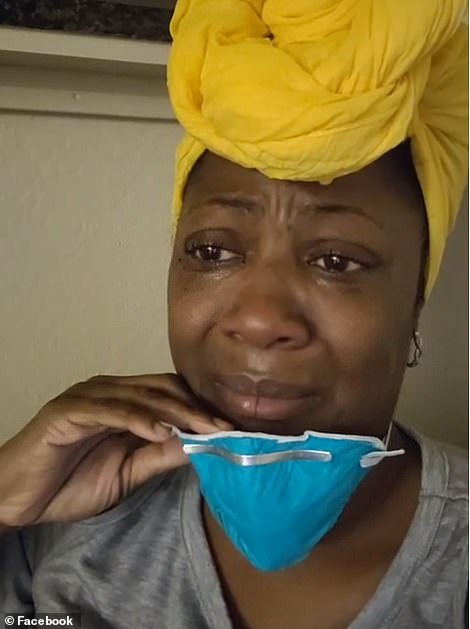 For nurse Rivers, who described leaving patients in the The Pit, she said ‘to know that the only way that those patients was coming out of that pit was in a body bag’ left her feeling ‘not ok from an emotional mental standpoint.’

‘They pulled out all the stops for that woman — there was nothing that they didn’t do for that woman. And guess what? She was the one patient that made it out of that ICU alive.’

A spokesman for the University Medical Center told KVIA: ‘After watching the video, while we cannot fully verify the events expressed, we empathize and sympathize with the difficult, physical and emotional toll that this pandemic takes on thousands of healthcare workers here and throughout our country.

‘This particular travel nurse was at UMC briefly to help El Paso confront the surge of Covid-19 patients.’

So far, Texas leaders have given no indication of forthcoming restrictions to keep people from gathering and spreading the virus. Instead, Republican Gov. Greg Abbott in recent days has been emphasizing that new therapeutics and vaccines are expected to become available soon.

On Friday the Eighth Court of Appeals in El Paso ruled against an order closing nonessential businesses including gyms and salons, sending the case back to a district judge who had upheld it with instructions to halt the shutdown.

State Attorney General Ken Paxton sued to overturn the order County Judge Ricardo Samaniego issued in October, despite a surge that has overwhelmed hospitals and funeral homes in the border city of El Paso.

Samaniego said he is unhappy with a state appeals court ruling overturning his order closing nonessential businesses to slow the spread of the coronavirus, but he won’t appeal it.

He said he would work with business leaders and health officials to develop ways to protect public health and the economy. A previous order limiting nonessential businesses to 50% capacity, closing bars and dine-in restaurant services at 9 p.m. limiting social gatherings to no more than 10 people and a mask mandate remain in place, he said. 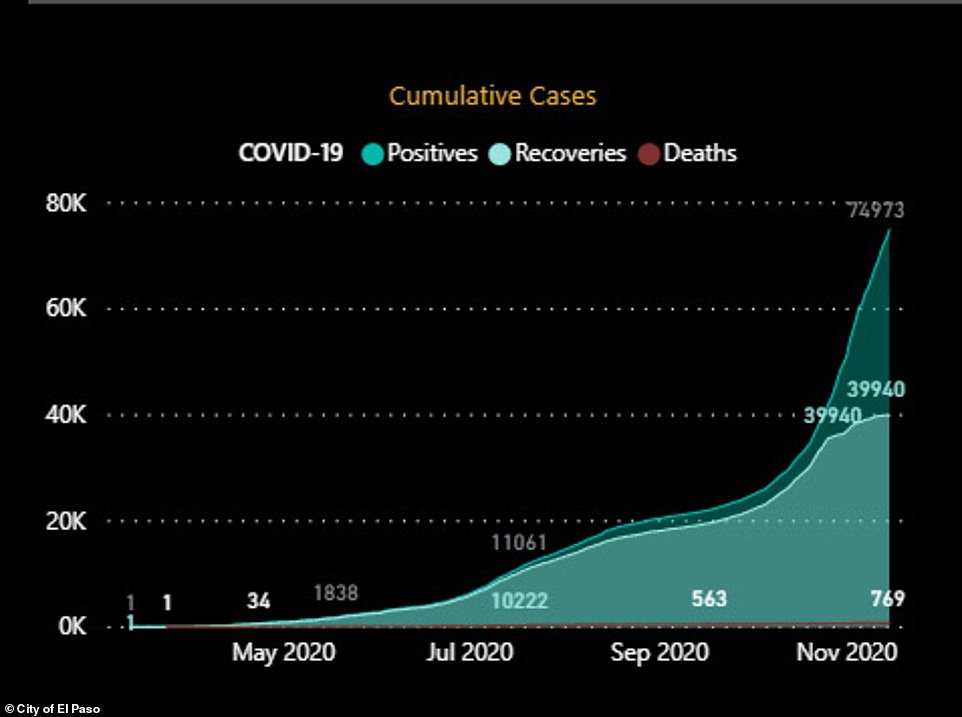 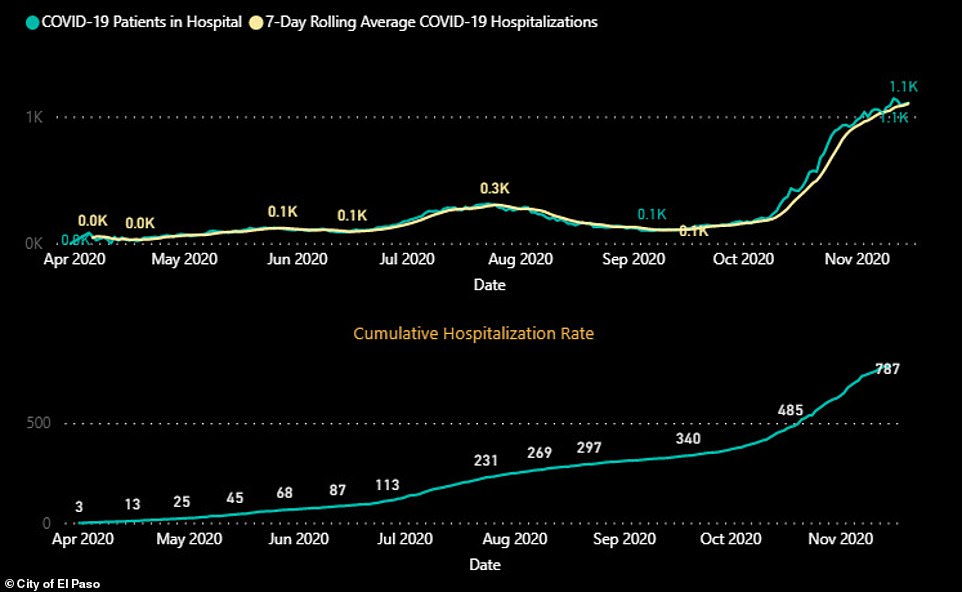 COVID-19 hospitalization rates for Texas states as a whole

COVID-19 positive case rates for Texas states as a whole

COVID-19 death toll for Texas states as a whole

Texas and California have reported the highest number of COVID-19 infections across the United States, together accounting for about 2.1 million cases or about 19 per cent of the total cases since the pandemic began, according to Reuters analysis.

Texas logged more than 9,100 new cases Sunday of the coronavirus that causes COVID-19, according to statistics compiled by Johns Hopkins University.

The 9,113 new cases boosted to more than 1.052 million the number of Texas cases since the pandemic struck in March, the university reported.

On Friday the state surpassed 7,000 hospitalized patients for the first time since early August, just days after becoming America’s first state to surpass 1 million confirmed cases of the coronavirus.

The Texas Department of State Health Services said that there were 7,083 people hospitalized in the state with COVID-19 as cases continue to rise.

During the summer, people with COVID-19 overwhelmed hospitals in Houston and in the Rio Grande Valley, along the border with Mexico. But in the fall case numbers dipped, and Abbott began relaxing some coronavirus restrictions, allowing restaurants and gyms to let more people inside. He also let county leaders decide if they wanted to reopen bars at 50 percent capacity.

Since then, the virus has spread.

Over the past two weeks, the rolling average number of daily new cases has increased by 3,430.4, an increase of 53.6 percent.

Texas now ranks 31st in the country for new cases per capita, with 428.3 new cases per 100,000 people over the past two weeks. One in every 417 people in Texas tested positive in the past week. 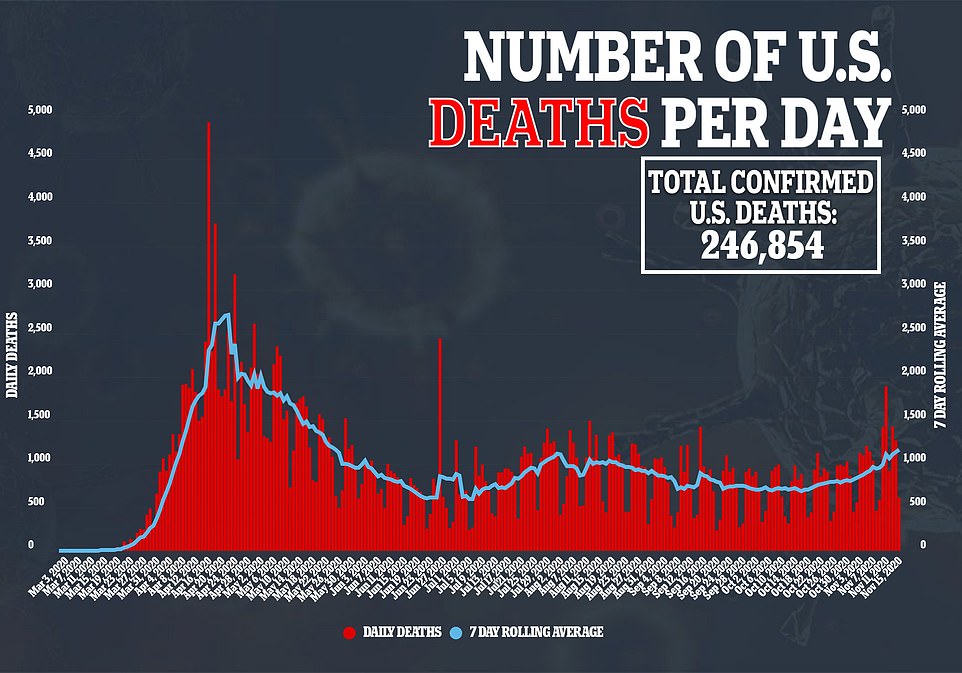 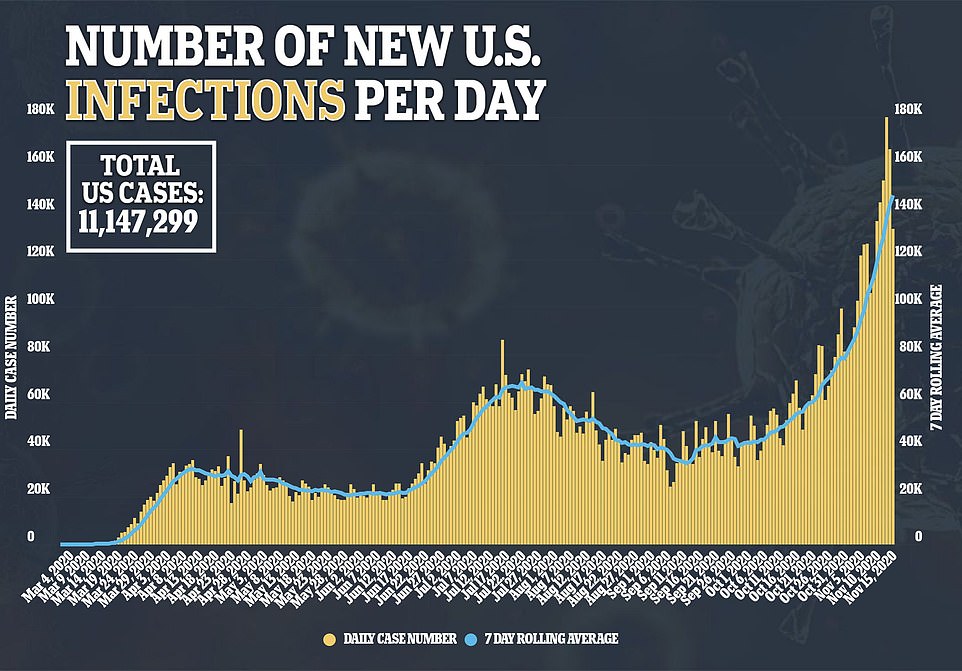 Across the United State, the number of coronavirus cases crossed the 11-million mark on Sunday reaching yet another grim milestone, as the third wave of COVID-19 infections surged across the country.

The latest 7-day average, shows the United States is reporting more than 144,000 daily cases and 1,120 daily deaths, the highest for any country in the world.

Moderna said Monday its COVID-19 vaccine is proving to be highly effective in a major trial.

The company said its vaccine appears to be 94.5 per cent effective, according to preliminary data from Moderna’s ongoing study. A week ago, competitor Pfizer Inc. announced its own COVID-19 vaccine appeared similarly effective — news that puts both companies on track to seek permission within weeks for emergency use in the U.S. 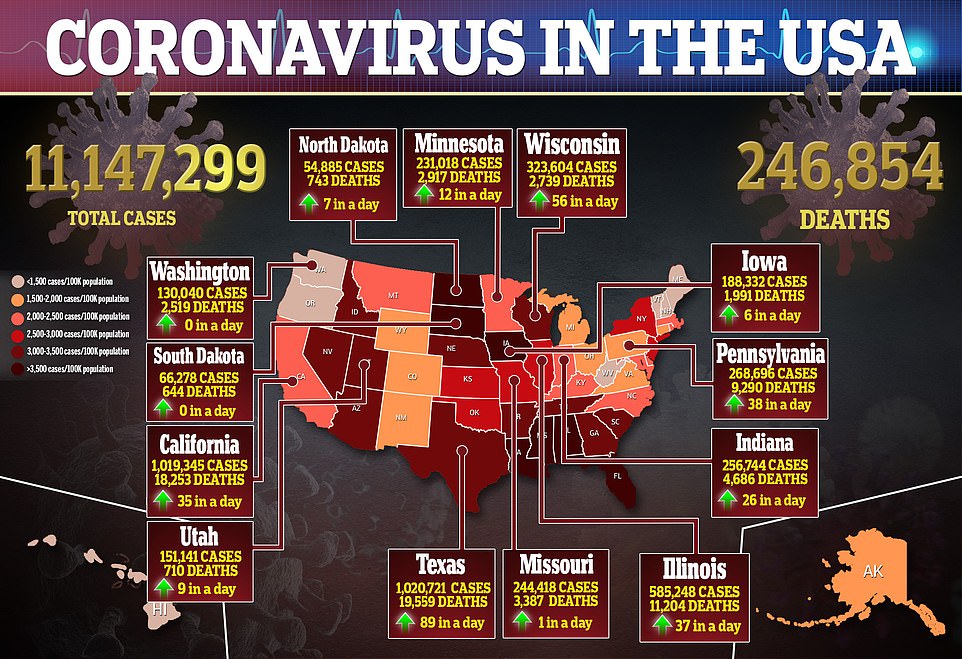