Bangkok: An elaborate funeral began on Saturday for Thai billionaire and Leicester City owner Vichai Srivaddhanaprabha, who died last week when his helicopter crashed in a parking lot next to the English Premier League club's stadium.

The royally sponsored funeral was being held at a Bangkok temple and its guests included top government officials, businessmen and other public figures. The first ceremony began on Saturday, with other ceremonies scheduled through to November 9.

"It's a very difficult time for his family and I'm here to show support," said Kiattisak Senamuang, a former Thai national soccer team coach and player who noted that Vichai was always supportive of soccer projects in Thailand. "May Vichai rest in peace."

The grounds of Wat Thepsirin were heavily guarded by scores of security officers. White sheets were lowered to block outsiders and media from viewing the proceedings. However, the chanting of monks, amplified by loud speakers, could be heard resonating around the temple's grounds.

Leicester City's players plan to travel to Bangkok to attend Vichai's funeral after their match with Cardiff City on Saturday. 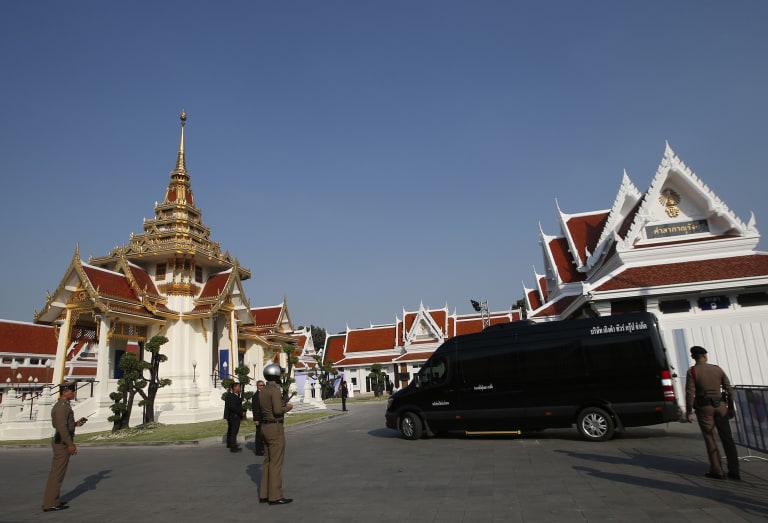 A hearse carrying the body of the Thai billionaire arrives at the temple. Credit:AP

Vichai was killed in the October 27 crash, which occurred about an hour after a Leicester City match.

The Thai billionaire oversaw one of the greatest underdog successes in sports when his 5,000-1 outsiders won the English Premier League title in 2016.

In an era of often-absentee foreign owners in the Premier League, Vichai also broke the mold by forging close ties with supporters and the local community.

The business world remembers Vichai as the retail entrepreneur who grew Thailand's massive King Power duty-free chain. Today the King Power empire is worth 3.8 billion pounds ($4.88 billion), according to Forbes, with Vichai having been the fifth-richest person in Thailand.

A devout Buddhist who had monks bless his team's King Power Stadium regularly for good luck, Vichai and his wife, Aimon Srivaddhanaprabha, had four children.

He was born Vichai Raksriaksorn, but in 2012, the king of Thailand recognised his achievements by bestowing on his family their new surname, which means "light of progressive glory."