Thank you SIX MILLION times: That’s how much our amazing readers and others have raised through the Mail Force Ukraine refugees appeal in less than two weeks

Cheques from kind-hearted Mail readers have taken the total raised in our Ukraine fundraising appeal to more than £6million in less than two weeks.

The amount contained in the torrent of envelopes arriving in the daily post has burst through the £2.5million barrier, accompanied by letters of compassion for refugees and rage at Vladimir Putin.

Horrified at the tragedy unfolding in Ukraine, some people have dug exceptionally deep, writing cheques for thousands of pounds, while others without so much to give have sacrificed small luxuries to help. 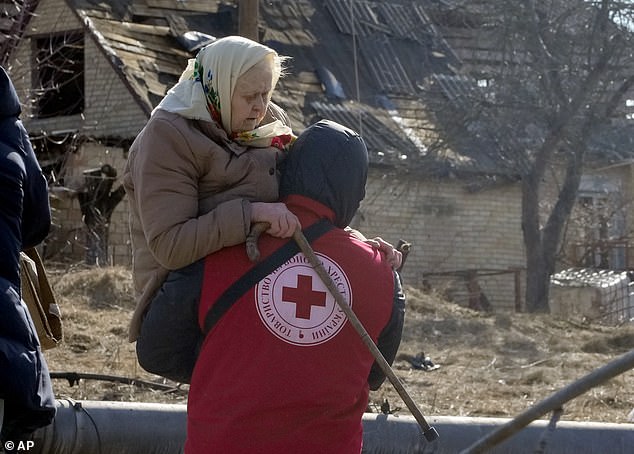 The amount contained in the torrent of envelopes arriving in the daily post has burst through the £2.5million barrier, accompanied by letters of compassion for refugees and rage at Vladimir Putin. Pictured: A Red Cross worker helps an elderly woman evacuate in Irpin today

Richard Halliday, of south-east London, sent £20 with a handwritten note included saying: ‘I have very little money. Every Saturday night, I treat myself to a nice steak and chips, but I will replace this meal with baked beans on toast.’

An anonymous reader accompanied their cheque with a handwritten note that read: ‘At the turn of the 20th century my grandfather left Ukraine to escape persecution from the Tsarist regime.

‘The British took him in and gave him a safe new life, but 120 years on nothing has changed. The Russian regime is still persecuting innocent people. This cheque is in memory of my grandfather.’

The Kilmarnock Burns Club sent £50, with club treasurer John McCracken saying simply that its members had felt the need to contribute towards ending ‘this humanitarian disaster’. 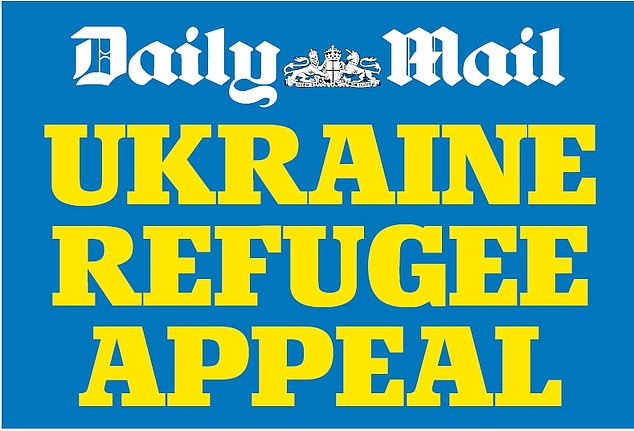 The amount contained in the torrent of envelopes arriving in the daily post has burst through the £2.5million barrier, accompanied by letters of compassion for refugees and rage at Vladimir Putin

Twice-married widow Doris Hanczaryk sent £20 in memory of her late husbands, both of whom were Ukrainian.

The 87-year-old, nee Wright, from Hemel Hempstead, Hertfordshire, said: ‘I am English-born and still feel English but in many ways I feel Ukrainian.

‘I miss my menfolk so much – as many refugees will miss theirs in this terrible war. Both of my husbands fought to push Russia out of the Ukraine in the Second World War.

‘These people need all the help we can send for them.’

A farmer who spoke to the Mail on the phone said: ‘We have had Ukrainians on our farm in Carmarthenshire. They are honest hardworking people.

‘I feel so desperately sorry for them. I feel I had to give to the Daily Mail appeal.

‘Something must be done to stop this evil dictator. It cannot go on.’

And Brenda Seaton, from Exmouth, Devon, gave £100 and said: ‘I have cried so many tears watching the TV coverage and I hope that my small donation will help a little.

‘My heart goes out to the brave men and women and I hugely applaud their wonderful leader.’

Animal campaigner Irene Davies sent £20 and saluted the ‘wonderful and brave people’ of Ukraine, adding: ‘They also saved their pets and didn’t think just of themselves.’

The Mail Force charity has also received generous donations via bank transfer and on the telephone, and through the Just Giving fundraising website.

At the request of Lord and Lady Rothermere, the Mail’s parent company DMGT has donated £500,000.

Mail Force does not take a penny in administration costs and is passing the money to good causes helping refugees on the ground in Ukraine and the countries they are fleeing to.

Some four million are running away, making this the worst refugee crisis in Europe since the Second World War.

The town of Irpin is – or, rather, was – a residential satellite on the edge of Kyiv. Think of Borehamwood or Orpington in the context of London, or Sale outside Manchester; Morley in relation to Leeds. Not a military target, but now being targeted all the same by artillery and sniper fire.

Tens of thousands of its civilian population have found themselves trapped here. An unknown number have already died. But the survivors have not been abandoned.

And thanks to the incredible generosity of Daily Mail readers they will continue to get urgent help on the ground.

On Popovic Street – the main route out of town– across the bridge now collapsed into the Irpinka river, a white van is parked beside a burned out restaurant, next to a blast-shattered church.

On the side of the van is emblazoned perhaps the most iconic symbol of humanitarian relief in wartime. It tells you that the Red Cross is present in ruined Irpin. 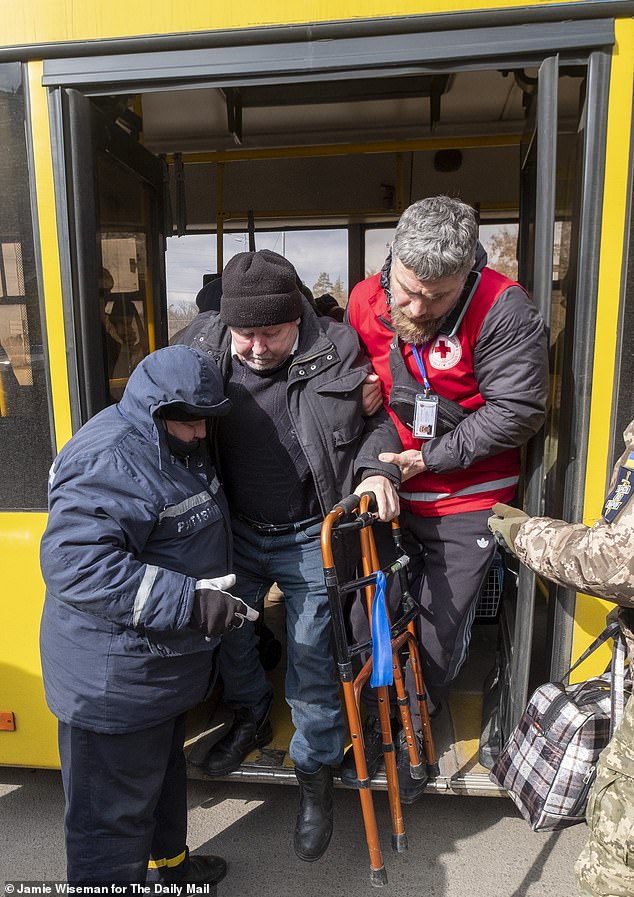 Tens of thousands of its civilian population have found themselves trapped here. An unknown number have already died. But the survivors have not been abandoned

As we pass, a volunteer crew is helping an elderly couple who have run the gauntlet of a dubious ceasefire into the back of their vehicle.

This is neither the time nor place to stop and chat, so I don’t know the names of the Red Cross personnel concerned. But what courage, what fortitude.

Again and again, they drive their unarmoured van backwards and forward beyond the evacuation buses that are parked out in the forest, beyond the last Ukrainian military checkpoint on the edge of Irpin and into the firing line.

The road surface here is covered in debris. Heavy mortars had pounded this section of the escape route a few days earlier, killing Tatiana Perebeinis, the chief accountant of a Silicon Valley start-up with headquarters in London, her daughter, Alise, 9, and son, Nikita, 18, as well as the family’s pet dogs. 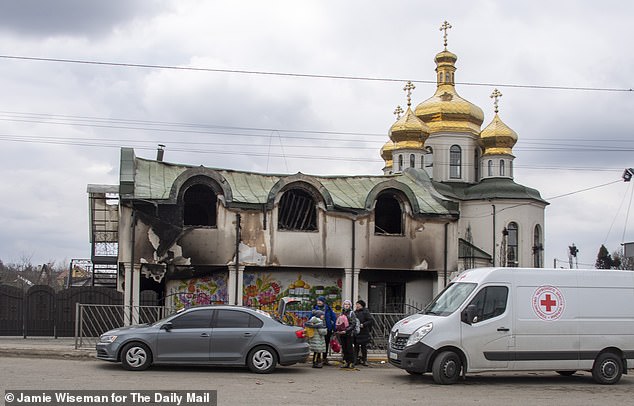 On the side of the van is emblazoned perhaps the most iconic symbol of humanitarian relief in wartime. It tells you that the Red Cross is present in ruined Irpin

The images of the family lying dead on the pavement amid their belongings caused horror around the world.

But thousands of others have escaped, thanks to the local Red Cross evacuation teams, working in conjunction with the state emergency services.

Of the £6million raised so for by the Mail Force Ukraine Appeal, £500,000 is directly funding Red Cross work in this country.

This week, the Mail spent two days witnessing that work, both at the front line and at one of the major railway hubs that has been overwhelmed by the refugee exodus from the fighting.

By last night more than 2.5million Ukrainians had left the country, most of them women and children. Their journeys often begin in places like Irpin.

Once they reach the evacuation buses, they are driven several miles through the forest to a check point where volunteers serve them hot drinks and cakes. 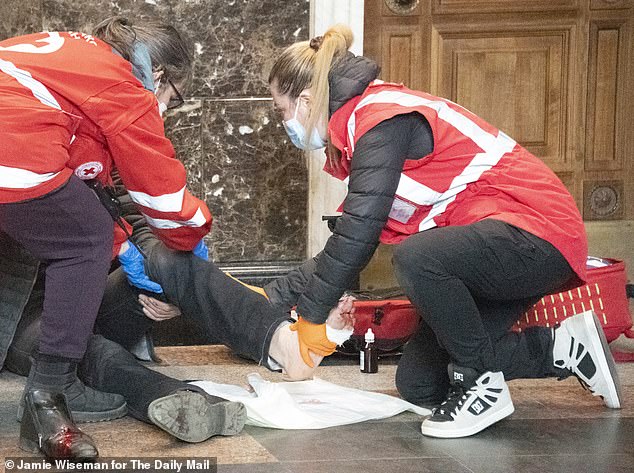 By last night more than 2.5million Ukrainians had left the country, most of them women and children. Their journeys often begin in places like Irpin

Those who are obviously in distress are taken into a tent and checked by Red Cross medics. It is outside this tent that we come across one young family; dentist Oleks, his wife Marina and their three year old son Dimi, pale faced and red eyed, chewing on a pastry. They have just got out, but the trauma is still with them.

‘I was so scared,’ says Marina. ‘We live on the boundary of Irpin and Bucha and there was such heavy fire last night. My parents are still there. They cannot move because of their poor health. Thank goodness Dimi doesn’t understand what is happening.’

Their next stop as new refugees will probably be Kyiv’s main railway station. And the Ukrainian Red Cross Society – the local branch of the international movement – will be there for them too.

Katarina is team leader for the organisation’s ‘first response’ team for this particular day shift that will last from 10am to 10pm. Their base is a small tent in a corner of one of the cavernous, Soviet-era waiting halls. 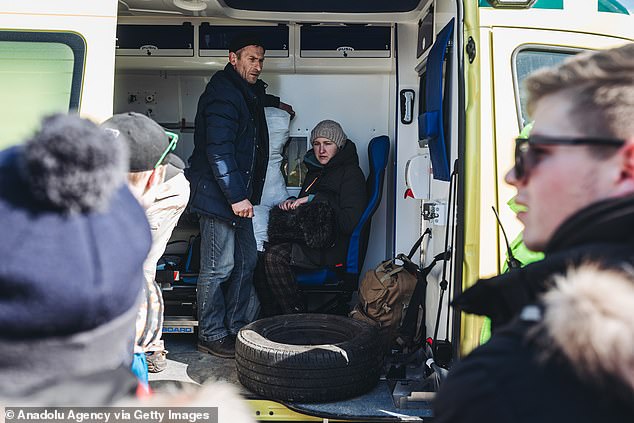 In peacetime, she is a theoretical physicist. She still is a wife and mother. But for the next twelve hours she will be responsible for providing help and comfort to the thousands of displaced who continue to pour through the capital towards the west and safety.

Among her team are two chemical scientists, Oleksa and Mikhail, Alina, a procurement manager and Irina, a nurse. A furniture designer, an IT specialist and medical students are in reserve.

‘It is a long day and a very long night,’ Katarina says. ‘Probably the worst times are when the evacuation buses or trains from the east arrive in the hours of darkness, unannounced. Then it’s like the apocalypse.

‘People are tired, frightened and disorientated and it is the elderly and disabled, and those women travelling alone with kids who suffer the most.’

She added: ‘We have had to deal with strokes, high blood pressure and people on the verge of collapse or in hysterics. A couple of days’ ago a woman had a heart attack and despite our best efforts we could not save her.’

The main hall is very cold at night and refugees often stay here for many hours because of the city-wide curfew outside.

‘Sometimes a hot drink and a comforting word is just enough to keep them going,’ says Katarina. ‘Other people see the Red Cross sign and it is reassuring. They come over just to talk to someone they can trust.’ 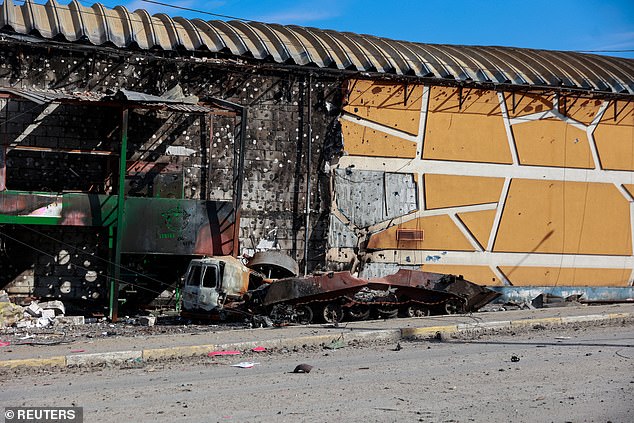 A destroyed vehicle is seen at the border between Bucha and Irpin, amid Russia’s invasion of Ukraine, in Irpin, Ukraine, today

The volunteers carry their own burdens. ‘It is a very stressful for us. Today we helped a woman from Bucha whose husband had been shot in front of her. You hear a dozen stories like that each shift and they stay with you.’

What do they still need? ‘We cannot have too much antiseptic solvents and bandages,’ she says. ‘And our front line evacuation people do not have any body armour or helmets. We also need more tourniquets. This is a war situation and we have evacuated a lot of people who had lost limbs.’

The Ukrainian Red Cross Society (URCS) has around 500 employees and 6,000 volunteers. While the Red Cross is a completely neutral humanitarian organization, that does not make it invulnerable.

Premises run by the URCS in Mariupol and a Kharkiv and a vehicle in Vyshhorod have been damaged by artillery fire, according to a local spokesman. But Katarina and her team soldier on.

She tells me: ‘Thank your readers so much for their generosity. We know that Britain is thinking of us. But we need more help. We’re on the verge of a humanitarian catastrophe.’