‘That time of year again’: Weather about to flip from hot to not

Despite a run of glorious sun-drenched days, Melbourne’s weather is about to take a dramatic turn, with a polar blast of air to bring the year’s first taste of winter.

Bureau of Meteorology duty forecaster Chris Arvier said he hoped people had made the most of the near 30 degree temperatures on Thursday, because it could be a long, long time before we see them again. 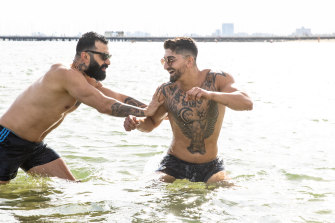 David Gorrguis (left) and Volkan Akdogan cooling off in the water on Thursday.Credit:Simon Schluter

“I wouldn’t be confident enough to say it’s the last final day of warm weather [before winter] but there’s nothing partially promising on the horizon,” he said.

The temperature on Melbourne on Thursday hit a balmy 29.3 degrees just after 2pm, while Laverton in the city’s west clocked 31.1 degrees at 1:55pm. The heat was still increasing in the state’s north with Mildura hitting a 31.5 degrees just after 4pm.

But two cold fronts – one overnight Thursday and another on Saturday night – are set to whip up freezing winds off the southern ocean bringing rain and snow and temperatures barely rising above the mid-teens.

“We’ve got a real doozy of a cold front on the way,” Mr Arvier said. “It’s a pretty dramatic swing in the temperatures in particular.” 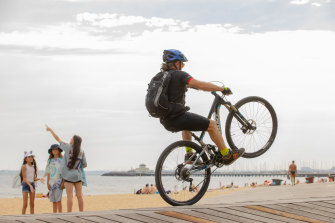 A cyclist pulls a wheelie at St Kilda beach on Thursday. Credit:Simon Schluter

“It’s that time of year again,” he said.

Friday will bring the highest rainfall of the weekend in Melbourne, with up to 5 millimetres expected in the city, with a top temperature of 17 and a minimum of 13 degrees.

The forecast low for Saturday and Sunday is a chilly 10 degrees, with maximum temperatures of 19 and 15 respectively.

The coldest air will be behind the second front due through on Saturday, meaning Sunday will be “very, very cold and quite windy”, according to Mr Arvier.

Snow is expected to settle down to 1000 metres above sea level on Sunday, so places such as the Mount Baw Baw plateau will probably receive a good dusting, Mr Arvier said.

“There’s possible hail and thunderstorms in parts of the state as well,” he said, suggesting the exposed coastal areas of the Otways and Wilsons Promontory would cop the worst of the winds.

But many of the swimmers and strollers who were enjoying the sunshine at St Kilda beach on Thursday afternoon were unaware that they were seeing the last of the good weather for a while. 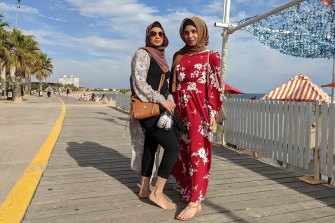 “I love this weather, it’s not too hot,” said Saba, 21, who will avoid the weekend chill when she returns to her home in Sydney on Friday.

Her friend Iqra, 22, said she planned to use the drizzly weekend weather to get stuck back into her university studies.

Paul Nguyen, who travels from his CBD home to St Kilda once a week to swim in the bay during the summer conceded he may soon have to revert to his winter exercise regime of running. 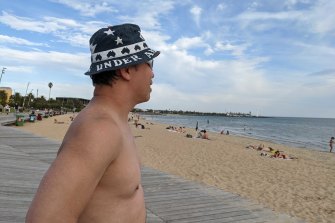 Paul Nguyen had his last ocean swim before the weekend’s wintry blast forces his to pack away his flippers.Credit:Rachael Dexter

“Today’s just been awesome, it could not be better,” Mr Nguyen said after he’d completed a 400-metre swim between two offshore markers.

He said once the weather dropped below 20 degrees, it was time to trade in his flippers for runners.

“I don’t like really chill wind,” he said. “It gets really freezing you know?”