The contradiction at the heart of China’s rise

The Chinese Communist Party can take credit for two breakthrough events that occurred on the same day last week.

In one, Beijing launched three astronauts into the stratosphere to build China’s first space station. In the other, 500 police officers raided a newspaper office in Hong Kong to arrest five executives for allegedly endangering national security.

The first showcases the stunning ascent of China into prosperity and advanced science; the second its dismal descent into tyranny. 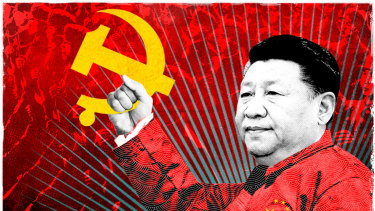 As China prepares to celebrate next week the 100th birthday of the Chinese Communist Party, these two events, carefully stage-managed, capture perfectly the paradox at the core of the regime.

Its economic flourishing, on a scale without precedent, has liberated vast human potential. By raising 850 million people out of poverty in the last 40 years, according to the World Bank’s reckoning, China has given its people comforts and opportunities that earlier generations had always dreamed of but never attained.

And by its tech-enabled totalitarianism, it is systematically shackling vast human potential. By denying its people the right to freely think, speak, create, worship, vote, China is infantalising one-sixth of the human race.

Both of last week’s events were political. China’s space program is part of its claim to be a full-spectrum superpower. It landed a rover on Mars last month. Not content to be a peer competitor of the US, it aims to overtake America, and in some key scientific fields it already has. The Tiangong or “heavenly palace” is the first space station to be run by a single country.

It is not enough to be a great stride for China. The astronauts are all members of the Chinese Communist Party. “They may establish an extraterrestrial party branch,” said the official Xinhua news agency, straight faced.

The space program, according to mission commander Nie Haisheng, “has crystallised the Chinese people’s thousand-year dream of flying to the sky, and added a heroic chapter to the 100-year history of struggle of the party.”

This is standard practice. The party always conflates the nation of China and the people of China with the party. The purpose, of course, is to make the party inseparable from patriotic pride.

The police raid on the headquarters of the Apple Daily news group also broke new ground. The Basic Law, Hong Kong’s de facto constitution enacted by Beijing in 1990, guarantees free speech and a free press as well as other liberties. 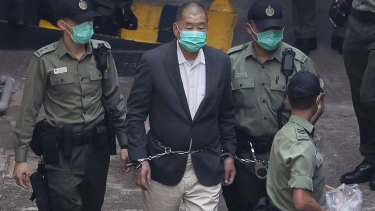 Hong Kong pro-democracy activist and media tycoon Jimmy Lai is escorted to a prison van before appearing in a court, in December.Credit:AP

Any such freedoms were extinguished when Beijing imposed its National Security Law on Hong Kong last year, banning political parties and arresting politicians with whom it disagrees.

The Apple Daily’s editorial position is pro-democracy. And while its proprietor, the mogul Jimmy Lai, is already in jail for supporting street protests, last week’s raid was a new encroachment on media freedom – it was the first time that published content was the basis for the arrests, and the seizure of $HK18 million (about $3 million) was the first confiscation from a media company rather than an individual.

In other words, putting the newspaper’s owner in jail wasn’t enough. Chinese President Xi Jinping is going after the company, too, arresting its top officers and editors. The theatrical flourish of sending 500 police officers to arrest five people was designed to be as intimidating as possible.

Leading the raid, Superintendent Steve Li said that Apple Daily had been calling on foreign nations to impose sanctions on the Beijing government for violating Hong Kong’s freedoms. This represented “collusion” with foreign powers. “If you have no real reason to share these types of articles, I would advise everyone not to,” Li told a press conference.

It was Deng Xiaoping who opened China’s era of pro-market growth in 1978. He overturned Mao’s collectivism with his bold declaration that “to get rich is glorious”.

The economic growth that followed was, in some ways, a mere validation of the East Asian economic “miracle” pioneered by Japan after World War II and imitated by South Korea, Singapore and Taiwan.

Like China, all these places put Confucian emphasis on education, thrift and hard work. Like China, their rapid growth formula policy was state-led but pro-market, export driven but highly globalised, mercantilist yet entrepreneurial.

China’s unique contribution was to achieve the same deliberate, high-speed development on a scale without precedent – in a country with a billion people. It had been thought impossible.

This means that no country any longer has an excuse to leave its people mired in persistent poverty. We now know the formula for deliberate, rapid growth for countries of any size.

But where the other East Asian miracles allowed their citizens increasing freedoms along with growing prosperity, China is ruthlessly determined to repress its. Among its repressive successes is its rigorous control and censorship of the internet. It had been thought impossible, Bill Clinton said it would be like trying to “nail Jell-O to the wall”. Beijing nailed it anyway.

Why? Because the Chinese Communist Party ultimately exists not to empower its people but to serve its own power. Australian sinologist Geremie Barme describes the party’s achievement as “magnificent” but poses: “At what social cost? We have some idea of the cost in Tibet, in Xinjiang, and we have a clear idea of the cost in Hong Kong unfolding right in front of us – the thorough dismantling of civil society. People are not allowed to be equal participants in their own society, not allowed to mature as citizens.”

This paradox – material liberalisation with civil shackling – was described during Mao’s reign by the philosopher Isaiah Berlin as “the artificial dialectic”.

He said in 1951 that it was “as mechanically powerful and comprehensive an instrument for the management of human beings – for simultaneously breaking their wills and developing their maximum capacities for organised material production – as any dreamt of by the most ruthless and megalomaniac capitalist exploiter”.

According to Berlin, it was “the most important, most inhuman and still the most imperfectly understood phenomenon of our times”. He might have been writing today. Few thought the party could survive so long, yet here we are at its centenary.